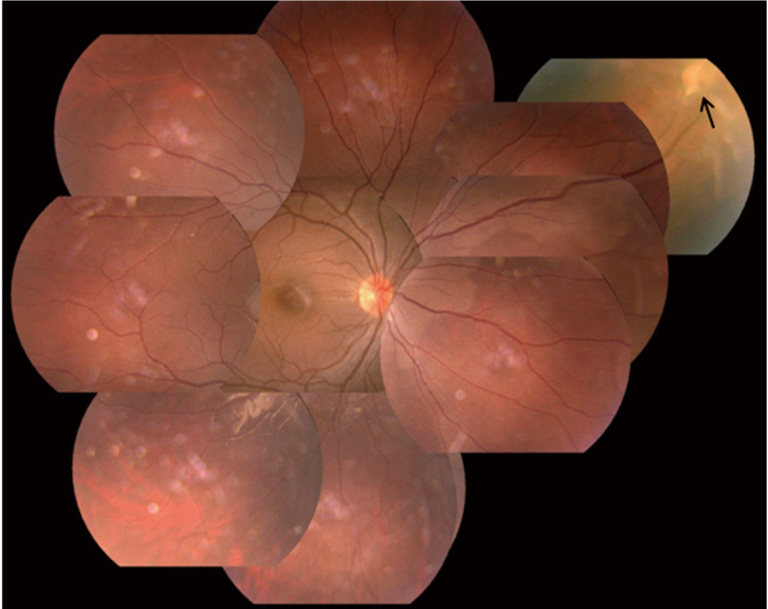 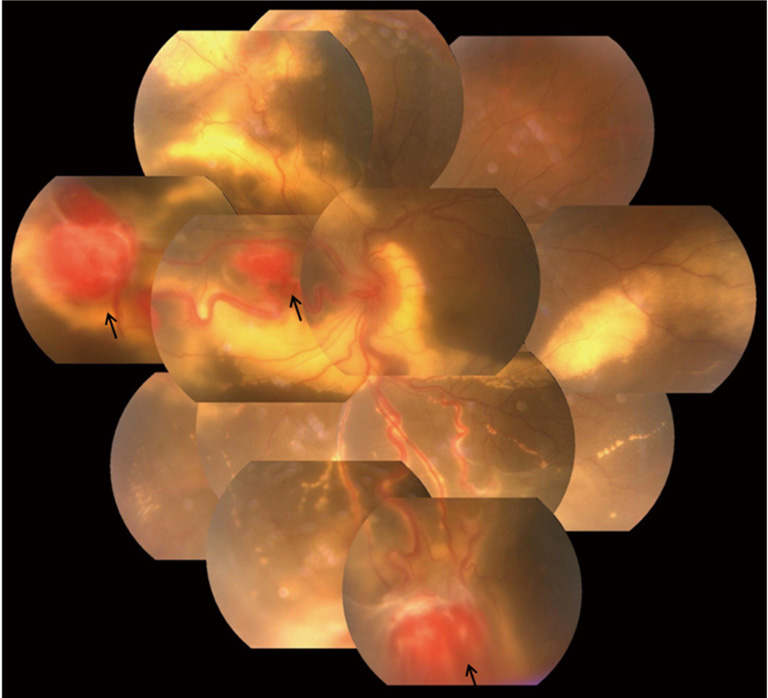 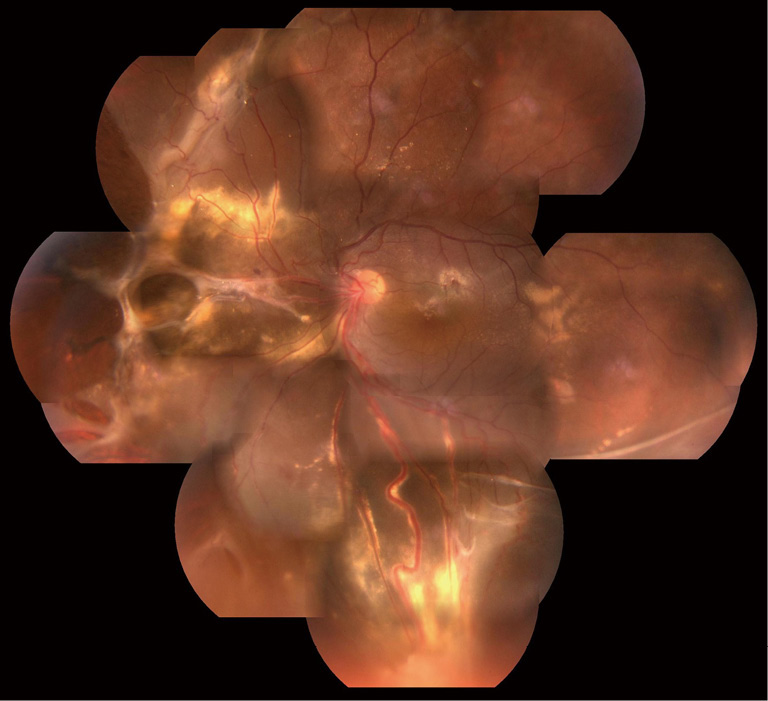 Figure 3 Fundus photograph illustrating flat retina and the resection sites of the nasal retinal hemangioblastomas in the left eye.

A 41-year-old man presented to ZOC with complaining of decreased visual acuity of the right eye for 6 months. There was no improvement of visual acuity after taking traditional Chinese medicine in a local hospital. There was no other eye disease history or systematic disease. Best corrected visual acuity (BCVA) was 0.5 (20/40) in right eye and 1.0 (20/20) in left eye. Intraocular pressure was normal in both eyes. No abnormality was found in the anterior segment. Serous detachment of sensory retina and pigmented changes were found in macular area and fundus fluorescence angiography (FFA) showed focal leakage near fovea of the right eye (Figure 5). Subretinal fluid (SRF) with small gray-white subretinal precipitates and rough retinal pigment epithelium (RPE) layer in macula were seen on optical coherence tomography (OCT) (Figure 6). Based on the above examinations, chronic central serous chorioretinopathy (CSC) in the right eye was diagnosed. Half-dose photodynamic therapy (PDT) was performed for his right eye after informed consent was obtained. However, persistent SRF was found at the 1-, 3- and 6-month follow-up (Figure 7). BCVA remained 0.5 (20/40). Meanwhile, macular sensitivity was decreased gradually. At this time, we advised the patient to take the second-time half-dose PDT. But he rejected our advice for economic reason and received the subthreshold micropulse laser photocoagulation (SMLP). The parameter of SMLP was as follows: model, micropulse model; duty cycle, 5%; exposure time, 200 ms; laser spots, 100 µm; power, 675 mw (50% of titration power). Three months after the SMLP treatment, SRF was absorbed completely on OCT images (Figure 8), and macular sensitivity improved from 14.6 to 25.6 dB (Figure 9) and BCVA increased to 1.0 (20/20). No obvious retinal damage could be observed on fundus autofluorescence (FAF) images.

Figure 8 OCT images of the macular area at the 1-month (A), 3-month (B) and 6-month (C) follow-up after SMLP showed that SRF was absorbed completely in 3 and 6 months. OCT, optical coherence tomography; SMLP, subthreshold micropulse laser photocoagulation; SRF, subretinal fluid.

Chronic CSC is a common macular disease in younger adult and often leads to visual impairment due to retinal neurosensory detachment and RPE damage (6). Conventional laser photocoagulation can shorten duration and accelerate the resolution of the SRF, while this treatment is not suitable for macular leaking spot near fovea (7). So far, half-dose PDT is the first line treatment in the leakage spots close to fovea for chronic CSC (8,9). However, there is no answer to how to treat the chronic CSC with persistent SRF after PDT, just like this case. Professors Murphy and Olsen agreed that the advent of SMLP enriched the options for the treatment of CSC (10,11). Professor Jin, the attending ophthalmologist of this case, believed that the experience in this case showed SMLP was a potential option for CSC without obvious retinal damage. SMLP is a novel laser delivery modality for the retinal disease treatment in recent years. Professor Jin described that in the micropulse model, laser energy is dispensed in a burn or envelope of micropulse that consists of the “ON” time and the “OFF” time. The “ON” time is the duration of each micropulse and the “OFF” time between successive micropulse allows the heat to cool down, which can minimize the heat destruction to the adjacent tissue (12). In this case, through the SMLP treatment, the patient with persistent SRF after PDT got satisfactory anatomy and visual function improvement. In a word, SMLP has many advantages, for example, inexpensive, repeating treatment and no obvious damage to retina. It may be a good option for the treatment of persistent SRF of CSC after PDT (13), especially for those with leaking spot near fovea.

A 6-year-old boy with a chief complaint of poor vision in his left eye for over one month was presented to ZOC. The boy is a full-term baby given birth by caesarean section. He had a medical history of thalassemia. His family members were claimed healthy. The corrected visual acuity was 0.5 (20/40) on the right and no light perception on the left. Intraocular pressure was 11 mmHg on the right and 14 mmHg on the left. In the left eye, mydriasis and disappeared direct light reflex was observed without nystagmus and strabismus (Figure 10). Bilateral optic disks were enlarged and pale (Figure 11). Ultrasound biomicroscopy (UBM) showed open angle of the anterior chamber in both eyes; ultrasonography showed normal axial length of both eyes; FFA showed no obvious leakage in early and late phase; OCT showed a cyst cavity in the left macular neurosensory layer; ANGIO OCT showed disconnected blood vessels in bilateral optic disk and narrower blood vessels in the left eye; visual evoked potentia (VEP) showed PVEP reaction of each box was severely abnormal on the right and FVEP reaction was severely abnormal on the left; electroretinogram (ERG) showed normal reaction of rod cells ; slightly abnormal reaction of cone cells on the right and slightly abnormal reaction of rod cells ; moderately abnormal reaction of cone cells on the left. Furthermore, craniocerebral imageology examinations were applied: magnetic resonance imaging (MRI) showed partly empty sella turcica, Galen venous malformation and choroidal fissure cyst; neuro high resolution MRI showed thin optic nerve and maldevelopment of olfactory bulb, olfactory cleft and olfactory tract. Blood and urine tests showed microcytic hypochromic anemia, low FSH, LH, and testosterone level and positive urine protein. The boy’s appearance was special: deep eye socket and a squared skull (Figure 12); curving left index finger and wide gap between toes.

Figure 10 Photographs of both eyes illustrating mydriasis and disappeared direct light reflex in the left eye (B).

Figure 12 Photographs show the special appearance of the boy: deep eye socket and a squared skull.

All the retinal specialists in the clinical round agreed that it was a very challenging case with a presumptive diagnosis of “optic disk coloboma combining with optic nerve hypoplasia” and some systemic abnormalities. Professor Jie Hu, the attending ophthalmologist of this case, explained that the positive findings of this boy aroused our thought that whether the abnormity is with a kind of possible syndrome (such as Kallmann syndrome or septo-optic dysplasia, etc.) or a primary optic disc coloboma combining with optic nerve dysplasia. All the syndromes mentioned above have some matched points and some discrepant points: Kallmann syndrome also have maldevelopmented of olfactory bulb, olfactory cleft and olfactory tract and low gonadal hormone level (14). However, no ocular complications were ever reported in Kallmann syndrome and this boy’s sense of smell was normal; septo-optic dysplasia can also have optic nerve hypoplasia, endocrine disorders and partly empty sella turcica (15). Interestingly, no sign of septum pellucidum agenesis were found in MRI and only gonadal hormone were affected. Professors Chew, Murphy and Olsen all emphasized that when we meet patients having optic nerve hypoplasia, we should be sensitive to the underlying abnormalities of the central nervous system and abnormal hormone level. Professor Chi-Chao Chan suggested to consult with Dr. Brian Brooks of National Eye Institute, National Institutes of Health, an expert in ocular coloboma (16). Dr. Brooks advised to follow-up the patient’s renal function because these patients would have a greater chance developing nephropathy.

A 26-year-old woman presented to ZOC with decreased vision of her left eye for several years and got worse for 2 weeks. Her right eye had been blind since her childhood. No ophthalmic past history or family history had been mentioned. On examination, the BCVA was no light perception in the right eye (OD) and 0.1 (20/200) in the left eye (OS). The intraocular pressure was 10.0 mmHg OD and 12.3 mmHg OS. There was microcornea and corneal leucoma in the right eye. The ocular abnormalities of the left eye included inferior iris coloboma, cataracts with specific inferior lens notching and lens zonule disruption (Figure 13), optic disc atrophy and inferior choroidal coloboma (Figure 14). The B-scan ultrasonography of the left eye showed a RD. The 23 G pars planar lensectomy and vitrectomy, drainage retinotomy, heavy liquid, endolaser, peripheral iridotomy, heavy liquid-air exchange and air-silicone oil exchange was performed. No retinal break was found during the surgery. Her retina remained attached up to the last visit (two weeks postoperatively). 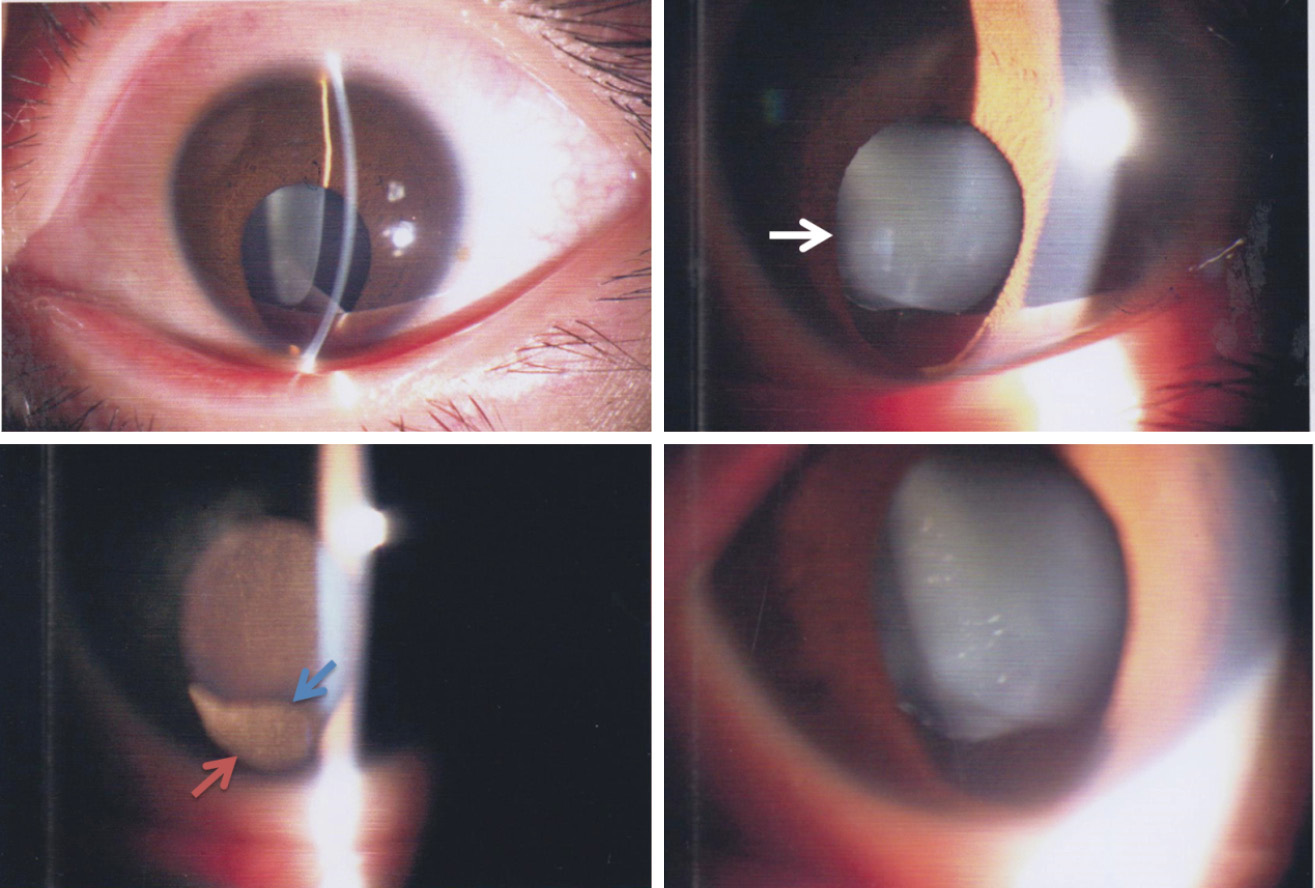 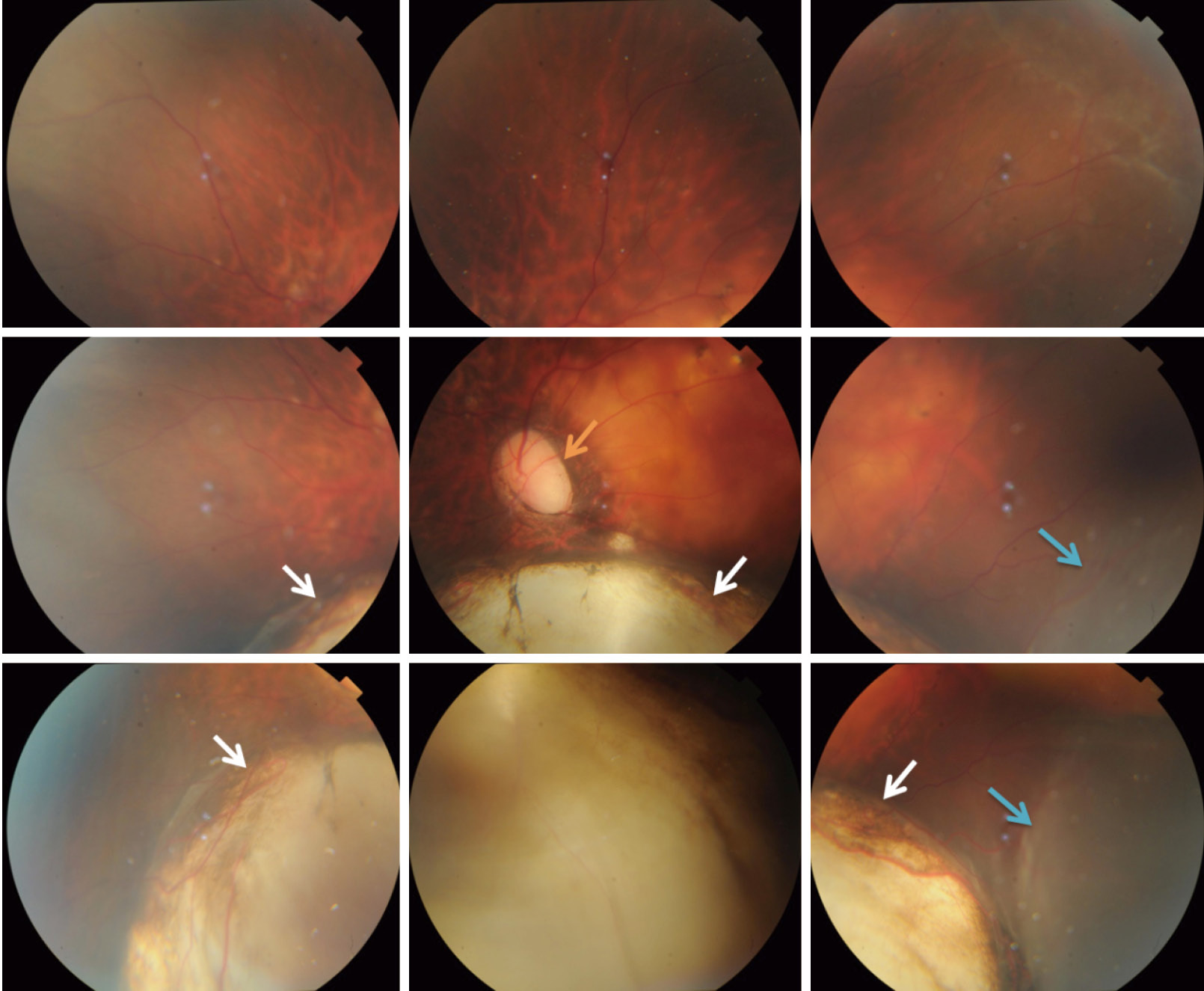 Congenital iridolenticular choroidal coloboma is a rare condition caused by failure of the optic fissure to close (17). This case was a classic defect including partial absence of the inferior quadrant of the iris, choroid, and retina. Surgical treatment was necessary for dealing with the complications of cataract and RD (18). The surgical options of this case were discussed. Pars planar vitrectomy was recommended as the primary choice (19). Prof. Olsen suggested meticulous releasing vitreous traction at the disc and coloboma, carefully searching of the retinal break, and barricading endolaser onto the edge of coloboma. The peripheral iridotomy was not recommended, because of the existing inferior iris coloboma. Professor Lin Lu, the chief director of Fundus Diseases Center of ZOC, specialist in vitreous surgery, thought that primary cataract surgery was only needed if the lens opacity interfered the view of vitrectomy. Silicone oil tamponade was approved in this case. But the caution of silicone oil shifting through the optic nerve tube was mentioned, since there was optic disc atrophy in this case. The duration of silicone oil tamponade was recommended for 3–6 months or longer, considering of the difficulty of retina adherence of the edge of the coloboma.

Over all, the discussion of these four challenging and unusual retinal cases allow us better understanding of the complexity of the fundus diseases, the relationship between fundus and systemic disorders, and the difficulties of managing these cases.