The main objective of strabismus surgery is to improve the visual axis alignment of the eyes and as well restore binocular single vision (1). Many researchers reported in the literature astigmatic and refractive changes after routine strabismus surgery, which may contribute to a negative impact on the visual acuity. However, the exact influence of strabismus surgery on refraction, corneal, and anterior chamber parameters is controversial. Some concluded postoperative myopic shift with steepening of the cornea (2,3), others found hypermetropic with flattening (4). Others found no changes of corneal parameters (5,6). Moreover, astigmatic changes after routine successful strabismus surgeries were recorded and still debatable. Some authors considered a decrease in the meridian power of the recessed muscle (7-9), while others found an increase of this meridian power (5). Regarding the duration of these changes; some reported non-considerable (2) and temporary (7) effects. Whereas others concluded significant (7) and long-term changes (4,10).

Despite the published results of this topic, the role of extraocular muscle (EOM) tension on corneal shape and parameters is still a matter that has limited coverage in the literature, plus the exact impact of the EOMs contraction and relaxation on corneal topography is still poorly understood. So, the current study was designed to record the corneal changes, and anterior chamber depth changes after performing recession versus resection of horizontal recti muscles.

Patients attended to the outpatients’ clinic of Mansoura Ophthalmic Center. They underwent Strabismus surgery, either isolated recession or resection of horizontal recti. (23 cases – 36 eyes) were enrolled prospectively from February 2014 to January 2015. Excluded patients were uncooperative patients to maintain fixation during Pentacam examination. Informed consents and ethical approval were obtained, and adhered to the Declaration of Helsinki (IRB: R/17.05.119).

Surgeries were performed in the operating theater of Mansoura Ophthalmic Center, Mansoura University. And all performed under general anesthesia. The surgery was performed through a conjunctival incision (limbal incision). Dissection of Tenon’s capsule, episcleral tissues, and intermuscular septum to isolate the horizontal recti muscle. Conventional recession to the new adjusted scleral insertion site was performed using double-armed 6/0 Vicryl suture. Conventional resection was performed by excision of the adjusted amount of the muscle and reinserted at its normal scleral insertion site by using double-armed 6/0 vicryl suture. The sutures were tied securely with 3-2-1 knot both at recession and resection.

All patients were examined preoperatively by Scheimpflug corneal tomography (topography modeling system, Tomy, TMS-5). Applying the Ring-Topo mode first, aligning the refraction of the laser light on the center of the first mire ring automatically for TMS-5 measurement. The unit avoids the offset of the alignment in addition to the patient blinking problems with a very short image capture time of 0.5 sec. The TMS-5 automatically captured multiple slices by focusing the alignment light on the center of the cornea as it does with Ring Topography (in the Scheimpflug mode,). The time needed to measure this mode is approximately 0.5 to 1.0 seconds. The patients were properly positioned on the chin rest with a forehead strap and asked them to blink several times and stare at a fixed target. After obtaining the proper alignment, automatic release mode was started. The images were captured (4 images maximum/each eye), 0.5 sec/image. The Pentacam maps were recorded and analyzed. The posterior and anterior corneal surface parameters were analyzed by a Scheimpflug system, including corneal dioptric power at the flattest meridian in the 3-mm central zone (K1), corneal dioptric power in the steepest meridian in the 3-mm central zone (K2) and mean corneal power in the 3-mm zone (mean K). A pachymetric map was also analyzed, including the central corneal thickness (CCT) at the apex of the geometric center and corneal thickness at the thinnest point. Scheimpflug images of the patients were performed just before surgery, one month, and 3 months postoperative. For Pentacam measurements, the patient sat on a chair and the patient’s chin was placed on the chin rest and the forehead was pressed against the forehead strap in standard dim light condition. The patients were instructed to maintain fixation into a black spot in the middle of the fixation beam, with keeping opened eyes. During that, the researcher watched the monitor and brought the image to be centralized within the aiming circle, and focused. When a satisfactory clear image was obtained; the instrument automatically recorded the Scheimpflug images. The soft reconstructed the three-dimensional image and calculated the parameters of the anterior chamber. Therefore, main outcomes were: Keratometry values in the steepest and flattest meridians (K1, K2), mean K, central anterior chamber depth (CACD), central anterior corneal elevation (CACE), central posterior corneal elevation (CPCE).

This study included 36 eyes of 23 patients, 24 eyes were performed isolated horizontal rectus muscle recession (group 1), and 12 eyes were performed isolated muscle resection (group 2). Demographic data of all patients are shown in Table 1. The difference between preoperative anterior segment parameters of both groups was nonsignificant as shown in Table 2. The parameters were measured one month, and three months postoperative, the results were compared within each group (Tables 3,4). It showed that non-significant changes of all parameters of the resection group by preoperative, one month, and three months postoperative. While recession group showed significant changes of the mean k reading after one month, but it became nonsignificant after 3 months. Comparing the parameters of both groups after one month and 3 months showed significant changes in both CACD, and CACE after one month. CACD became non-significant after 3 months, while CACE still significant, as shown in Tables 5,6. 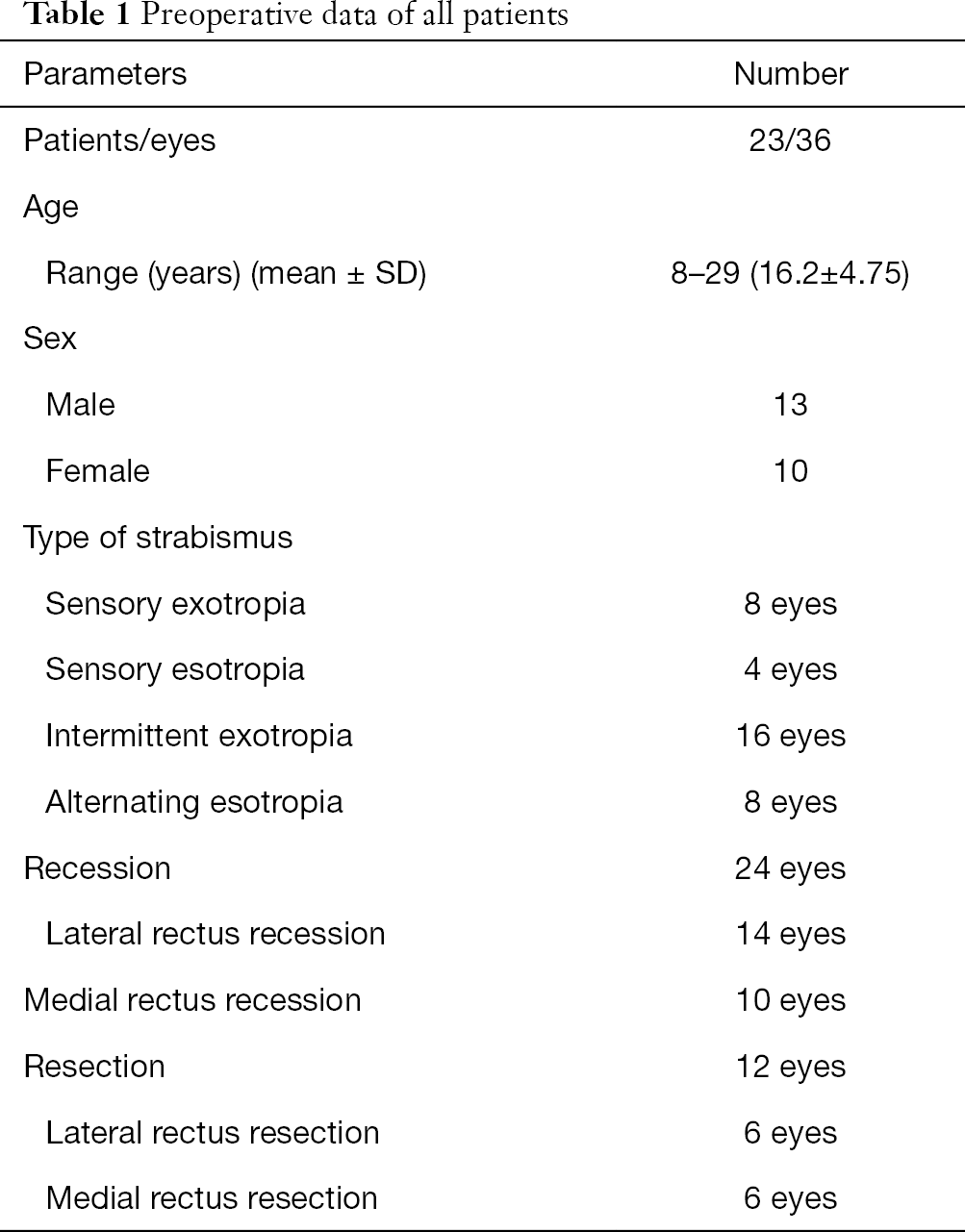 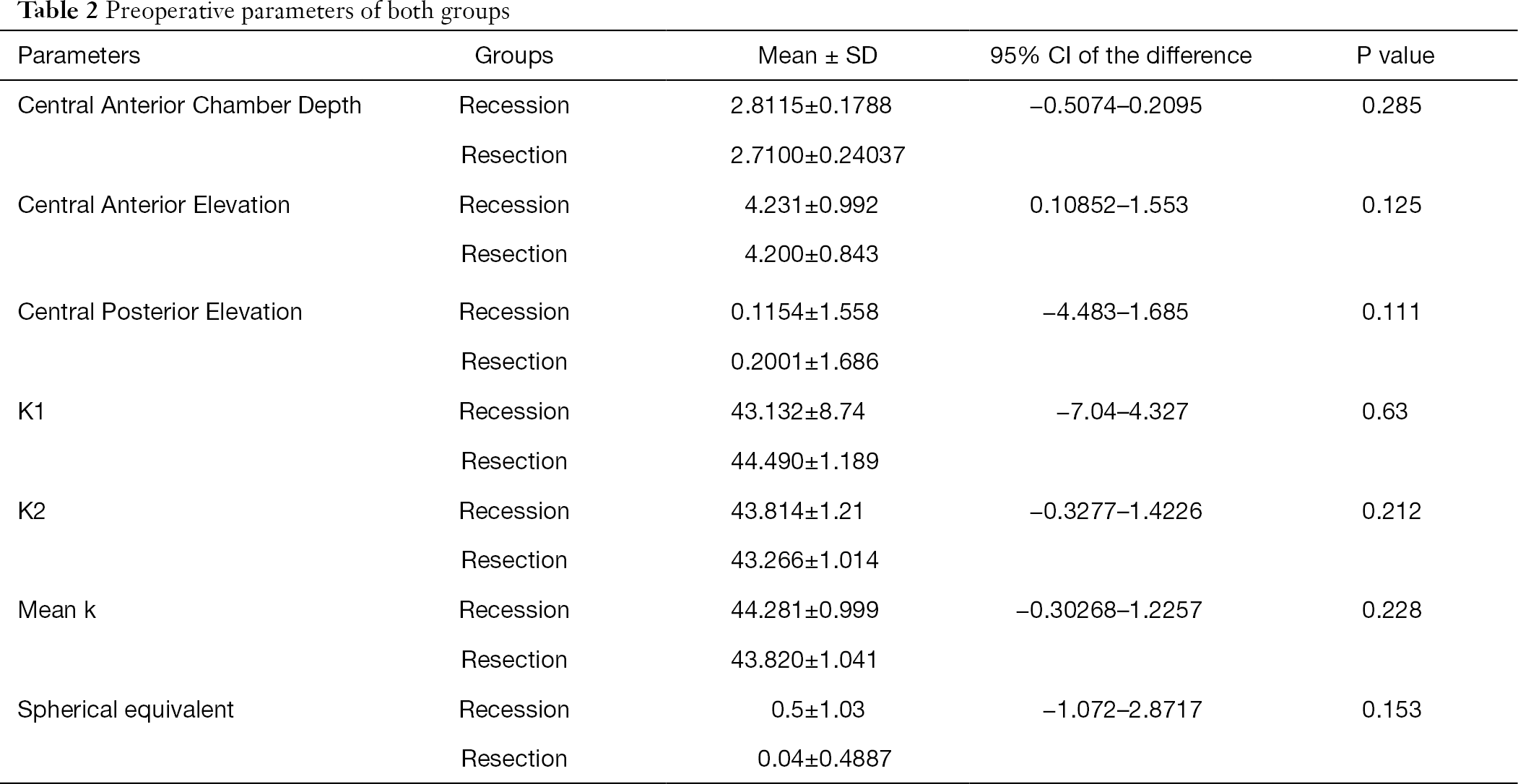 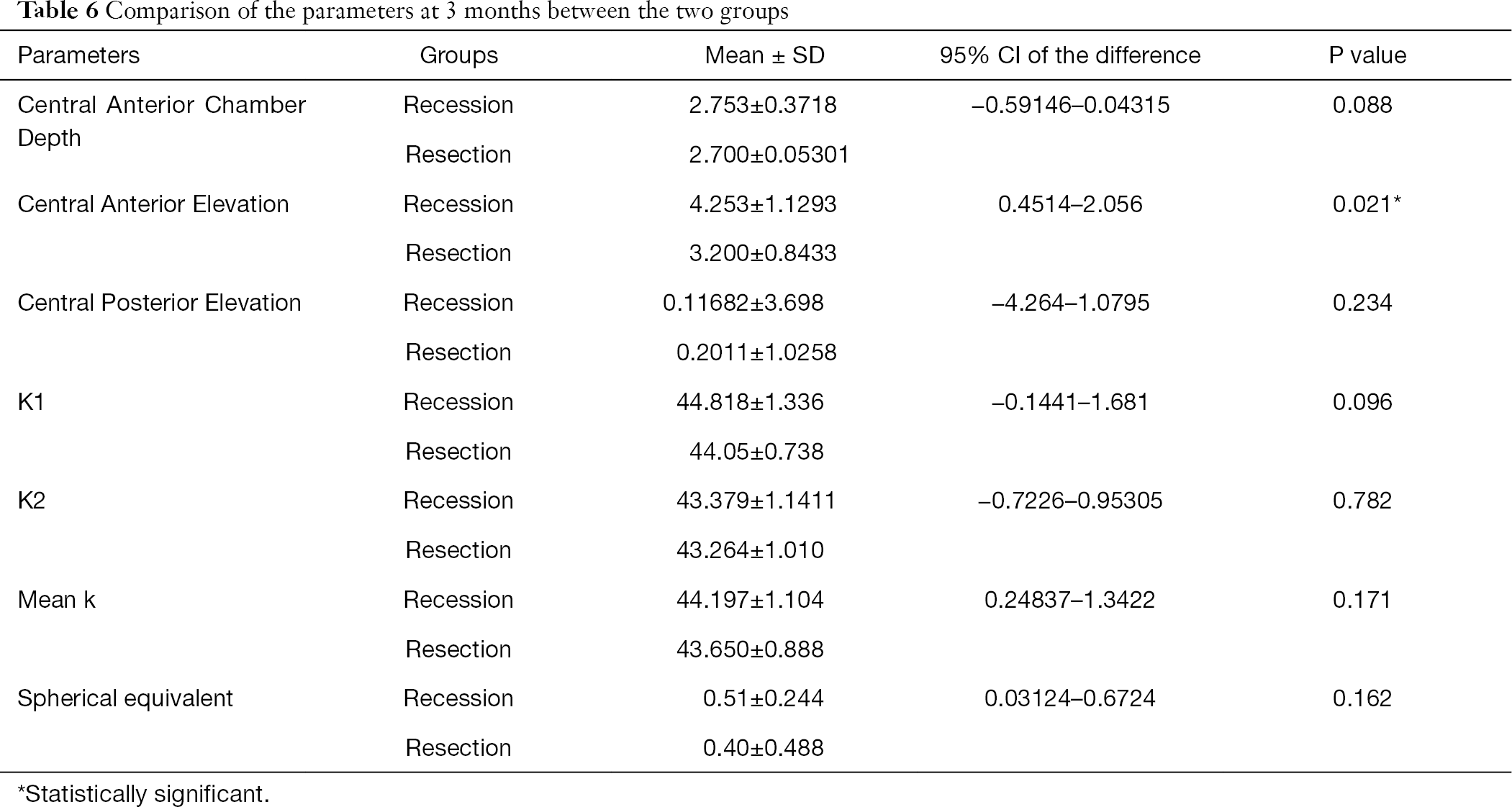 The relations between strabismus surgery and refractive changes are controversial, some reported major changes of astigmatism up to 60% of patients (11). Others reported a weaker relation between both, with the result, a transient astigmatic change after horizontal rectus muscle surgery (4,12). Corneal parameters changes after strabismus surgery may be secondary to tension performed by the extraocular muscles on the sclera and transmitted to the cornea (5,8,13). The hypothesis of flattening of the cornea during convergence has been accepted as an important documentation of the effect of extraocular muscle tension on the cornea (12). Pentacam as a specific three-dimensional analyzer that allows accurate assessment of keratometric reading, anterior and posterior corneal elevation, anterior chamber depth (14). We use it for accurate measurement of anterior segment changes after rectus muscle surgery. Our study compared the effect of rectus muscle resection versus recession on corneal parameters and CACD, we found a transient change of mean K of the recession group at the end of 1st month, that return non-significant at the end of 3 months, this may be explained by Kwito et al., they reported that the weakening of rectus muscles may cause corneal flattening and a decrease in power of all meridians (15).

Also, it was found that no correlation between the amount of surgical recession and refractive changes postoperatively (16). While in the resection group there was nonsignificant changes of the mean K till the end 3 months. This was in the consistency of many reports that found increasing of keratometric reading early postoperative and decrease to its former value after 3 months. In rare cases induced significant keratometric changes may persist that requires a subsequent correction (17).When we compare both recession and resection groups we found a significant difference in the CACE, this may be explained by corneal flattening that was observed after recession surgery, while steepening was induced after performing a resection (5,7,11). This may explain significant CACE that was found in resection group in comparison to recession group. A study was performed to compare a single recession and resection plus resection of horizontal muscles, they reported in their results that altered muscle tension did not perform any effect on corneal parameters in a group of single muscle recession, while in a recession plus resection group there were changes in the parameters (18). CACD was significantly changed in the end of the first month when we compared both groups but returned nonsignificant after 3 months. This was in association with many studies they found significant changes of anterior chamber parameters, that returned to baseline (18,19). The etiology of early anterior segment parameters changes within the first month is unknown but could be due to postoperative tissue edema, the healing process, interruption of the ciliary body circulation, and changes of muscle tension that affect remodeling of the cornea. The regression of the parameters after 1 month may be due to the compensation by other quadrants of the eye, or due to the resolution of the effect of surgical trauma. Tissue healing and remodeling did not occur within one month, but still, occur up to 3–6 months (19). In our study return of most of the parameters to the preoperative baseline occurred at the end of 3 months, except central anterior corneal elevation it remained significant. So, longer follow-up was a limitation of this study for clearer documentation.

In recession group, the mean K was the only statistically significant variable in the first month after surgery. Comparing both groups, the anterior corneal elevation, and central anterior chamber depth revealed a significant difference by the end of the first postoperative month. After 3 months, all parameters showed a statistically insignificant difference between the recession and resection groups except the anterior corneal elevation.

Ethical Statement: The authors are accountable for all aspects of the work in ensuring that questions related to the accuracy or integrity of any part of the work are appropriately investigated and resolved. Informed consents and ethical approval were obtained, and adhered to the Declaration of Helsinki (IRB: R/17.05.119).