Retina is a sophisticated neural structure that perceive visual information, transform it into electrical signal and send it to the brain. The retinal photoreceptors are the primary neural cells that transform light into graded electrical signals. With accelerating aging population, blindness diseases with symptoms of photoreceptor degeneration, such as age-related macular degeneration, are showing higher incidence, and pose severe challenges to public health management. Luckily, the inner retina, especially the relay to the brain—the retinal ganglion cells (RGC), are largely spared in many such diseases, and provide the possibility for retinal prosthesis to help patients with photoreceptor degeneration.

RGCs are the neurons that encode visual information into electrical signals in the form of action potential, and relay this information to the brain. Retina prosthesis aims to replace the degenerated photoreceptors and provide electrical input to RGCs (Figure 1). Although there are several stem-cell and gene-therapy based solution on market, it is the retina prosthesis that has the longest development history [the notion even can be dated back to the 18th century (1)], and provide some of the most advanced outcomes in terms of restoring visual function for patient with degenerated photoreceptor [e.g., (2,3)]. So far three devices in this category have been approved to enter the clinical market: the Argus II Retinal Prosthesis System, the Intelligent Retinal Implant System (IRIS) II, and the Alpha AMS. Though suffered from low resolution and biosafety problems, retina prothesis still holds the great promise for actual functional treatment for blindness in the near future.

Figure 1 The workflow of retinal prosthesis. A camera converted light signal into electrical signals; these electrical signals were used by multi-electrode array to generated stimulation and evoked retinal ganglion cells to fire action potentials. These action potentials were autonomously relayed into brains. The multi-electrode array was implanted intraocularly.

To achieve its ideal, there are several major obstacles the retina prosthesis research field must tackle, quite a few of which are retina-biology related. We’ll focus on the conflicting demand of stimulation effectiveness and retina biosafety concern, and the stimulus precision constraint imposed by the retinal structure and physiology.

One key component of retinal prosthesis is the electrode array implant. In the epiretinal implant scenario, these microelectrodes contact the vitreal side of the retina, and stimulate retinal ganglion cells according to the visual signal the array received, thus relay visual information to the brain (Figure 1). Retinal ganglion cells generated action potential in response to electrical stimulation (Figure 2). To be activated to relay the visual information in the form of action potentials, RGCs require the stimulus to reach certain threshold. There are differences among individual RGCs’ activation threshold, which can be further amplified by the distance between the electrodes and RGCs. Intuitively, the more intense the stimulus, the more RGCs will be activated. However, extreme stimulus intensity certainly will damage the retina tissue (4). Therefore, optimization of the stimulus intensity is needed. 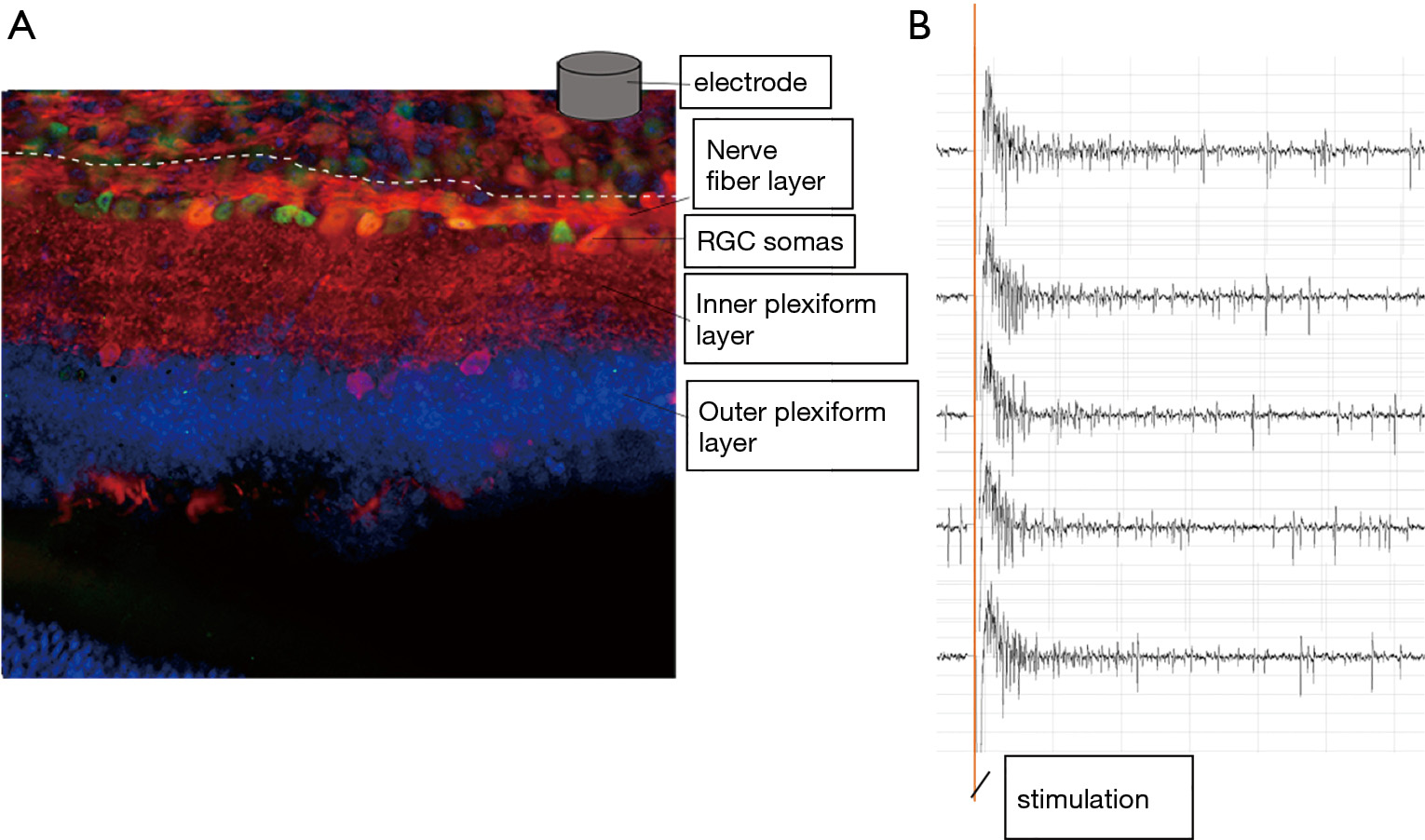 Figure 2 The diagram showing how the electrodes of retinal prosthesis work. (A) A side view of the mouse retina from its edge. Note that the electrode directly contacted the nerve fiber layer, which sat right above the retinal ganglion cell somas. (B) Raw traces of electrophysiological recording of retinal ganglion cells’ responses to electrical stimulation. Note that the frequency of action potential drastically increased right after stimulation.

Currently indicators of RGCs’ health are still lacking in the research field. Several death pathways can be envisioned during extreme stimulation, including apoptosis and necroptosis, but the occurrence of markers for these death pathways already indicates an irreversible process. Extreme electrical stimulation can also rupture RGCs’ membrane, so small soluble fluorescent molecules may also be used to reveal the damage; but since the RGC somas are sheathed in the endfeet of Müller cells and lie underneath the nerve fiber layer, these fluorescent molecules may not access RGC somas easily. Extreme electrical stimulation can also compromise RGCs’ ability to fire action potential due to refractory period and calcium toxicity, so it is plausible to closely monitor RGCs’ evoked response to increased stimulus intensity; as soon as the evoked response show sign of compromise, it is desirable to adjust the stimulus intensity.

The limited spatial resolution of electrical stimulation and its possible solution

The electrodes of epi-retinal implants do not directly contact RGCs. In a best-case scenario, they directly contact the nerve fiber layer, which mainly consists of RGCs’ axons (Figure 2). Axons are easy to be activated and generate action potentials as well, and considering they directly contact the epi-retinal electrodes, they are no less difficult to be activated than RGCs’ somas. Since these axons stretch across the whole retina, activating axons proximal to electrodes can activate RGC somas distal to electrodes, thus generated an “arc” shape of activated retina area. In the work done by James Weiland’s lab (5), such “arc” shape of activated retina area can be clearly seen via calcium imaging, especially when short stimulus (<10 ms) were used. But when the researchers extended the stimulus duration, the activated area gradually shrank, reaching a minimum at 25ms stimulus pulse width.

However, how the extension of stimulation will affect the risk of damaging retina is not known. Each RGC has its own threshold, and the maximum intensity it can withstand (the safety limit). The operating window of epi-retinal electrodes is determined by the overlapping of difference between the safety limit and threshold of each RGC. Clearly for a fixed stimulus intensity [usually less than 0.35 mC/cm2 (4)], elongation of stimulus needs compensation by reduction of the stimulus amplitude, thereby the safety limit of stimulus amplitude that RGCs can withstand will be lower under long stimulation condition; on the other hand, the threshold amplitude of RGC activation by long stimulation will also be reduced. However, the strength-duration curve of RGC threshold shows that stimulus duration beyond 500 μs hardly affected stimulus threshold amplitude (6). Therefore, it is reasoned that the operating window for long stimulation will be reduced, and the risk of damaging retina will be increased if the electrodes try to activate as many RGCs as possible, which was demonstrated in our data (Lu and Qin et al., unpublished data).

Other methods are developed to improve the spatial resolution of retinal prothesis electrodes. Comparing to epi-retinal implant, subretinal implant can be largely spared from the interference of nerve fiber layer. But it has its own limits, including disruption of the nutrition from choroid to retina, heat accumulation, and distortion caused by remodeling secondary retinal neurons. With the development of nanomaterial and compliant circuitry, both epi-retinal and subretinal implants can be improved regarding safety and stimulation efficiency. Recently, a novel protocol for specific stimulating deep structures of the mouse brain was described (7), simply by superimposing two interfering electrical fields emitted from two cutaneous electrodes. This stimulation protocol can be applied in the retinal prosthesis design, so that the superficial nerve fiber can be bypassed and only the deeper retinal ganglion cell soma layer or bipolar cells be stimulated. Also, the restraint posed by retinal nerve fibers may also be relieved by the assistance of biotechnology such as gene therapy, as discussed below.

Retinal prosthesis in combination with biotechnology

For example, the limited spatial resolution of stimulation for retinal prosthesis implants can be ascribed to the non-significant difference between excitability of RGC somas and RGCs distal axons. We know that action potential is initiated at the axon initial segment of neurons, which is very close to the soma, so if we can further lower the activation threshold of the axon initial segment, we can use low intensity stimulus to specifically stimulate the proximal part of RGCs, thus avoiding activating distal axon bundles, and improving the spatial resolution of stimulation. Protein tools for such operation have already been developed (8,9).

Besides the limited spatial resolution of electrical stimulation, another major hurdle the retinal prosthesis must face is the incompetence to selectively activate the ON or OFF visual pathways. These pathways encode the information when and how much the environmental luminance increases or decreases. Clearly when ON and OFF visual pathways are simultaneously activated, the brain will receive conflicting luminance information, but this is what current retinal prosthesis is doing. The ON and OFF visual pathway are represented by ON RGCs, OFF RGCs and ON-OFF RGCs in the retina, so in order to relay the unambiguous luminance information to the brain, it comes down to that retinal prosthesis must selectively activate ON RGCs, OFF RGCs or ON-OFF RGCs. Simply modulated the intensity of stimulus may not be the solution, since there is no consistent difference among the threshold of the three types of RGCs. Recently researchers have successfully separated the evoked response of one type of ON RGCs from its OFF counterpart via high frequency stimulation (10,11). The high frequency used by most researchers is above 5 kHz and may raise the risk of heating accumulation, especially in the actual clinical application, where the space for heat dissipation is very limited. Also, the intensified background firing of RGCs induced by high frequency stimulation may posed a new calcium toxicity problem.

With the development of genetic engineering and omics study, the transcriptomes of various types of RGCs came to known and their difference is under intensive characterization (12). We have the hope that specific promoters for specific type of RGCs—including ON RGCs, OFF RGCs, and ON-OFF RGCs can be found, and be used to driven tool proteins in these different types of RGCs. Also, protein tools for modulating excitability of neuron activation have already been developed (8). Therefore, it is conceivable to use RGC subtype-specific promoter and protein tools to specifically lower the threshold of ON RGCs, OFF RGCs or ON-OFF RGCs, and selectively activate the target RGC subtype via low intensity stimulus.

Though facing multiple challenges, and competition from other treatment strategies for blindness such as optogenetics, stem cell transplantation and gene therapy, so far retinal prosthesis still provides the most advanced outcomes regarding visual function recovery. The field of RGC stimulation research is rapidly progressing. However, to fully realize its designing purpose of restoring visual function for the blind, the retinal prothesis research should embrace achievements from multiple disciplines such as electronics, material science, and biotechnology. It is likely that a hybrid design of retinal prosthesis implant integrating biological components will be been in future.

As mentioned above, two major biological challenges the retinal prosthesis must handle—the limited spatial resolution of stimulation, and simultaneous activation of the ON and OFF visual pathway—still haunt this research field. Their solutions will largely depend on how closely engineers, medical professionals, biologists, industry and patients can collaborate. This is just the direction the retinal prosthesis research field is advancing.

Conflicts of Interest: All authors have completed the ICMJE uniform disclosure form (available at http://dx.doi.org/10.21037/aes.2019.12.01). The authors have no conflicts of interest to declare.