Posner-Schlossman syndrome (PSS), described in 1948, is a self-limiting and benign condition with unknown etiology (1-3). PSS affects patients between 20 and 50 years of age, although it can also be seen in children (4). The anterior chamber inflammation is usually mild, with few cells and minimal flare. Keratic precipitates (KPs) are always present. Posterior synechiae are never present. The attacks usually resolve by 2 to 3 weeks, sometimes spontaneously, and are recurrent. In between attacks, the eyes are normal, although a few eyes continue to have 1 or 2 small nonpigmented KPs.

PSS may resolve spontaneously within days to weeks after onset, but anti-glaucomatous and anti-inflammatory treatment is still indicated to control intraocular pressure (IOP) and inflammation for better prognosis. Some studies have shown an association of primary open-angle glaucoma and PSS (5-7), and glaucomatous damage from PSS itself has been noted (8,9).

In this retrospective study, we reviewed our 10-year experience with PSS alone, without co-existing primary open-angle glaucoma, to give a picture of the prognosis and possible risk factors.

We investigated 74 eyes for 72 patients (41 men; both eyes for 2 female) with a diagnosis of PSS at the Affiliated Hospital of Qingdao University between July 2005 and July 2015.

The diagnostic criteria for PSS were as follows (8):

Every case exhibited at least 2 documented PSS attacks and was observed for more than 6 months.

This study using clinical data including visual acuity testing, IOP measurement and perimetry was approved by the Affiliated Hospital Institutional Review Board of Qingdao University (No. 2005-017).

Each case was examined every 3 to 7 days during attacks and every 2 to 6 months between attacks. Data were collected on age, disease duration, number of attacks, duration of each attack and interval between attacks, as well as comorbidities. IOP during attacks, between attacks and after surgery was measured by Goldmann applanation tonometry. Follow-up included observations of conjunctiva injection, cornea edema, KPs, aqueous cells and flare, iris, pupil, and gonioscopy results. The optic discs were evaluated with use of a slit lamp with a 90-diopter lens. An optic disc was considered abnormal with localized optic disc notching, rim thinning or retinal nerve fiber layer defect. Visual-field examination involved use of automated computerized perimetry (octopus 900). The criteria for visual field deterioration (10): (I) one or more scotomas with a minimum width of 5; (II) a horizontal nasal step with one isopter of at least 10; (III) presence of a sector shaped defect; (IV) three contiguous locations depressed by at least 0.5 log units (5 dB) on any static profile.

Ten patients (12 eyes) with uncontrolled IOP, progressive cupping and visual field loss underwent trabeculectomy. Because these patients were relatively young and had inflammatory glaucoma, 0.3 mg/mL mitomycin C (MMC) was used during surgery. Surgery was performed with patients under peribulbar anesthesia. A half-thickness, 4 × 4 mm, rectangular scleral flap was created underneath a limbal-based conjunctival flap and Tenon’s capsule. The newly exposed scleral bed was cauterized and covered with a 4 × 4 mm sponge soaked in MMC (0.3 mg/mL) for 3 min and irrigated with 250 mL normal saline. A 1.5 × 2.0 mm window was created on the scleral bed. After surgical peripheral iridectomy, the scleral flap was sutured with 4 × 10-0 nylon interrupted sutures, and the conjunctiva and Tenon’s layer were closed with continuous stratified sutures (10-0 nylon sutures, Alcon). Postoperative topical steroids and antibiotic drops were given for 1 month.

Age of the patient at onset of 74 eyes

All 74 eyes had elevated IOP during attacks: mean 43.1 mmHg (range, 25–60 mmHg). The majority of mean peak IOPs during PSS attacks were higher than 30 mmHg, especially between 40 and 50 mmHg.

Twelve eyes (16.22%; both eyes for 2 female) had glaucomatous damage because of repeated PSS attacks and high IOP that could not be controlled by medication. These eyes had uncontrolled IOP, progressive cupping and visual-field loss, so they underwent trabeculectomy. The mean postoperative follow-up was 18 months (range, 12–38 months). In the year before surgery, the 12 eyes had experienced 2 to 4 attacks each, but in the year after surgery, all eyes had no PSS attacks.

Twelve eyes (16.22%) demonstrated glaucomatous cupping. The duration of PSS in each eye was more than 3 years.

A 42-year-old Chinese woman presented slightly blurred vision in both eyes in August 2005. The IOP was 56 mmHg in the right eye and 47 mmHg in the left. The patient was in good health. On slit-lamp examination, mild conjunctival injection, mild corneal edema, two white KPs, and a small number of cells were noted in the anterior chamber. Both pupils were dilated, with sluggish reaction to light and no peripheral anterior synechiae. Gonioscopy revealed wide open angles for both eyes. Ratios of cup to disc were 0.3 for both eyes. Visual fields were normal on Octopus Automatic perimetry. Systemic examination was normal, and the patient was not using any topical or systemic steroids. The treatment for both eyes was prednisolone, 1%, 1 drop 4 times a day, and timolol, 0.5%, 1 drop twice a day. One week later, IOP had decreased to 16 mmHg in the right eye and 17 mmHg in the left. Timolol was discontinued and steroid treatment was tapered. Topical steroids were discontinued when the anterior chamber activity decreased. The patient experienced PSS attacks in both eyes in February and August 2006, March and November 2007, and July 2008. Each time, the treatment was topical corticosteroids (fluorometholone or dexamethasone), topical timolol, or oral methazolamide. Each attack lasted 2 to 5 weeks, IOP could be controlled, and morphologic features of the optic disc showed no change. In September 2008, the patient had another attack. After 4 weeks, topical steroid treatment was stopped when the anterior chamber activity subsided. However the IOP continued to be >30 mmHg in both eyes; treatment was topical timolol. The addition of latanoprost did not change the IOP. The optic disc cupping progressed in both eyes (Figure 1A,B, 0.7 for the right eye and 0.6 for the left) and Bjerrum-area field defects developed in both eyes (Figure 2A,B). Trabeculectomy was decided because the IOP remained high on maximal medical treatment. 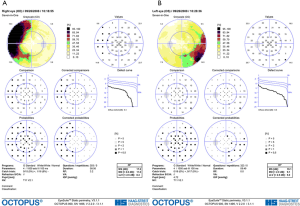 The patient, under local anesthesia, underwent successive bilateral trabeculectomy. Postoperatively, the IOP was normal without any drug treatment. Follow-up was initially once or twice a week, then 2 to 4 months, then at 6-month intervals. The IOP remained normal without any medication for more than 20 months after surgery, with no PSS attacks.

We aimed to describe our clinical experience with PSS in terms of morbidity and prognosis. Our 72 patients were, on average, middle-aged (40±6 years; range, 16–64 years), but one 16-year-old boy had PSS. Of our 72 patients (74 eyes), medical treatment was efficacious for 62 (62 eyes). Ten patients (12 eyes) exhibited progressive cupping and visual-field loss, but trabeculectomy and anti-metabolite treatment resulted in normal IOP and no recurrence of PSS. Although the prognosis of most PSS is usually benign, the IOP and optic nerve disc must be monitored. Visual-field damage can occur with long-term disease and involvement of both eyes.

PSS is usually unilateral, but bilateral cases have been reported (11-13). Among our 74 eyes, bilateral disease was seen in 2 patients, and both eyes of every case had glaucomatous damage. Previous reports described binocularly involved cases with a higher prevalence of visual damage than monocularly involved cases (12,13). Further study is required to compare pathological mechanisms between monocularly and binocular cases of PSS.

In our follow-up of PSS patients, for most of our patients, the prognosis was benign. Glaucoma damage developed in only 12 eyes (16.22%). In our study, we could not find the relationship between the mean peak IOP and glaucomatous damage. But long-term disease was probably due to visual field defect. The field defect and optic nerve-head cupping were related to the crises. Because we could not find field defects or glaucomatous cupping at the initial presentation, the visual function might have been affected by the crises themselves. However, the residual effect of steroid-related IOP elevation cannot be completely ruled out, even though one of our patients had not been using a topical steroid for more than 6 weeks. We did not observe steroid-reduced cataract. So after anterior inflammation was controlled, topical steroids discontinued, and IOP was monitored. Maximal medical treatment failed to control the IOP in these 10 patients. Trabeculectomy had to be performed to reduce the IOP and stop the disc cupping progression. These 10 patients seemed to have received additional benefit in remission of the uveitic process.

Jap et al. in their retrospective review of 50 patients (53 eyes) with PSS, found glaucoma in 14 eyes (26.4%) as a result of repeated PSS attacks (8). The mean disease duration in their study was 7 years, which was more than the 4.3 years in our study, so the different incidence of glaucomatous damage between the 2 studies may have been due to the length of PSS. Filtering surgery was performed in 9 (17%) eyes in the Jap et al. study, with no attacks in 6 eyes in the year after surgery. The latest report, by Zhong et al. describes 8 eyes that underwent trabeculectomy, with no attacks in the 30-month follow-up (14). Our experience with 10 patients also suggests that trabeculectomy may control the IOP and prevent future recurrences. Starou and Murray found that trabeculectomy might actually reduce the severity and recurrence rate of uveitis (15). The improved aqueous outflow may actually help the egression of inflammatory mediators, but further study is needed.

As an aside, we noted that well-educated patients often could sense impending attacks by their symptoms and institute self-therapy with an aqueous suppressant and topical nonsteroidal anti-inflammatory drug to limit the elevated IOP associated with treatment delays.

The etiology of PSS remains still unknown. There have been numerous postulations for the pathogenesis of PSS including autonomic deregulation and infections. Herpes simplex or cytomegalovirus (CMV) has been suggested as etiologies for PSS due to their high express in the aqueous humor during acute attacks (16,17). And some researchers considered that these results may have a potentially significant impact on the management of PSS (18). However, the role of anti-CMV therapy in eyes with CMV PSS remains unresolved, such as potential toxicity and cost of antiviral therapy. In our following study, we will pay more attention to the relationship between clinical manifestation and laboratory findings.

In this study, we reviewed PSS without co-existing primary open-angle glaucoma, to give a picture of the prognosis. And we analyzed possible risk factors. The cases with glaucomatous damage were intervened with trabeculectomy, complied with good outcome. In brief, our experience with PSS showed it to be the typical self-limiting and benign condition. However, glaucomatous damage may develop with long-term disease, especially with bilateral disease. Therefore, patients with PSS must have regular evaluation of visual acuity, visual fields and IOP.

Conflicts of Interest: All authors have completed the ICMJE uniform disclosure form (available at http://dx.doi.org/10.21037/aes.2017.05.02). The authors have no conflicts of interest to declare.

Ethical Statement: The authors are accountable for all aspects of the work in ensuring that questions related to the accuracy or integrity of any part of the work are appropriately investigated and resolved. The study was conducted in accordance with the Declaration of Helsinki (as revised in 2013). Informed consent was waived due to the retrospective nature of the study. The study was approved by the Research Ethics Committee of Affiliated Hospital of Qingdao University (No. 2005-017).