Selective laser trabeculoplasty (SLT) was developed in 1997 by Latina et al. (1), to treat open-angle glaucoma (OAG), and was then approved by FDA in 2001; its clinical efficacy to lower intraocular pressure (IOP) in OAG has been universally adopted.

The exact mechanism is yet to be fully understood; yet some evidence suggests that SLT-induced inflammation increases permeability of the Schlemm’s canal endothelial cells (2-4). The effect, after successful SLT, diminishes with time, and patients often require additional intervention, to maintain target IOP. Also, a significant number of patients do not respond well to initial SLT treatment. Thus, SLT repeatability has assumed tremendous importance in recent years.

SLT has been adopted by clinicians, even as a first-line treatment, for its enduring IOP-lowering efficacy (5-7). If repeated SLT can ensure consistent optimal effect, several patients with OAG or ocular hypertension (OHT) may opt for conventional eye drops as a secondary treatment choice, which, in turn, will circumvent side effects, and patient compliance issues, while reducing health care costs.

Recent articles only briefly reference SLT repeatability (8-10), therefore, in this study, we systemically review previously conducted analyses on the same; the aim being to summarize clinical evidence, so as to support and improve our daily practice. 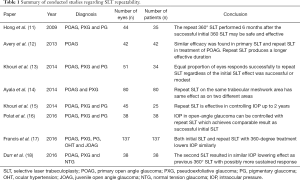 Hong et al. (11) published the first article regarding SLT repeatability in 2009, which reviewed 44 eyes of 35 patients, with successful initial 360° SLT1, and a 360° SLT2 was performed at least 6 months later, due to lost of efficacy. Diagnoses included primary open-angle glaucoma (POAG), pseudoexfoliative glaucoma (PXG) and pigmentary glaucoma (PG). Success was defined as ≥20% IOP reduction, as compared to pretreatment baseline IOP. The study revealed, both SLT1 and SLT2 presented no significant variance in success rate and IOP-lowering effect, with the exception of IOP lowering further at 1–3 months after SLT1, than with SLT2. There was no significant efficacy variance if SLT2 was given 6 months after initial SLT1.

Avery et al. (12) studied 42 eyes of 42 patients with only POAG, in 2013. SLT was performed with 40–50 shots over 360°. Success of treatment was defined by a minimum 20% reduction in pretreatment IOP, or a post-treatment IOP at or below target IOP. The results found no significant statistical difference between SLT1 or SLT2, in terms of mean IOP reduction, success rate, or duration of success, yet the treatment success duration after repeat SLT was longer than with primary SLT. During the study, 9 eyes were treated with a third SLT that also showed seemingly comparable success (56%) rate, and mean IOP reduction at 4 weeks (18.9%) and at 4 months (17.7%). SLT3 results were however not included in this analysis. The authors disagree with the idea that repeat SLT has lesser chance of efficacy when performed within a short time, after failed initial SLT.

Khouri et al. (13) proved Avery’s perspective that a similar proportion of eyes responded successfully to repeat SLT, regardless of a successful or modest response to initial SLT.

Ayala et al. (14) evaluated the IOP-lowering effect of repeat SLT on either the same 180° as initial SLT, or on the opposite 180°, and the results were not significantly different. This study, based on a prospective randomized clinical trial, reviewed a group of 80 eyes from 80 patients, with diagnoses including POAG and PXG.

Khouri et al. (15) in 2014 published the first peer reviewed study on the long term efficacy of repeat SLT, on a cohort of 25 subjects. Forty-five eyes were treated with Initial SLT and repeat SLT 360°, with mean energy levels of 0.94±0.05 and 1.08±0.23 mJ, and a mean total number of 111±8 and 104±7 spots respectively. Repeat SLT efficacy, realized on subjects with POAG, PXG or PG, could last up to 24 months, with variations in IOP similar to initial treatment, except at 4, 8 and 12 months, wherein initial SLT caused significantly greater reduction of IOP. At 24 months, 29% and 39% of eyes retained IOP reduction >20% and ≥15% respectively.

Francis et al. (17) published their clinical study in 2016, which retrospectively reviewed the success of repeat SLT 360° on a considerably larger cohort of 137 subjects. The authors established similar results that proved SLT was successful in both initial and repeat treatment of OAG.

The OAG treatment algorithm has been updated and altered in the recent years. To achieve good control of OAG, whilst avoiding polypharmacy, and difficult or non-compliance, new surgical techniques that include argon laser trabeculoplasty (ALT), SLT and minimally invasive glaucoma surgery have been critically reviewed.

SLT has been widely employed, and even suggested as first line treatment for OAG and OHT, since 360° SLT and Latanoprost efficacy is comparable, over a 12 month period, and the diurnal variation or fluctuation can also be significantly reduced (19-21). The newly published study on Lancet from UK supports this adoption in clinical practice. The authors conclude SLT should be offered as a first-line treatment for OAG and OHT, based on their three-year study (22).

The goal of this review is to summarize the clinical evidence of repeat SLT efficacy. The aforementioned studies have proven corresponding efficacy of repeat SLT on 360°, with success being defined as ≥20% IOP reduction mostly, which, in practice, should be objectively defined, since many other factors justify target IOP. Clinicians could repeat SLT alongside other adjunctive treatments, in order to achieve greater IOP reduction; or perform repeat SLT with 180° or less, to achieve sufficient target IOP reduction. The initial SLT energy setting can also be adjusted, based on the objective pigment level in the trabecular meshwork. However, the recommended energy setting to be achieved is 0.1 mJ less than threshold levels that cause bubble formation (23,24). Several clinicians choose to perform SLT on 180°, either superiorly/inferiorly or nasally/temporally and tend to recommend using less energy, but increasing application spots, to avoid inflammation and scarring. The optimal setting for SLT is still uncertain, nevertheless, the repeat SLT efficacy on 360°, should also apply on 180°, or even 90°; although treatment augmentation may still be necessary to achieve therapeutic threshold.

With regard to post-treatment complications, a comparable rate was observed in both repeat SLT and initial SLT. Most reported side effects, including discomfort, redness and IOP elevation, were mild and transient. As for the management of patient, there was no significant difference between repeat SLT and initial SLT. Of note, the changes of IOP should be monitored approximately one hour after performed repeat SLT to rule out a temporary IOP spike.

In spite of the fact that SLT repeatability has been addressed via aforementioned studies, the matter remains controversial, and requires further corroborations. Moreover, maximal SLT repeatability, and its impact on filtration surgery or other treatment methods, is yet to be resolved.

If primary SLT is unsuccessful, or its effects subside, repeat SLT, with comparable efficacy and low complication rates, should be encouraged.