Crystalline retinopathy is a collection of disorders characterized by the presence of reflective crystals located in the retina. Crystals are mainly distributed in the macula and posterior pole, however, they can also be observed in the middle and peripheral retina. Crystalline retinopathy has been described as part of the spectrum of retinal disorders including genetic, degenerative, toxic, iatrogenic and idiopathic conditions (1). As part of the comprehensive assessment of patients with this condition, multimodal imaging plays a crucial role in diagnosis, monitoring of disease progression, response to treatment, and understanding the underlying pathogenesis.

Fluorescein angiography (FA) and indocyanine green (ICG) angiography are conventional imaging modalities that provide imperfect visualization of retinal and choroidal blood flow. FA primarily shows the superficial vascular network of the retina and is inadequate for visualizing the deeper capillary layers and the choroid. ICG angiography does not allow for discrimination of the individual layers of the choroid: inner choroid (a complex of the choriocapillaris layer and Sattler’s layer) and outer choroid (Haller’s layer) (2).

BCD is an autosomal recessive retinal dystrophy caused by CYP4V2 mutations and is characterized by the presence of yellow-white intraretinal crystals localized in the posterior pole and outer cornea, atrophy of the retinal pigment epithelium (RPE) layer and sclerosis of the choroidal vasculature. Swept-source optical coherence tomography (SS-OCT) in patients with BCD illustrates hyperreflective retinal deposits in all retinal layers mainly in RPE/Bruch membrane complex, disruption of the interdigitation and ellipsoid zone of the retina, tubulations in the outer nuclear layer, and in the advanced stage patchy loss of the outer retina and RPE (Figures 1,2) (1,4,5).

Miyata et al. performed a prospective study that included 13 patients (13 eyes) with BCD in which a flow deficit was identified in the choriocapillaris in 92% of eyes (12 eyes) using OCTA (RTVue XR, Avanti with AngioVue, Optovue, Freemont, California, USA) (Figure 3). The presence of residual subfoveal choriocapillaris was significantly associated with visual function. Analysis of en face OCTA images were used to evaluate choroidal blood flow in Sattler’s and Haller’s layer. Because of the absence of the choriocapillaris and Sattler’s layers in most patients with BCD shown by previous SS-OCT based reports (7), choroidal blood flow depicted in OCTA was found mainly in Haller’s layer (6).

A similar result was described by Ipek et al. in a case report of a 25-year-old patient with the diagnosis of BCD after 10 years of disease progression. With the use of OCTA (Topcon DRI OCT Triton, Topcon, Japan), the group identified a significant decrease in choriocapillaris flow. Vessels belonging to the deeper choroidal layers were apparent in the choriocapillaris area (8).

Talc retinopathy develops after the chronic use of unfiltered suspensions of crushed oral tablets intravenously. Methylphenidate HCL is one of the drugs most frequently reported. Ocular findings may range from asymptomatic crystalline retinopathy with intravascular crystals (Figure 4) to retinal capillary non-perfusion and neovascularization secondary to retinal ischemia (1). 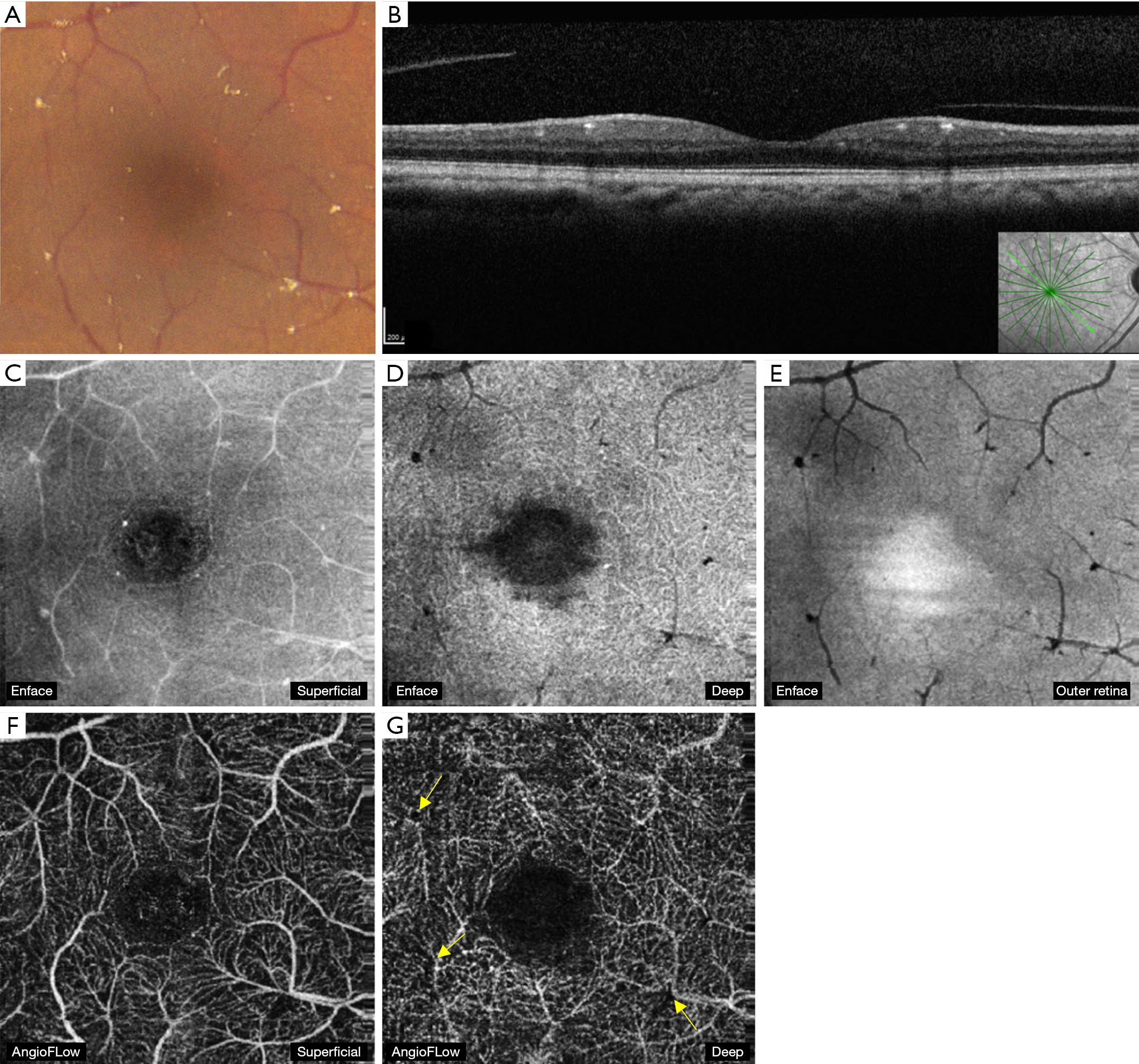 Bagheri et al. were the first to describe the findings of talc crystalline retinopathy on OCTA (Optovue Inc., Fremont, CA, USA) (Figure 4) in a 60-year-old African-American man with a history of intravenous drug use. The talc deposits were detected on en face OCT imaging as hyperreflective punctate spots inside the perifoveal arterioles at the level of the superficial vascular network. On en face OCT of the deep vascular network and outer retina, these areas were visualized as hyporeflective spots due to the shadowing caused by overlying talc particles. The same description was reported at the level of deep capillary plexus in OCTA. No disruption of blood flow and normal outer retina were shown in OCTA. Based on imaging findings, the authors postulated that the talc particles were distributed along only the superficial vasculature because they were too large for the finer caliber vessels of the deep capillary network (9).

MacTel2 is an acquired, slowly progressive condition that affects middle-aged and elderly individuals. It is characterized by bilateral retinal capillary ectasia that affects all microvascular layers of the central macula, with crystalline deposits near the telangiectasias found in about half of the eyes. These highly reflective and white-yellow crystals are distributed in an annular pattern with central foveal sparing. Foveal atrophy and cystic foveal cavitation can be present on spectral-domain optical coherence tomography (SD-OCT) (Figure 5). Loss of outer retinal structure can progress to macular atrophy and/or subretinal neovascularization (SRNV) (Figure 6) (1,3). 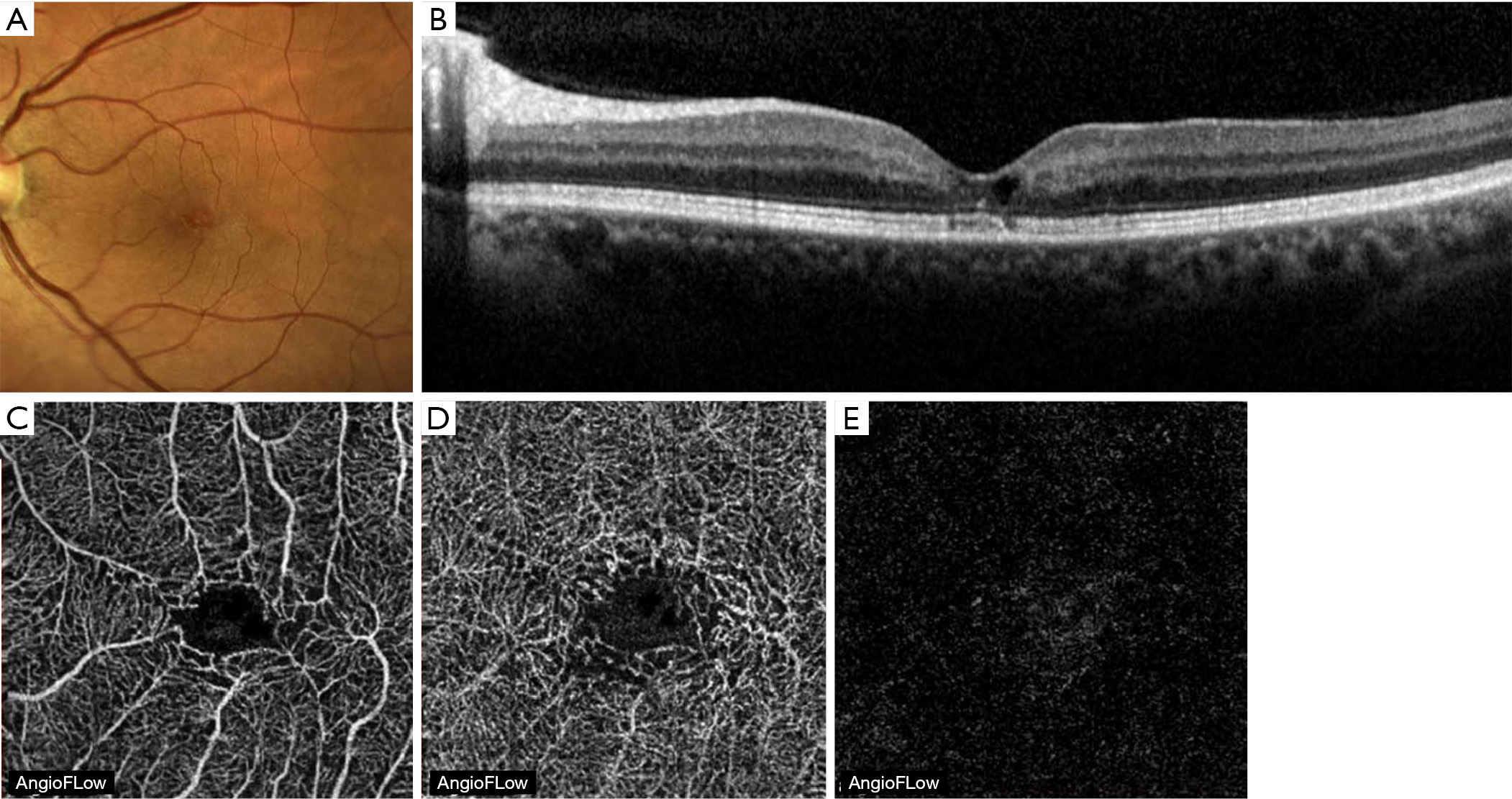 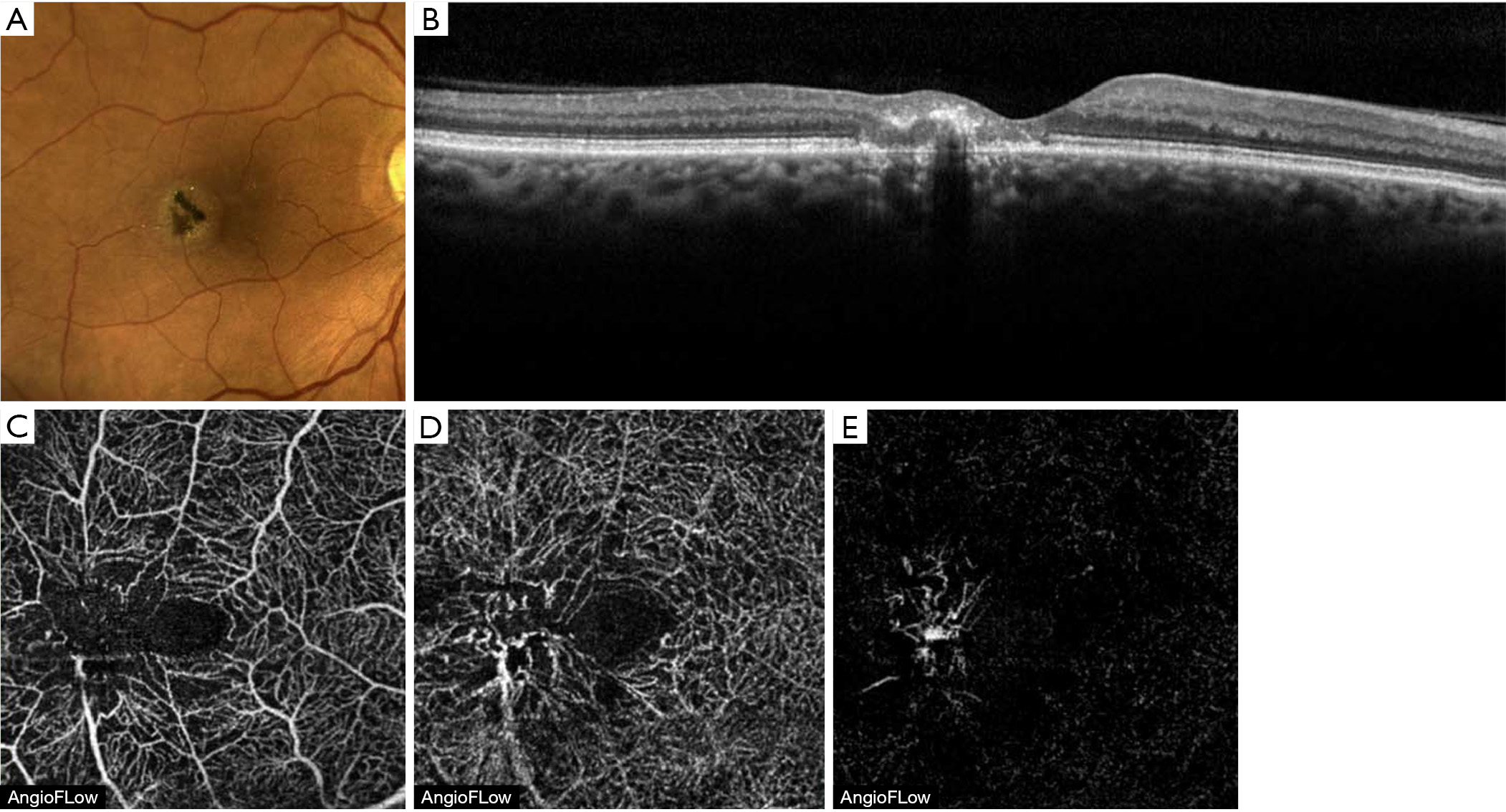 In early non-proliferative MacTel2, OCTA demonstrates dilated vessels in the deep retinal capillary plexus in the temporal juxtafoveal region. Microvascular abnormalities extend circumferentially around the fovea and into the superficial capillary plexus with disease progression (Figure 5). In late proliferative or neovascular MacTel2, OCTA shows significant alterations in the juxtafoveal capillary network with prominent anastomoses that extend to the outer retina, forming a subretinal fibrovascular plaque originating from the deep capillary plexus (Figure 6). The neovascular complex communicates with both retinal and choroidal circulation. SRNV can be obscured by temporal macular leakage on FA, which is a hallmark finding of the non-proliferative stage, meaning that OCTA is a more sensitive imaging modality for identification of SRNV relative to FA (1,3,11,12).

The vascular changes of MacTel2 were evaluated in 6 patients (10 eyes) by Nalci et al. using OCTA (Optovue Inc., Fremont, CA, USA). The patients were classified according to the MacTel OCTA grading system proposed by Chen et al. (13. They observed that the superficial vascular network of some patients was remarkably well preserved, even in advanced disease with neovascularization in the deep layer; and pronounced changes were evident in the deep capillary network even in early disease stages. The vascular abnormalities described in the series include reduced vascular density, increase in the space between vessels, and telangiectasias in the superficial and deep vascular network. Vascular invasion and irregularity of the foveal avascular zone, right angle venules, and neovascularization in the outer retinal layer were other reported findings (14).

Toto et al. described telangiectasias in the deep and superficial vasculature, more severe in the deep plexus, and reported a more widespread reduction in vessel density in the superficial and deep plexus in the foveal region and in the parafoveal superficial plexus. The presence of right-angle vessels was notable in eyes with pigment deposits, and neovascular proliferation was detected in a lower percent of eyes (20%) compared to other studies. The topographic sequence of pathological findings started from the foveal temporal edge progressing to the nasal fovea, and in more advanced stages the perifoveal region was completely involved. In this study, the authors reported that OCTA was more sensitive at demonstrating vessel density, the level of involvement of each individual retinal vascular plexus, and retinal neovascularization compared with FA (10).

OCT angiography has demonstrated novel microvascular abnormalities in MacTel2, and together with recent insights regarding retinal structural abnormalities and Muller cell dysfunction, major advancements have been made in our understanding of this neurovascular condition (12,14).

Tamoxifen citrate is commonly used as adjuvant endocrine therapy for the treatment of breast cancer. In addition to its antiestrogenic effect, retinal toxicity has been reported as a side effect manifesting as a crystalline retinopathy. In addition to, highly refractile foveal crystal deposits, cystic macular edema and foveal cavitation have been described. Similar morphologic features to those found in MacTel2 can be observed on SD-OCT including hyperreflective intraretinal deposits mainly in the inner retina, hyporeflective cavities, and photoreceptor disruption (Figure 7) (1,15). 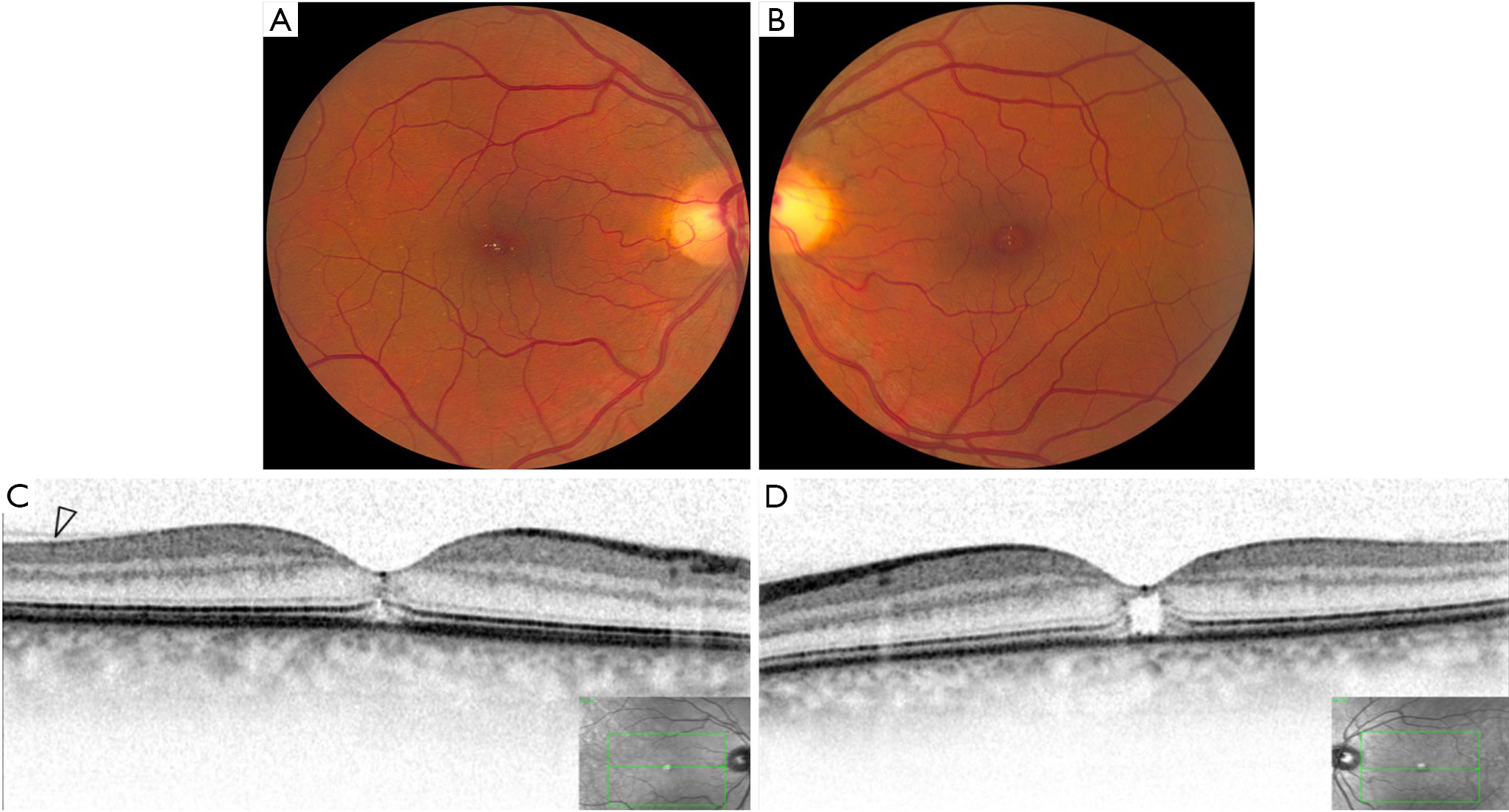 Figure 7 Tamoxifen retinopathy. Fundus photo of the right (A) and left eye (B), demonstrates refractile deposits in the macula. (A) Tiny drusen-like deposits are also noted in the retinal periphery in the right eye. Spectral-domain optical coherence tomography of the right eye (C) reveals a disruption of the ellipsoid zone and in the left eye (D) a defect in the outer retinal layers. The arrowhead (C) shows the attached posterior hyaloid. Images from Caramoy A, Sholz P, Fauser S, Kirchhof B. Imaging tamoxifen using spectral-domain optical coherence tomography (15).

In seventeen eyes with tamoxifen retinopathy studied by Lee et al., OCTA imaging (AngioVue, Optovue, Fremont, CA, USA) showed saccular capillary telangiectasias in the deep vascular plexus of the temporal juxtafoveal area (Figure 8), right-angled venules (by matching FA and OCTA imaging) in the deep capillary plexus (Figure 9), and a decrease in the vessel density in the superficial capillary plexus. The absence of telangiectasias at the deep capillary network was interpreted as a mild form of retinopathy. Subretinal neovascular proliferation was not detected in any of the eyes (16).

SLS is a rare autosomal recessive neurocutaneous disorder characterized by crystalline maculopathy, congenital ichthyosis, spasticity, and intellectual disability. SLS is caused by bi-allelic mutations in ALDH3A2 gene, which leads to a deficiency of fatty aldehyde dehydrogenase (FALDH), an enzyme involved in the metabolism of aldehydes and alcohols. Retinal abnormalities are the result of the potentially toxic effect of accumulation of fatty aldehydes and/or alcohols in the retina.

SLS maculopathy is characterized by intraretinal glistening yellow-white crystals mostly located in the parafoveal area, and in the late-stage, atrophic changes of the RPE and lipofuscin deposits. SD-OCT most commonly localizes macular crystals to the inner nuclear and outer plexiform layers, and less often to the ganglion cell and inner plexiform layers. Other findings demonstrated by SD-OCT include cystic foveal cavitation associated with foveal atrophy, ellipsoid zone disruption, and subretinal deposits likely consisting of lipofuscin pigment (Figure 10) (1,18). 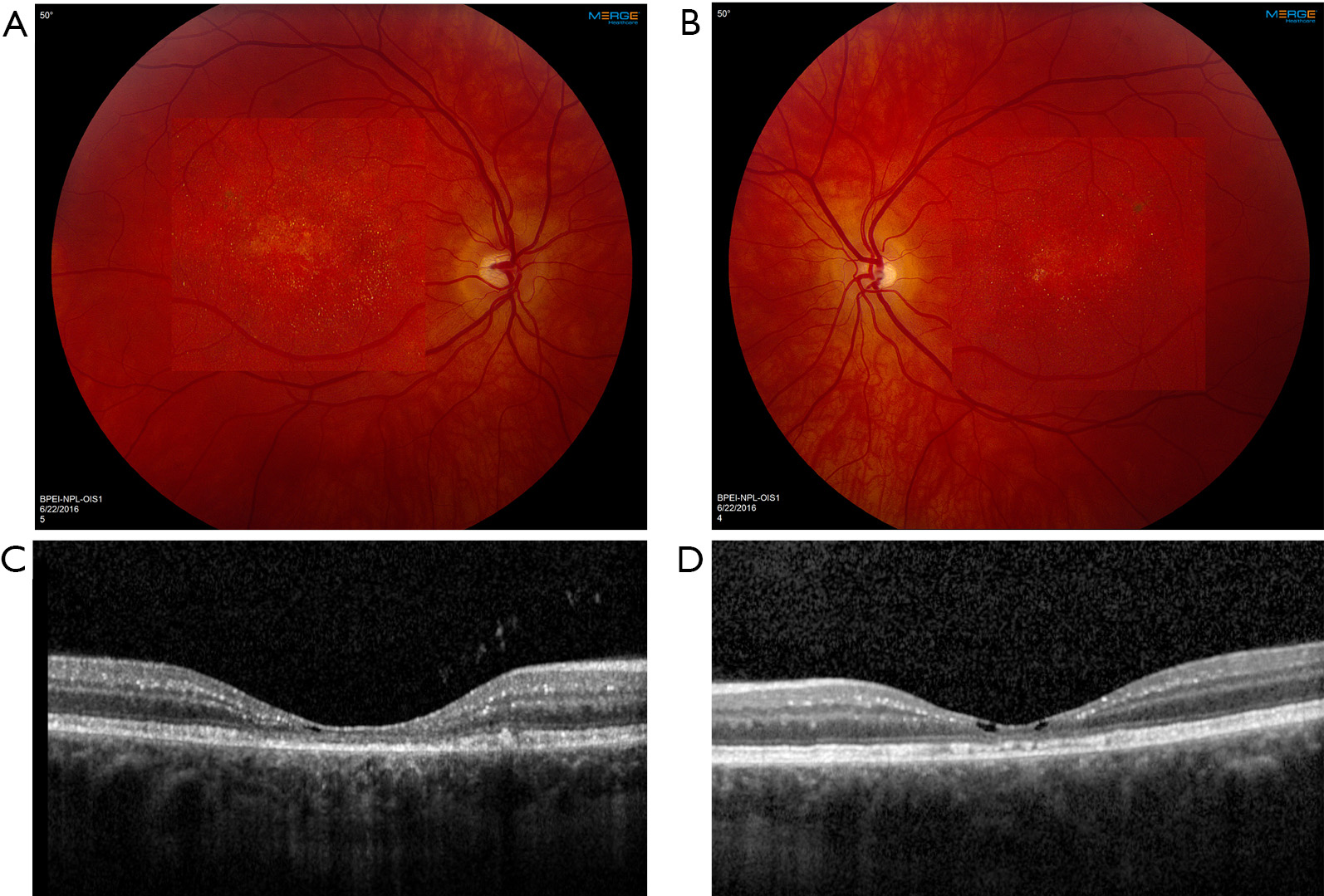 The first report of the OCTA (AngioPlex; Carl Zeiss Meditec, Dublin, CA, USA) findings in this condition was documented in three siblings with late-stage SLS maculopathy. OCTA imaging revealed a decreased capillary density, prominent vessel dilation, and increased flow voids in the superficial and deep capillary plexuses (Figure 11) (19). These changes are similar to those found in MacTel2 and tamoxifen retinopathy, which points to a likely common etiology of Muller cell dysfunction.

Crystalline retinopathies are a collection of rare disorders that demonstrate variable patterns of retinal crystal deposition. OCTA imaging has revealed novel vascular abnormalities that can augment our understanding of the pathogenesis of these neurovascular conditions with crystalline features. Furthermore, OCTA can be instrumental in diagnosis confirmation, disease progression monitoring, and assessment of treatment response. Larger series could provide greater insights into the pathogenesis of this diverse and potentially debilitating class of diseases.

Conflicts of Interest: The authors have completed the ICMJE uniform disclosure form (available at http://dx.doi.org/10.21037/aes-20-89). The series “Retinal Imaging and Diagnostics” was commissioned by the editorial office without any funding or sponsorship. The authors have no other conflicts of interest to declare.