Altering the intestinal microbiota for therapeutic benefit in uveitis

Non-infectious uveitis is a group of heterogeneous disorders for which the etiologies have not been completely elucidated. These conditions seem to arise from a combination of genetic and environmental factors that are currently poorly characterized, but that have in common an imbalance resulting in an increased effector arm of the immune system relative to the regulatory arm of the immune system. Disruptions in both innate and adaptive immunity can result in ocular inflammation, as can aberrations in ocular immune privilege. Additionally, an immune reaction to as of yet unidentified infectious agents can result in what appears clinically like non-infectious uveitis. While the majority of therapeutics tested in recent clinical trials to treat non-infectious uveitis were either an ocular steroid formulation for a potent but nonspecific anti-inflammatory approach with potential ocular side effects, or a biologic treatment targeting the effector arm of the immune system, very little has been investigated which targets enhancing the regulatory arm of the immune system to potentiate immune homeostasis or regulating intestinal immunity to affect systemic immunity. Targeting the intestinal microbial changes associated with non-infectious uveitis has the potential to influence regulation of systemic immunity thus reestablishing immune homeostasis in the eye.

Intestinal microbiota in health and disease

A significant segment of the human immune system is housed in the gastrointestinal tract, which also is home to the majority of the human commensal microbiota (referring not just to commensal bacteria, but also commensal viruses, parasites, fungi, and archaea). The microorganisms that reside normally in the gastrointestinal tract were previously thought to be passive bystanders, but are now known to be active contributors to normal post-natal intestinal mucosal and systemic immune system development. In fact, the gut microbes are important in maintaining immune homeostasis in childhood and adulthood. Over the past decade, it has emerged that the gut microorganisms can influence both innate and adaptive immunity. A disruption in the intestinal microbial constituents, termed an intestinal dysbiosis, has thus been connected to the development of numerous inflammatory diseases including, but not limited to, ankylosing spondylitis (AS), atherosclerotic disease, rheumatoid arthritis (RA), type 1 diabetes, psychiatric, and CNS disorders (1-4).

These associations between immune-mediated disease and the commensal microbiota exist, in part, due to their influence on the differentiation of certain adaptive immune cell types. For example, some strains of bacteria (5,6) foster differentiation of T helper 17 cells (Th17), which can become pathogenic under certain conditions, and are found at inflamed tissue sites in diseases such as non-infectious uveitis or arthritis. Other commensal bacteria, on the other hand, can promote differentiation of regulatory T cells (Tregs) in the large intestine (7,8) which are thought to be protective against undue inflammation. Furthermore, short chain fatty acids (SCFAs), which are gut bacterial products of fermentation of dietary fiber, appear to promote Tregs as well, and were found in one study to reduce inflammatory colitis, and in another study, to reduce CNS inflammation in a mouse model of multiple sclerosis (MS) (9,10).

Several theories hypothesize how the gut microbiome causes inflammation at extraintestinal tissue sites such as the eye or joints: (I) the T-cell threshold model says that maladaptive immunodifferentiation with disproportionate numbers of potential effector immune cell types such as Th17 cells compared with immunoregulatory cell types such as Tregs can occur due to an imbalance in the abundance of gut microbial strains which promote one arm of the immune system over the other. This state decreases the threshold for T-cell activation by increasing the pool of Th17 cells that can traffic to other tissue sites from the GI tract, and can become pathogenic in certain local settings. (II) The molecular mimicry model is best explained as autoreactive T cell activation via cross-recognition of self-antigens with intestinal microbial antigens. (III) The leaky gut hypothesis is described by a scenario in which an intestinal dysbiosis results in disruption of intestinal barrier function leading to leakage of microbial components, microbial metabolites, or whole bacteria or other microorganisms into the systemic circulation, which then causes an aberrant immune response at an extraintestinal tissue site such as the eye.

Specific microbial changes have been described in several inflammatory diseases including AS, RA, and MS. For example, new onset RA patients who are treatment-naïve, have an increased relative abundance of Prevotella copri in their GI tract, but decreased Bacteroides species (4,11). P. copri was inversely correlated with the “shared-epitope” genes in RA which confer genetic risk. These results show that an intestinal dysbiosis favoring Prevotella is associated with disease development in non-genetic RA, which comprises the vast majority of RA (4). In MS, in which a subset of patients have anterior or intermediate uveitis and retinal vasculitis, there were reductions in Clostridia that usually foster Treg differentiation (3). Lending credence to the causative nature of this intestinal dysbiosis was data showing that fecal microbial transplants from MS patients into mice promoted worse CNS inflammation (12). In human HLA-B27 transgenic rats, we have demonstrated an increase in the relative abundance of Paraprevotella, a bacterial genus within the same family as Prevotella, as well as decreased Rikenellaceae (13) in the gut. Acute anterior uveitis occurs in approximately 30% of AS patients, of whom up to 90% are HLA-B27 positive. In AS patients, both Prevotellaceae and Lachnospiraceae bacteria are enhanced in the ileum compared to healthy control subjects (1).

Alterations in the intestinal microbiota in non-infectious uveitis

Multiple investigators have shown the significance of the intestinal microbiome in non-infectious uveitis. For instance, Nakamura and colleagues were among the first to show that an intestinal bacterial signature was associated with severe, compared to mild, intraocular inflammation phenotypes in a mouse model of inducible uveitis called experimental autoimmune uveitis (EAU) (14). This same group demonstrated that an increase in intestinal permeability takes place before peak intraocular inflammation occurs in this model (15). Horai et al. showed in their study utilizing a mouse model of uveitis that expresses a transgene for a retina-specific T cell receptor, that a bacterial antigen from the small intestines activated retina-specific T cells, thus giving credence to the molecular mimicry model of autoimmune uveitis (16). However, to date, the intestinal bacterial antigen mimic for the retinal peptide that promotes uveitis has not been found (17).

Huang and colleagues showed that in acute anterior uveitis patients there was an intestinal dysbiosis compared to control subjects, while Ye et al. revealed that transferring the fecal microbiota from patients with Behcet’s disease into mice worsened uveitic inflammation (18,19). In a more recent study, uveitis patients were found to be enriched in intestinal Prevotella and Streptococcus strains but depleted in other bacteria such as Lachnospiraceae and Bifidobacterium (20). Furthermore, Jayasudha and colleagues describe the results of a case control study of 14 idiopathic or Vogt-Koyanagi-Harada uveitis patients compared to healthy control subjects who had significant differences in intestinal fungal diversity, including enrichment in Malassezia restricta, Candida albicans, Candida glabrata, and Aspergillus gracilis in uveitis patients (21).

Therapeutic targeting of the intestinal microbiota

There are several methods that can potentially be utilized to treat uveitis by altering the gut microbiome. The oral antibiotics, metronidazole and vancomycin, substantially reduced the severity of uveitis in EAU via alterations in the gut microbiota which drove their relative abundances closer to the non-disease state. This phenomenon was accompanied by increased Tregs in the intestinal lamina propria and extraintestinal lymphoid tissues later in the course of disease (14). An independent group of investigators ultimately found comparable results using the oral antibiotics metronidazole and ciprofloxacin (22).

Another approach to target the microbiota is to administer intestinal bacterial metabolites, such as SCFAs, known to promote immune homeostatic immunodifferentiation. Our group found that exogenous administration of oral SCFAs decreased intraocular inflammation by upregulating Tregs in the large intestine and extraintestinal lymphoid tissues as well as by inhibiting migration of Th1 cells from the gut to the spleen (23). These studies imply that striving to reestablish immune homeostasis by promoting Treg differentiation can potentially be a valuable tool to treat uveitis, although other mechanisms influenced by the gut microbiome, such as intestinal permeability and gut-extraintestinal lymphoid tissue T cell trafficking can also be important targets. We have also found that diets rich in certain fermentable fibers that allow for increased endogenous intestinal bacterial production of SCFAs, can protect against uveitis by decreasing intestinal permeability and by increasing regulatory T cells in the gut (unpublished data, Nakamura et al.). Additionally, our group has demonstrated that immunosuppressive agents commonly used to treat uveitis patients, such as mycophenolate and methotrexate, when given orally, may likely partially exert its effect via beneficial changes in the intestinal microbiota as well (unpublished data, Llorens-Belles et al.).

Thus far, we have outlined several potential approaches in therapeutic intervention targeting the intestinal microbiota for treatment of uveitis, including antibiotics that reverse the intestinal dysbiosis associated with uveitis, bacterial metabolite SCFAs to block migration of effector T cells from the gut, and dietary changes that promote SCFA production that also decrease intestinal permeability (Figure 1). All have in common that they can increase Tregs in the intestinal tract and elsewhere in the body. Additional potential approaches might utilize the following strategies: live bacterial strains, or probiotics, given orally to stimulate immune homeostasis through Treg differentiation. The latter approach appears to have good potential as demonstrated in pre-clinical experiments (24,25); and finally, replacing a community of dysbiotic intestinal bacteria with a healthy community via fecal microbial transplantation. Fecal microbial transplantation was demonstrated to be curative in antibiotic-refractory Clostridium difficile colitis in large clinical trials (26), although this approach can potentially bring new challenges, such as outlining suitable donor characteristics and regulating donor material testing to avoid transmission of infection or disease. 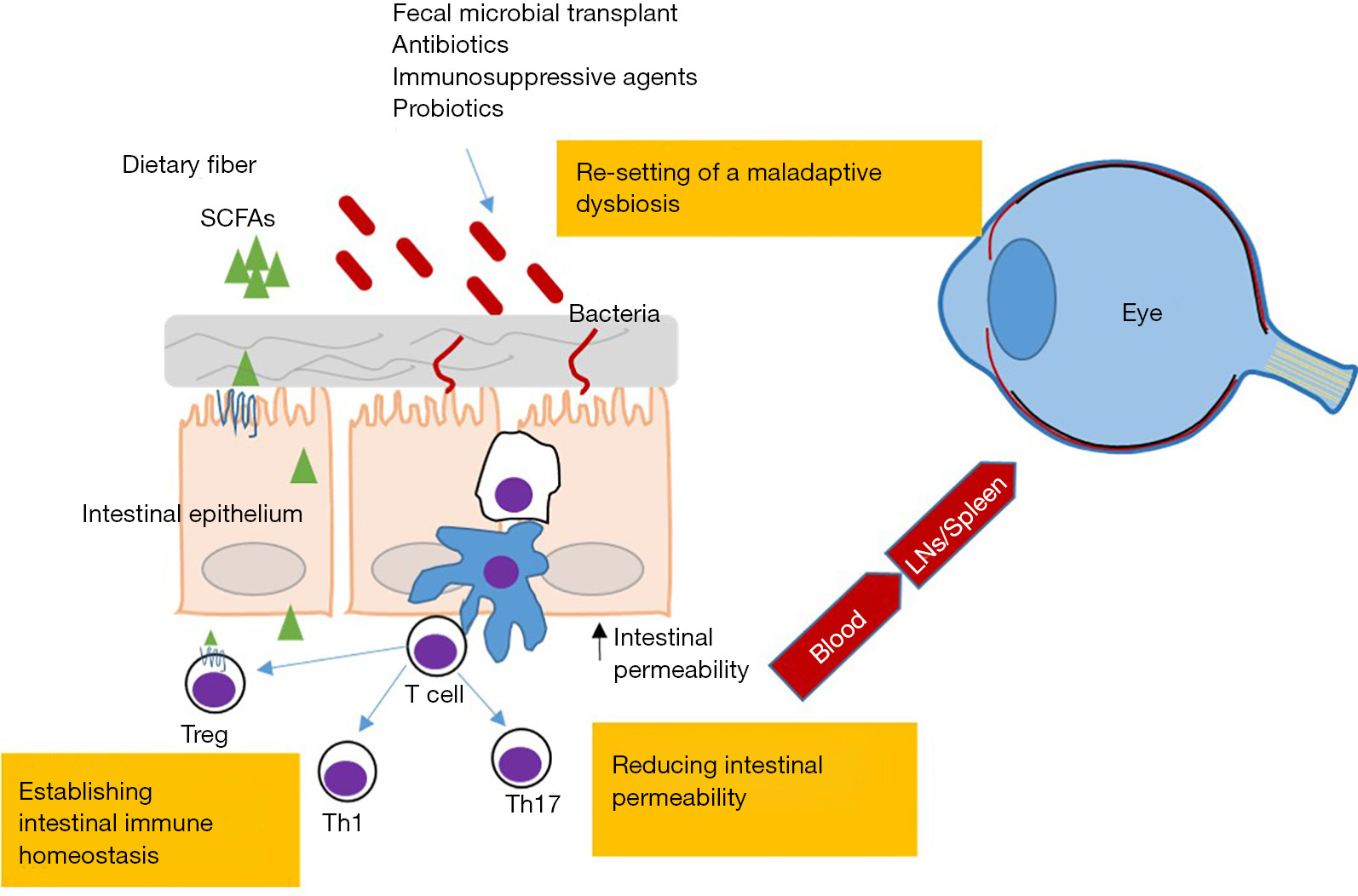 Increasing evidence reveals the significance of the gut microbiome in non-infectious uveitis, potentially as a contributor to the pathogenesis of disease, perhaps representing the intersection of genetic risk and environmental factors that trigger disease. Larger comprehensive studies will be crucial to verify which microbial cohorts are beneficially adaptive vs. maladaptive in uveitis, and to determine the timing in the course of disease that the dysbiosis is most important. With additional knowledge in this area, it seems feasible that one might prevent disease progression or recurrence using one or several strategies altering the gut microbiome such as through diet, specific antibiotic regimens, probiotics, oral supplementation of certain bacterial metabolites, or via fecal microbial transplantation.

Funding: This study was supported by a National Eye Institute Grant K08 EY022948, a Collins Medical Trust Grant, and a Research to Prevent Blindness Career Development Award (PL). This study was also supported by core grant P30 EY010572 from the National Institute of Health (Bethesda, MD) and by unrestricted departmental funding from Research to Prevent Blindness (New York, NY). PL is also the recipient of an Alcon Research Institute Young Investigator Award and OHSU Physician-Scientist award, as well as recipient of a Thome Foundation award.

Conflicts of Interest: The author has completed the ICMJE uniform disclosure form (available at http://dx.doi.org/10.21037/aes-19-114). The series “Innovations in the Diagnosis and Management of Uveitis” was commissioned by the editorial office without any funding or sponsorship. PL reports grants from Alcon, other from Mallinckrodt, other from Clearside, outside the submitted work. The author has no other conflicts of interest to declare.

Ethical Statement: The author is accountable for all aspects of the work in ensuring that questions related to the accuracy or integrity of any part of the work are appropriately investigated and resolved.