Charles Bonnet syndrome (CBS) is a benign condition characterised by complex visual hallucinations in individuals with visual impairment (1). Approximately one-third of affected patients suffer from distress as a direct consequence of their hallucinatory experiences (2). The distress is often caused by fear of impending insanity, and may be propagated by lack of awareness and knowledge about CBS (3). The proportion of patients with glaucoma that are familiar with CBS is unknown. Therefore, we sought to investigate this in a population with primary open-angle glaucoma (POAG).

Our study was part of a larger, yet unpublished, prospective study of the prevalence and clinical characteristics of CBS in POAG. Patients with a known diagnosis of POAG that had visited the glaucoma clinic at Skåne University Hospital in Malmö, Sweden, between April 1st 2018 and December 31st 2018 were included. We excluded patients with concurrent neurological and/or psychiatric disorders, or other known causes of vision loss, e.g. late-stage age-related macular degeneration. We explored the patients’ precursory knowledge of CBS using the question (translated to Swedish): “Some patients with poor eyesight see things which they know are not there. These hallucinations occur on repeated occasions and are described as being vivid and complex, e.g., persons, animals, flowers, or patterns. This phenomenon is known as Charles Bonnet syndrome. Have you ever heard or read about this?” in a written questionnaire (4). Patients responding affirmatively were contacted and further interviewed. Results from the patients’ visual acuity (VA) examinations and automated visual field tests were obtained from the medical records. The results closest in time to when the patient had responded to the questionnaire were chosen. Best corrected visual acuity (BCVA) was tested in both eyes using an electronic Snellen chart, and the automated visual field test 24-2 or 30-2 was conducted using the Swedish interactive thresholding algorithm on the Humphrey Field Analyser (Carl Zeiss Meditec, Dublin, CA, USA). Patients with suspected CBS also underwent objective examination of both maculae using Swept Source - Optical Coherence Tomography (Triton, Topcon, Medical Systems, Tokyo, Japan).

Statistical analysis was performed using the SPSS software (version 25, IBM, Chicago, IL, USA). For categorical data Fisher's exact test or Pearson’s chi-square test were used when the data sample was small or large, respectively. For continuous non-parametric variables, the Mann-Whitney U test was applied. A significance level of <0.05 was employed.

A total of 338 patients with definitive glaucoma, i.e., confirmed glaucomatous visual field defects on at least two consecutive tests, were included in this study. Twelve (3.5%) patients claimed they had precursory knowledge of CBS when answering the written questionnaire. Four (1,2%) of these did, in fact, exhibit prior knowledge of CBS when contacted and interviewed. Two declared knowledge of CBS because a close relative with AMD had experienced visual hallucinations. One acquired knowledge through the internet and one was informed when she consulted a nurse in the eye department by phone due to visual hallucinations. One patient did not answer the phone despite repeated attempts. The remaining seven patients stated they had misinterpreted the questionnaire or could not remember the reason for their answer.

There were no statistical significant differences in age, gender, visual field parameters, best corrected visual acuity, laterality of glaucoma, or macular pathology between those who had knowledge of CBS and those that did not (Table 1). 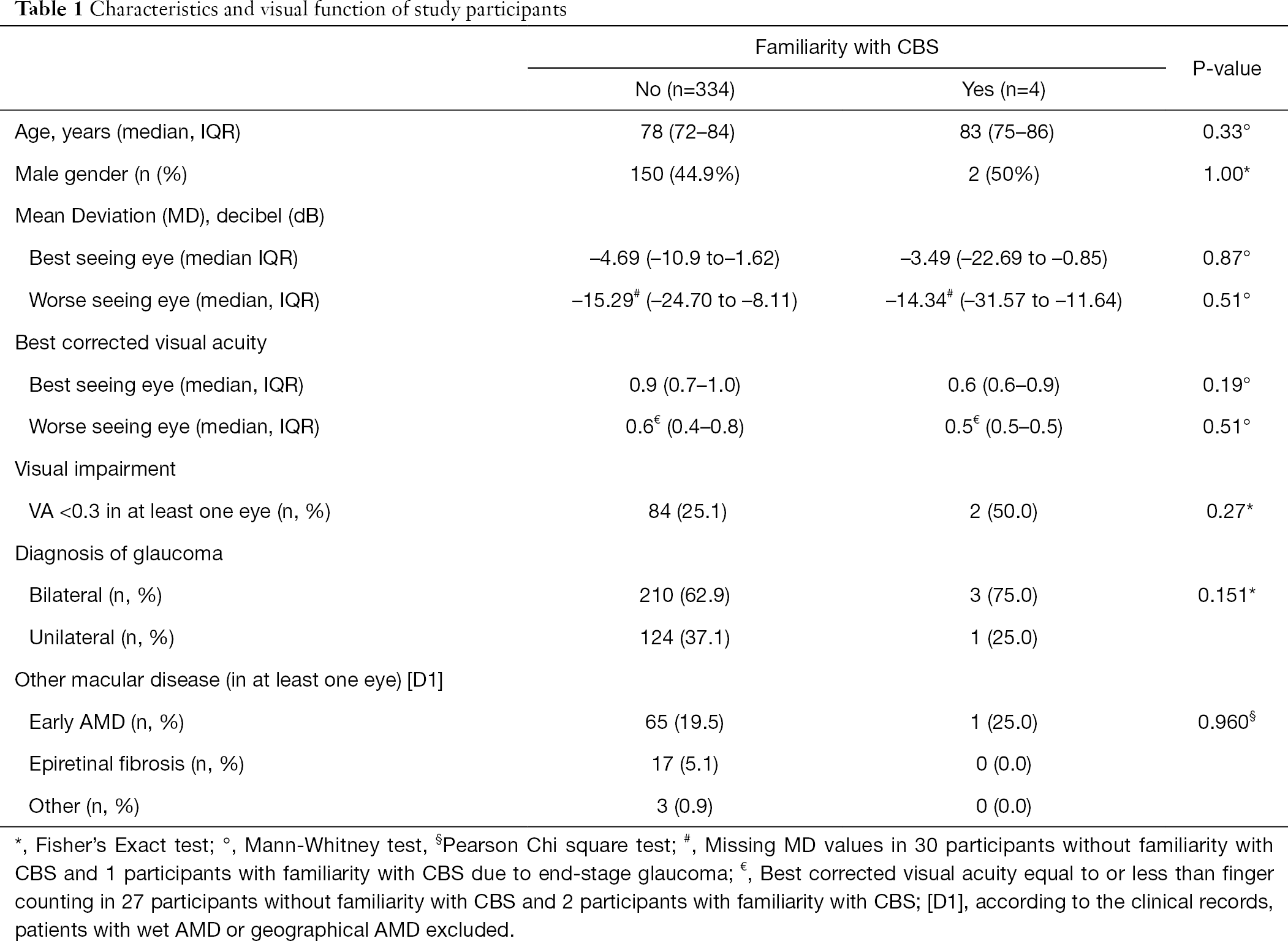 According to our study, only 1.2% of patients with a diagnosis of POAG are familiar with CBS. This is a perturbingly low figure even compared to patients with late-stage AMD (where only 12% are aware of CBS) (5). The low degree of knowledge of CBS among visually impaired patients is presumably due to a lack of information and patient education. One reason for this may be that awareness of CBS is inadequate also among physicians and healthcare workers. Another reason could be that physicians and healthcare workers allot less significance to CBS as it is generally considered to be a benign condition. The degree of knowledge of CBS among ophthalmologists has not been investigated, but among general physicians it has been found to be low (6).

The prevalence of glaucoma is approximately 6% in patients aged 70 or older, and the risk of visual impairment in this group is considerable (7). A significant number of glaucoma patients should therefore be at risk of experiencing CBS. Thus, it is important to be aware of the syndrome in order to give correct and comprehensible information to these patients. Considering a majority of patients are reluctant to spontaneously share their experiences, enquiry about hallucinatory symptoms is also of great importance, especially as reassurance and education about CBS may be all that is required to help reduce anxiety in most patients (8).

There were some limitations to this study. First, the results may not be applicable to all populations since there are regional differences in the amount of knowledge available online (English being the most common language). Secondly, there may be regional and/or cultural differences in the prevalence of CBS, which in turn may affect the general awareness about the condition. Moreover, selection bias may have occurred during the inclusion process as some of the patients refused to participate in the study and one patient who declared precursory knowledge of CBS was unavailable for a subsequent telephone interview. Finally, as the proportion of patients with knowledge of CBS was very low, any comparison of demographic and clinical data between patients who were familiar and patients who were not familiar with CBS, would be associated with uncertainty.

In conclusion, we report that awareness of CBS is almost absent in a population with POAG. Measures to increase general awareness should be explored further as these will help minimise distress and unnecessary investigations and referrals.

Funding: Järnhardt foundation, Foundation for Visually Impaired in Former Malmöhus County and the Foundation of Margit and Kjell Stoltz.

Conflicts of Interest: All authors have completed the ICMJE uniform disclosure form (available at http://dx.doi.org/10.21037/aes-20-115). AS serves as an unpaid editorial board member of Annals of Eye Science from Jun 2020 to May 2022. DP reports grants from Järnhardt foundation, grants from Foundation for Visually Impaired in Former Malmöhus County, grants from Foundation of Margit and Kjell Stoltz, during the conduct of the study. The other author has no conflicts of interest to declare.