The funduscopic parapapillary beta zone defined by visible choroidal vessels and the sclera has been put forward for about 30 years (1). With the application of spectral domain optical coherence tomography (SD-OCT), the funduscopic beta zone has recently been divided into 2 subzones: gamma zone and (new) beta zone (2,3). Parapapillary gamma zone was defined as the peripapillary region free of Bruch’s membrane (BM), and the (new) parapapillary beta zone was defined by the continued presence of BM and absence of retinal pigment epithelial.

Several studies have shown that parapapillary beta zone was associated with age and glaucoma, while parapapillary gamma zone was strongly correlated with axial myopia (3-5). It has been suggested that the development of gamma zone was related to a vertical optic disc rotation during axial elongation and the reduced risk of macular BM defect (6,7). However, gamma zone could be observed in hyperopic eyes, whose location and morphology seem to be different with those in myopic subjects. We hypothesized that factors other than axial myopia may be correlated with the onset and development of gamma zone. Therefore, we conducted this study to explore the microstructural features of parapapillary gamma zone and beta zone in non-myopic healthy eyes by using the enhanced depth imaging technology of SD-OCT. We present the following article in accordance with the STROBE guideline checklist (available at http://dx.doi.org/10.21037/aes-20-88).

The participants included were from the Shanghai Eye & ENT Hospital of Fudan University from June, 2017 to April, 2019. The participants included were required to have refractive error no less than −1 D, axial length less than 24.5 mm, and a best corrected visual acuity of 0.6 or more. Meanwhile, we excluded those with ophthalmic diseases (e.g., glaucoma, diabetic retinopathy) or history of refractive surgery. The study protocol was approved by the Institutional Ethics Committee. All subjects consented to participate before the ophthalmologic examinations were performed. The study protocol and data collection adhered to the tenets of the Declaration of Helsinki (as revised in 2003) and was approved by the Institutional Review Board of Shanghai Eye & ENT Hospital of Fudan University (2019-003). All study participants consented to the ophthalmologic examinations before they were performed.

Microstructure of peripapillary atrophy (PPA) area has been divided to alpha, beta and gamma zones (3). The alpha zone was characterized by the presence of BM covered by an irregular retinal pigment epithelium (RPE), while in beta zone BM was devoid of RPE cells, and gamma zone extended between the end of BM and the inner border of peripapillary ring as the optic disc border. The area of beta zone and gamma zone were measured by the measurement tools built in the Spectralis HRA + OCT software. Measurements were performed by a masked observer (D Zhuang).

Assessment of disc rotations around 3 axes and optic disc shape

SPSS 22.0 (IBM Corp., Armonk, NY, USA) was used for data analysis. Continuous variables were presented as means ± standard deviations, category variables as n (%). Student’s t-test was used to evaluate data between two groups. Univariate analysis was performed to determine the correlations between the size of gamma and beta zone and major ocular parameters. Those parameters which showed significant associations in the univariate analysis were further included in multivariate linear regression analysis to explore the independent factor. Two-tailed P<0.05 was considered statistically significant. 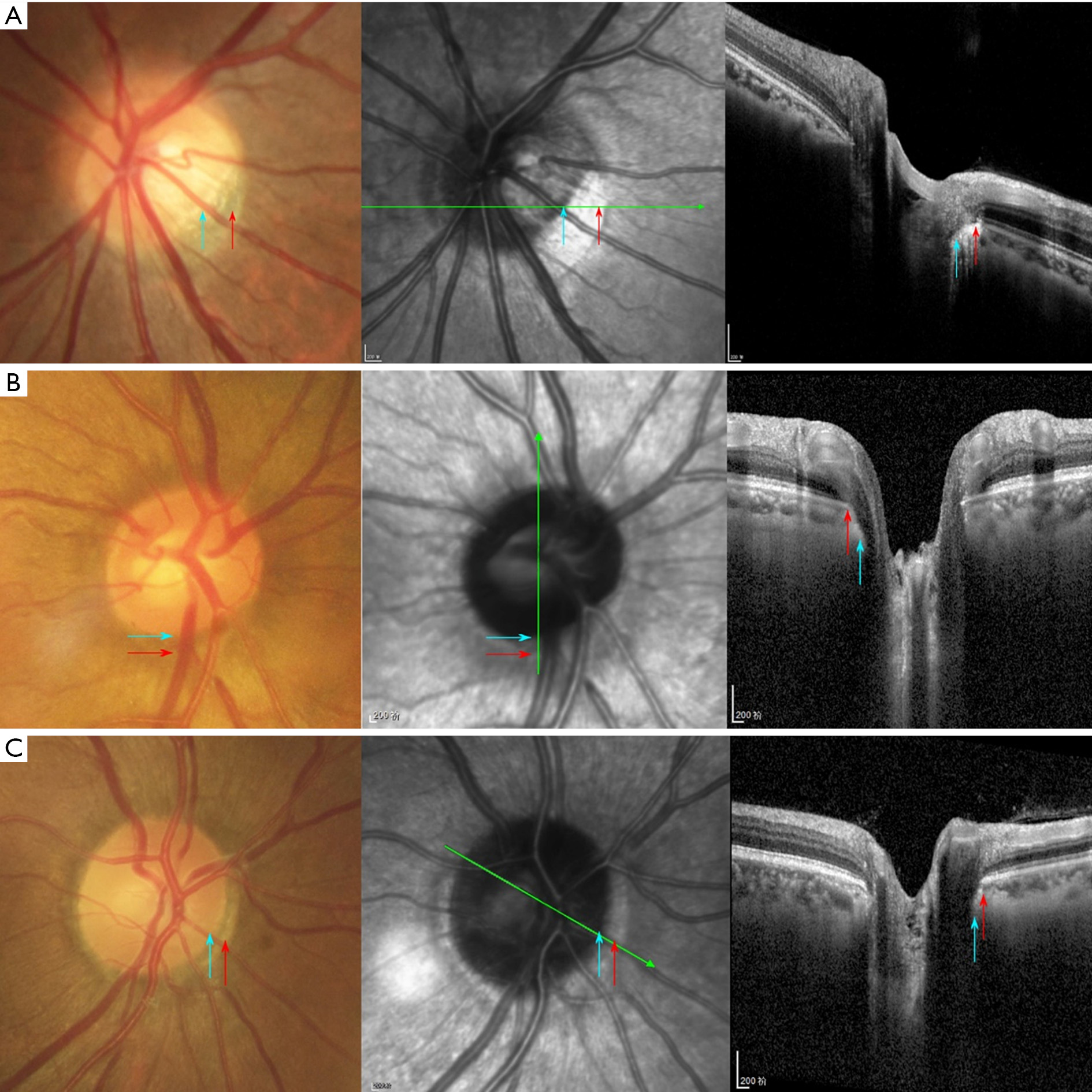 Figure 1 Fundus photograph and OCT images of the parapapillary gamma zone (between blue arrow and red arrow) in the non-myopic eyes. The gamma zone, which is composed by externally oblique border tissue, could locate in temporal (A), inferior (B) and nasal (C) regions around disc in non-myopic eyes. 567 mm × 761 mm (72 × 72 DPI). Green arrows indicate location of the B-scan. OCT, optical coherent tomography. 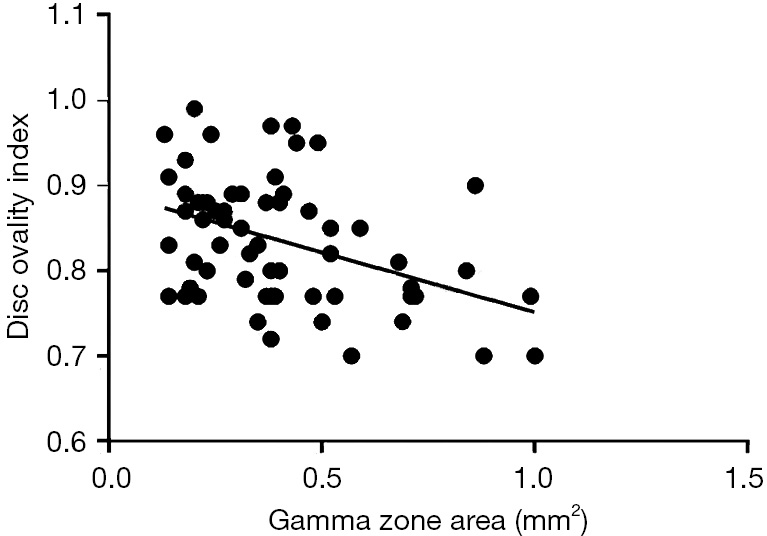 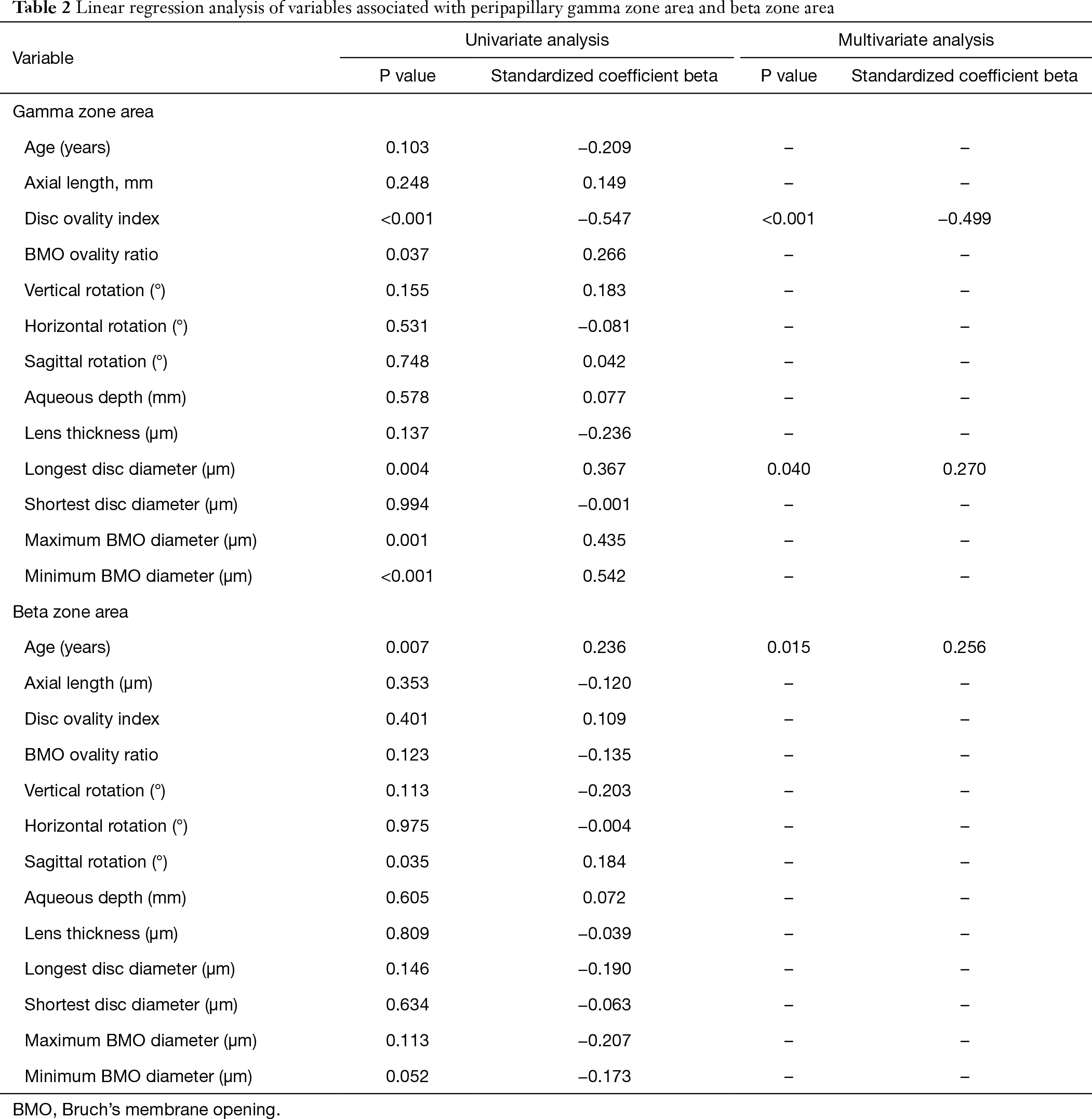 These results demonstrated that in non-myopic eyes, the parapapillary gamma zone located quite often in peripapillary inferior and nasal regions, other than temporal region. The presence of gamma zone was significantly correlated with the disc ovality index, BMO ovality ratio and disc rotations around vertical and horizontal axes. In eyes with gamma zone, the BMO ovality ratio was significantly higher than ovality index and closer to 1. While the presence and area of beta zone was only associated with age in non-myopic eyes, no significant relationship was found with disc rotation around 3 axes and ovality index.

Our findings revealed that the presence of gamma zone was associated with tilted discs in non-myopic eyes. A tilted optic disc was previously defined as a disc ovality index less than 0.75–0.80 according to fundus photos (9,10). In the current study, we further measured the disc diameters and disc rotation angles around 3 axes based on SD-OCT images, which could provide more accurate data about three-dimensional optic disc shape (8). Tilted optic discs have been reported as a morphologic feature associated with myopia (9-12). In myopic eyes, gamma zone was located most often in the temporal peripapillary region. It has been suggested that the development of gamma zone was associated with the reduced risk of macular BM defect during myopic axial elongation (7). In accordance with this notion, our data found that compared with the non-temporal gamma zone group, eyes with temporal gamma zone had a longer axial length and rotated more around vertical axis. However, gamma zone was often located in the nasal and inferior regions whose average axial length of those eyes was 22.34 mm in our study, suggesting other factors may involve in the gamma zone development in non-myopic eyes. The interrelationship among the presence of gamma zone, the decreased disc ovality index, and the increased BMO ovality ratio, indicates the biomechanical role that parapapillary gamma zone may play in disc stability. It could be postulated that the shape of BMO tends to keep round to make structures strong in response to biomechanical influence around optic nerve head. If there is no gamma zone neighboring the tilted disc, the shape of the BMO would be not enough round and probably less stable.

The parapapillary gamma zone in non-myopic eyes appeared to be composed by externally oblique border tissue in SD-OCT images. Our data indicated that the length of externally oblique border tissue was strongly associated with the gamma zone area and disc ovality index. In myopic eyes, it may additionally include peripapillary elongated sclera flange as part of gamma zone (5,13). Anatomically, the optic nerve head is a three-layered foramen in the posterior region of the ocular globe. The first layer is BM, forming the papillary BM’s opening. The second layer is the peripapillary choroid which opens up in the region of the optic nerve head. The deepest layer is formed by the peripapillary scleral flange and act as a biomechanical anchor for the lamina cribrosa (14). While BM simply ends at the border of BM opening, the edge of the peripapillary choroid and sclera flange is separated from the intrapapillary region by border tissue of Elschnig and Jacoby (15,16). The gamma zone and its underlying border tissue connecting between BM and the optic nerve pia mater may have importance for biomechanical stability of optic nerve head. It may also have potential importance for optic disc head related diseases, such as glaucoma. Previous reports have showed that gamma zone is related to the absence of glaucoma. The rate of glaucoma progression was slower for eyes with beta zone devoid of BM (equivalent to gamma zone) than for eyes with beta zone with intact BM (17,18). Further studies are needed to clarify whether gamma zone has a protective effect to on glaucomatous optic neuropathy and its mechanism.

There are several limitations to our study. First, this was a hospital-based research so that the prevalence of gamma zone and the prevalence of titled discs in non-myopic eyes cannot be calculated, which might be much lower than those in myopic eyes. These values may be of importance to clarify the biomechanical role of the parapapillary gamma zone. Second, as a cross-sectional research, this study was unable to investigate the dynamic process of gamma zone formation. It also held true for tilted and rotated optic discs. The reported prevalence of tilted optic discs in adult was 3.5% in Tanjong Pagar study (9) and 1.6% in Blue Mountains study (11). However, there was no report on these values in infants and children. Previous longitudinal studies in children have showed that tilted disc and PPA may be an acquired feature in myopic eyes (23). As the myopic peripapillary tissue changed, the size and shape of the border tissue changed, whereas the BMO diameter remained relatively stable. Knowledge gained on the developmental change of optic disc and peripapillary region in emmetropic and hyperopic eyes will greatly help to understand the optic nerve head biomechanics.

In summary, our findings demonstrated that the presence of gamma zone was correlated with a more oval disc rotated around vertical and horizontal axes in non-myopic eyes. From a biomechanical perspective, parapapillary gamma zone and its underlying border tissue may contribute to optic disc stability in association with the structure of BMO. Future studies are warranted to address the role of parapapillary gamma zone involved in the susceptibility of glaucomatous optic neuropathy.

Funding: Supported by the grants from Science and Technology Commission of Shanghai Municipality (No. 16411962000). The sponsor or funding organization had no role in the design or conduct of this research.

Reporting Checklist: The authors have completed the STROBE reporting checklist. Available at http://dx.doi.org/10.21037/aes-20-88

Conflicts of Interest: All authors have completed the ICMJE uniform disclosure form (available at http://dx.doi.org/10.21037/aes-20-88). The series “Ophthalmology Clinical Research” was commissioned by the editorial office without any funding or sponsorship. The authors have no other conflicts of interest to declare.

Ethical Statement: The authors are accountable for all aspects of the work in ensuring that questions related to the accuracy or integrity of any part of the work are appropriately investigated and resolved. The study protocol and data collection adhered to the tenets of the Declaration of Helsinki (as revised in 2003) and was approved by the Institutional Review Board of Shanghai Eye & ENT Hospital of Fudan University (2019-003). All study participants consented to the ophthalmologic examinations before they were performed.