APAC has a higher incidence in parts of Asia; for example, its revealed occurrence is 12.2/100,000 per year in Singapore Chinese and 10.4/100,000 per year in Hong Kong Chinese (4). Early biometric research (5,6) has demonstrated that the APAC eyes often have a shallower anterior chamber, a smaller corneal diameter, a thicker lens, and a shorter axial length than is seen in normal eyes. However, the development of imaging diagnostic techniques continues to uncovering extra physiological components that are equally significant, particularly concerning the triggering of an acute attack.

The aim of this study was to investigate the structural features of the anterior and posterior segments of APAC-affected eyes by comparing the APAC-affected eyes with their fellow eyes, together with longitudinal follow-up observation of the structural features after iridectomy. We present the following article in accordance with the STROBE guideline checklist (available at http://dx.doi.org/10.21037/aes-20-87).

This is an observation study. The study was approved by the Ethical Review Committee of the Zhongshan Ophthalmic Center (ID: 2012KYNL037), and was performed in compliance with the Declaration of Helsinki (as revised in 2013). All participants received a detailed explanation of the study and signed an informed consent form. This study was conducted from April 2014 to April 2017.

Patients suffering unilateral APAC attacks [the fellow eyes were diagnosed with primary angle closure suspect (PACS)] were recruited to participate in the study. APAC was characterized dependent on the following criteria (4): (I) presence of at least two of the following manifestations: nausea and/or vomiting, ocular or periocular pain, and a precursor history of intermittent blurring of vision with halos; (II) presenting an IOP ≥22 mmHg (as estimated by Goldmann applanation tonometry); (III) the presence of at least three of the following manifestations: corneal epithelial edema, a shallow anterior chamber, and mid-dilated unreactive pupil; and (IV) the presence of an occluded angle in the attacked eye, confirmed by gonioscopy. PACS was characterized as a pigmented trabecular meshwork in the eye not visible for ≥180 degrees under static gonioscopy, without peripheral anterior synechiae or glaucomatous neuropathy, and with an IOP <21 mmHg. All eyes experienced an ultrasound biomicroscopy (UBM) assessment to affirm the presence of a narrow-angle pupillary block segment.

Patients with any of the following criteria were rejected: a secondary acute attack due to tumor; trauma; iris neovascularization; lens subluxation; uveitis; any conspicuous cataract cause an intumescent lens; a pre-existing ocular disease (such as age-related macular degeneration, retinal vein occlusion, retinal artery occlusion, and diabetic retinopathy, etc.); a history of previous ocular surgery; opacities of the optical media; or difficulty in fundus examination and OCT imaging.

The APAC eyes were treated with standard medical treatment. This comprised topical pilocarpine, timolol, Azopt, Alphagan, and topical steroids. Intravenous mannitol and oral acetazolamide were added in cases where the IOP was not decreased by 20%. After the initial medical treatment, all APAC eyes underwent surgical iridectomy, which was performed by same surgeon (X.Z.). Although laser iridotomy has become the first-line treatment of APAC in recent years, surgical iridectomy was chosen in the present study because it is covered by hospitalization insurance in China.

The SS-OCT measurements immediately followed the AS-OCT measurements. Details of the SS-OCT measurement protocol of the macular region are available in our previous report (14). A 3D imaging scan pattern was used, and the images were analyzed using built-in manufacturer’s software (9.12.003.04). A 6×6 mm2 thickness map of five layers [retinal nerve fiber layer (RNFL), ganglion cell layer plus (GCL+), ganglion cell complex (GCC), retina, and choroid] was automated segmentation by the manufacturer’s software. A 6×6 mm2 scan grid was used for the thickness map, and the mean regional thicknesses were calculated for the 36 sectors of the grid.

By using the difference test, a significance level below 0.05 was set and a power of 0.80 to detect an average ACD difference of 0.2 mm with a 0.3 mm standard error, it was estimated that a minimum of 20 eyes were needed. All statistical analyses were calculated using SPSS (Version 13.0; SPSS, Chicago, IL) statistical software. Statistical significance was accepted at P<0.05. First, the anterior and posterior segment parameters were compared between APAC-affected eyes (baseline) and fellow eyes using a paired t-test. Second, a paired t-test was used again to compare the variables at different time points (baseline, 2 weeks, and 1 month after surgery). In this model, to adjust for multiple comparisons, P values of 0.017 for paired t-tests were regarded as statistically significant, with significance levels of 0.05 dependent on Bonferroni's strategies. Third, the Pearson correlation was used to determine the factors affecting the changes in the ACD. Lastly, the theory of choroidal expansion, proposed by Quigley et al. (12), was verified using uni- and multivariate linear regression to identify the relationship between choroidal thickness and anterior segment parameters in the baseline of APAC-affected eyes.

The study included 36 subjects with unilateral APAC that met the inclusion and exclusion criteria. The recruitment and follow-up of subjects are illustrated in Figure 1. All fellow eyes had a diagnosis of PACS. The mean age of the patients was 60.0±8.4 years, with 29 females and 7 males. The mean IOP at presentation was 46.2±10.3 mmHg. The median duration of experienced attack was 3.5 days (range, 1 to 7 d). The demographic and baseline characteristics of the patients are shown in Table 1. Most patients had an IOP that remained at less than 21 mmHg for the duration of the study after peripheral iridectomy, except for three patients who required IOP-lowering medications after surgery.

Figure 1 Flowchart showing recruitment and follow-up in the study. 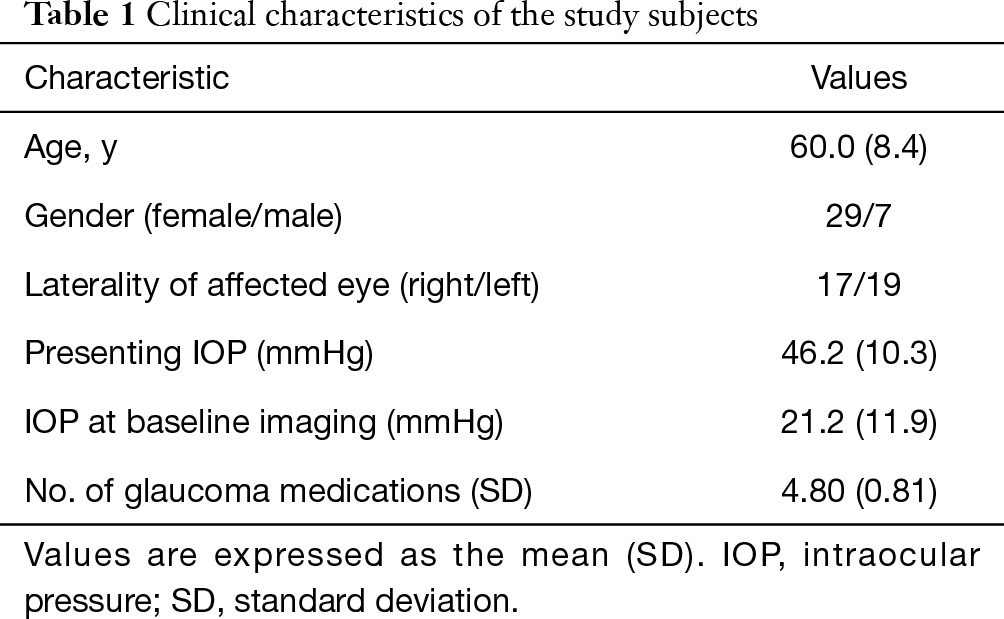 The results of a comparison of ocular biometric parameters between APAC-affected eyes and fellow eyes are summarized in Table 2. As expected, the IOP was higher in the APAC-affected eyes than in the fellow eyes (P=0.009). No differences were detected in SE and AL. The AS-OCT measurement parameters revealed significantly greater corneal thickness (P=0.004); shallower ACD (P<0.001); and smaller ACA (P=0.013), AOD750 (P=0.002), TISA750 (P=0.033), ARA (P=0.014), and IARE (P=0.003); less ICURVE (P=0.003), and larger LV (P=0.030) in the affected eyes than in the fellow eyes. No significant differences were evident in the posterior segment parameters (including RNFL, GCL+, GCC, retina, and choroidal thickness) of the affected and fellow eyes.

APAC-affected eyes at baseline, 2 weeks, and 1 month after intervention 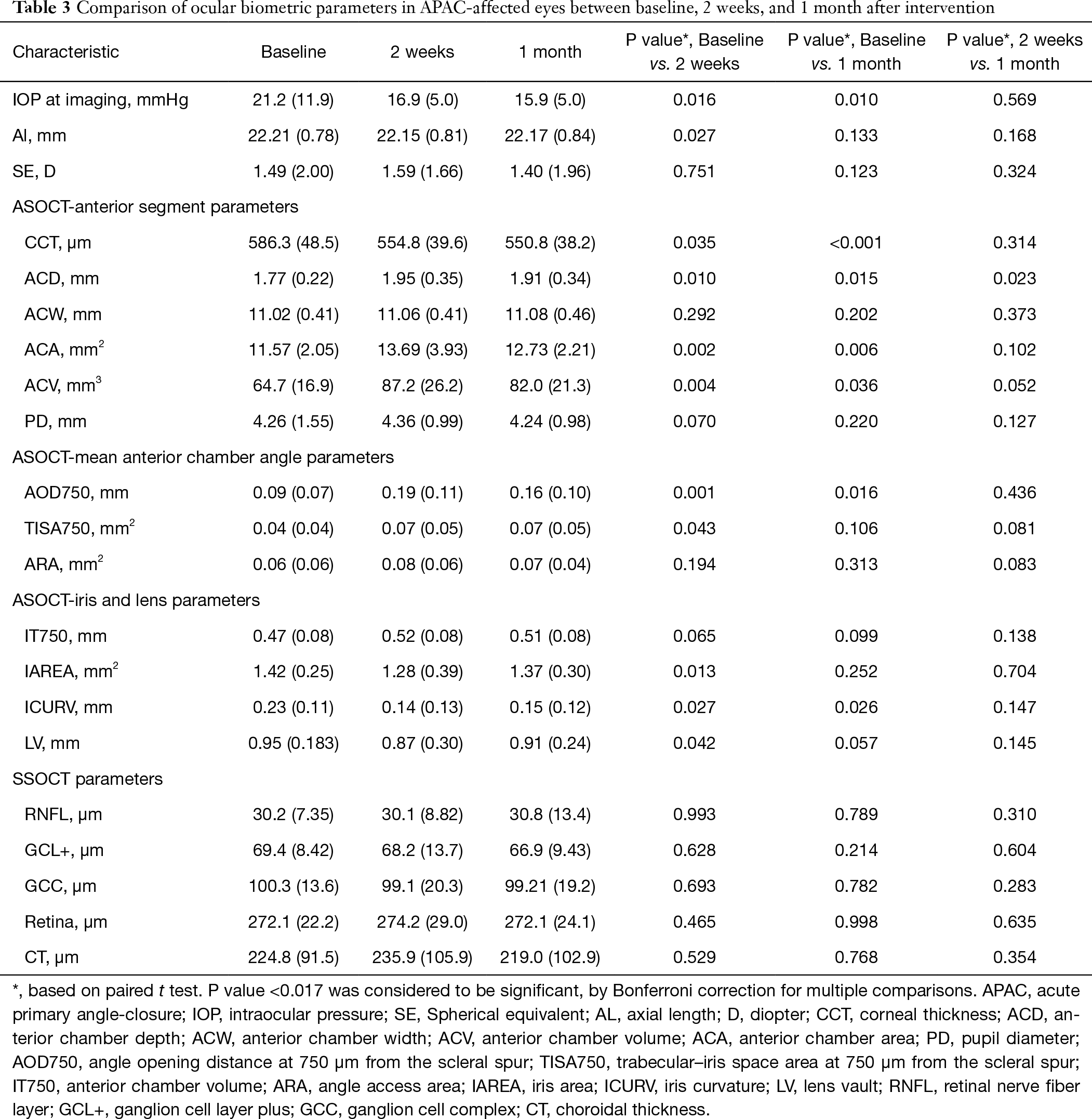 In the present study, our aim was to achieve a better understanding of the anatomical characteristics of APAC eyes by incorporating concurrent AS-OCT and SS-OCT measurements. The present study findings confirmed that APAC-affected eyes had greater corneal thickness, shallower ACD, narrower angle, smaller ACA and IARE, less ICURVE, and larger LV than the fellow eyes. This is consistent with the results of recent AS-OCT study in Korean patients (7). The longitudinal follow-up observation of the structural features after iridectomy revealed that cornea thickness was significantly decreased at 1 month, while ACD, ACA, and AOD750 were significantly increased at 2 weeks and 1 month. These observations are similar to those of preliminary investigations that proposed an association between laser iridotomy and increases in central ACD [Gazzard, personal communication, quoted in Quigley et al. (12)]. However, no significant changes in posterior segment parameters (including RNFL, GCL+, GCC, retina, and choroidal thickness) were found over the 4-week period.

Previous studies have recommended that a shallower ACD has a higher risk for an acute attack (16,17). A shallower ACD has been considered as one of the main biometric parameters related with APAC during the attack (18). Our study showed that the ACD was smaller in the acute eyes than in the fellow eyes and that ACD was increased after iridectomy. This further accentuates the importance of a shallow ACD in terms of susceptibility to an acute attack, and suggests that APAC progression may be associated with changes in ACD. The ACD value is affected by the LV and posterior corneal surface height. In the present study, changes in ACD showed a correlation with decreasing LV. The importance of the LV in angle closure has been well established (16). Similar to our findings, Sng et al. demonstrated that the LV was a significant determinant of ACD, contributing 58% of its variability (17).

The reason for the shallower ACD and larger LV in affected eyes is still unclear. Positive correlation between LV with increasing age has been reported previously (19). Aging can increase lens thickness, which cause LV increases (20,21), yet this brings up another issue in regards to other different reasons for larger LV in the affected eye compared to the fellow eye within the same patient. Quigley et al. (12) have hypothesized choroidal expansion as a potential component for anterior lens movement. They theorized that choroidal expansion incidental with increase of intraocular volume could cause an immediate IOP increase.

Some potential limitations in our study should be mentioned. First, measurements were done after interventions for the acute attack, so potential trigger factors may already have resolved. The effect of glaucoma drugs may also have had a substantial effect on ocular biometry. Hence, the baseline measurements may only approximate the true baseline at the onset of the attack. This points out the difficulty in recognizing subtle physiological changes in such a dynamic situation. Second, surgical iridectomy is a significant confounder since this is an intraocular procedure that in itself may affect the ocular biometric characteristics. The iridectomies in the present study were performed by the same specialist to minimize potential surgical effects. Finally, all of these studies were conducted on Chinese individuals, so evaluation of this phenomenon in other populations would be interesting. Besides these limitations, valuable information still can be gained from this study. We believe that the results of this study will be useful in future studies about this topic.

In this study, we used AS-OCT and SS-OCT for concurrent measurements of anterior and posterior segment structural features of APAC. We found greater cornea thickness, shallower anterior chamber, narrower angle, less ICURVE, and larger LV in APAC-affected eyes than in fellow eyes. Iridectomy decreased the cornea thickness, while ACD, ACA, and AOD750 were significantly increased. An association analysis between choroidal thickness and anterior segment parameters revealed no any evidence to support the mechanism of choroidal expansion as a possible physiological trigger accounting for APAC.

Thanks Prof. Mingguang He for providing the Zhongshan Angle Assessment Program (ZAAP, Guangzhou, China) for us to analyze the data.

Provenance and Peer Review: This article was commissioned by the editorial office for the series “Ophthalmology Clinical Research” published in Annals of Eye Science. The article has undergone external peer review.

Reporting Checklist: The authors have completed the STROBE reporting checklist. Available at http://dx.doi.org/10.21037/aes-20-87

Conflicts of Interest: All authors have completed the ICMJE uniform disclosure form (available at http://dx.doi.org/10.21037/aes-20-87). The series “Ophthalmology Clinical Research” was commissioned by the editorial office without any funding or sponsorship. XZ served as the unpaid Guest Editor of the series. The authors have no other conflicts of interest to declare.

Ethical Statement: The authors are accountable for all aspects of the work in ensuring that questions related to the accuracy or integrity of any part of the work are appropriately investigated and resolved. The study was approved by the Ethical Review Committee of the Zhongshan Ophthalmic Center (ID: 2012KYNL037), and was performed in compliance with the Declaration of Helsinki (as revised in 2013). All participants received a detailed explanation of the study and signed an informed consent form.