Transcutaneous approaches involve infraorbital, subtarsal, and subciliary incisions, which provide excellent visualization of the orbital floor and surrounding structures. After being reported by Converse in 1944, it soon became widely applied in orbital surgery (3). The infraorbital approach is made in the skin crease at the level of the inferior orbital rim. The orbicularis oculi muscle is then divided under the incision (4). Subsequently, the orbital floor periosteum is present and dissected to expose the fracture, usually without violating the orbital septum fat or the capsulopalpebral fascia.

Although Subtarsal incision is frequently referred to as “subtarsal”, its exact location in the eyelid has not been delineated clearly. Some advocate placing the incision within a natural skin crease, whereas others argue that it should be performed as close to the inferior border of the tarsal plate as possible (5). Orbicularis oculi muscle is then bluntly dissected in the same plane until the periosteum is reached.

In addition, there are preexisting lacerations and scars in some facial traumas, which can also be used as a surgical approach to repair adjacent orbital fractures.

All types of transcutaneous approaches, including subciliary, subtarsal and infraorbital, are confirmed to be associated with different degrees of perceptible scars. A retrospective study indicated that the incidence of scar conspicuousness usually occurred in infraorbital incisions (11) (Figure 1). Some studies advocate that subtarsal scars are almost invisible or completely invisible several months postoperatively (3). Many decisive factors may alleviate scars from the subtarsal approach, e.g., a proper natural skin crease and corresponding incision along the skin tension line, spatial correspondence of the approach to the inferior tarsal plate, careful preparation, and anatomically layer-to-layer wound closure (3). Preexisting lacerations and scars may be aggravated by secondary incision but will not create new scars. Subciliary scar is considered to be almost invisible. Most studies advocate the simple transconjunctival approach with adequate exposure and no visible scar (12). 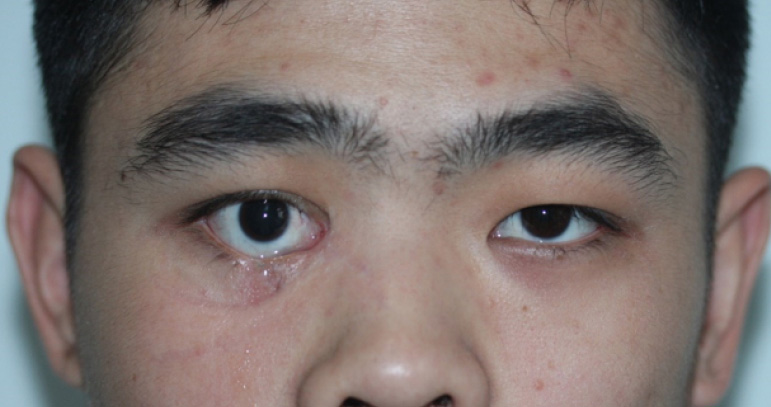 The lower eyelid is suspended and supported by the tarsus, capsulopalpebral fascia, orbicularis oculi muscles, lateral and medial canthal tendons. It is subdivided into three lamellae. The anterior lamella is skin and orbicularis oculi muscle. The middle is orbital septum and fat. The posterior one is conjunctiva and capsulopalpebral fascia (13). The lower eyelid septum starts at the arcus marginalis, extends along the infraorbital rim, and enters into the capsulopalpebral fasci a or lower lid retractors (14). Any event, either traumatic or iatrogenic, contributing to the septum contracture, will pull the lower lid down from its normal position (15,16). Ectropion after orbital fracture surgery occurs mainly due to cicatricial shortening of the anterior lamella of the eyelid, scar contracture, and the loss of muscle tonus. The highest incidence rate of ectropion was found in a laceration approach (11.1%), followed by preexisting scars approach (6.3%), because of severe scar contracture and anterior lamella shortening (17). Ectropion also commonly occurs in a transcutaneous approach, especially in the subciliary (Figure 2). One meta-analysis showed a highest rate (14%) of ectropion in subciliary incisions compared with other orbital approaches (6). Some studies suggested the subtarsal incision had less risk for eyelid vertical shortening and decreased incidence of entropion (18). Very few reports have indicated ectropion as a complication of the transconjunctival approach (19).

Based on surgical observations, the pathogeny of lower eyelid retraction is multifactorial. It includes inadequate skin (insufficiency of anterior lamellar); scar of lower eyelid retractors, or cicatricial contracture between septum and capsulopalpebral fascia; middle lamellar inflammation; lateral canthal tendon laxity and midface descent. Lower eyelid laxity most commonly results from laxity or disinsertion of lateral canthal tendon. Iatrogenic or traumatic contracture of orbital septum will contribute to lower eyelid pulled down from the normal position. Furthermore, the lower eyelid is supported by many adjacent tissues including tarsus, orbicularis oculi muscle, capsulopalpebral fascia, lateral and medial canthal tendons. Any disturbance of these suspending anatomical structures will increase the risk of eyelid malposition.

It has been suggested that lower eyelid retraction is usually combined with midface descent and occasionally ectropion. Although the subciliary incisional approach has a significantly higher incidence of ectropion and scleral show than the subconjunctival approach (20) (Figure 2), postoperative eyelid retraction may still occur in the transconjunctival approach, especially in lateral extension (21). Lateral canthotomy increases the risk of lower lid complications due to the disturbance of anatomical structures and the difficulty of reattaching the lateral canthal ligament in the correct position (22,23). Researchers devised some modifications such as the lateral paracanthal incision to avoid complications associated with lateral canthotomy. A paracanthal incision uncouples the lower eyelid through the tarsus leaving the canthal structures intact, which would be easier to access than dividing canthal fibers (10). This modification does not remove the tarsus, that avoids to weakening the lower eyelid support. Another lateral paracanthal modified incision is to decouple the eyelid by severing part of the inferior limb of the lateral canthus (9).

In addition, the denervation of the buccal and zygomatic branches of the facial nerve is also a crucial anatomic factor for retraction, ectropion, and pretarsal flattening due to loss of eyelid muscle tone.

Entropion is due to scar or deficiency of eyelid posterior lamella (conjunctiva and subconjunctiva). Scars contracture of tarsus and conjunctiva lead to eyelid inward bowing. The transconjunctival approach had a significantly higher incidence of entropion than the transcutaneous approach (20) (Figure 3). If transconjunctival incision is made too far anteriorly, approximate to the eyelid edge, fibrosis may contract strongly to shorten the tarsal plate. If the incision is made too far posteriorly, close to capsulopalpebral fascia and globe, there is increasing risk of risk of injuring the inferior oblique muscle (24).

Most studies have confirmed a high rate of entropion in the transconjunctival approach (6,17,20), particularly in the preseptal approach. This incision is closer to the eyelid edge and tarsal plate, that may lead to posterior lamellar scarring. However, one report has compared the complications of preseptal with retroseptal approach, finding no significant difference between both incisions regarding eyelid malposition (25). Therefore, although the transconjunctival approach commonly leads to entropion, it is still recommended due to excellent exposure of the orbital floor, invisible scar, and a relatively lower rate of eyelid complications than transcutaneous approach (26).

Flattening of the eyelid fat

Possible pathogenesis for this asymmetry is fibrosis reinforce from the incision into the eyelid retractors, which reduces herniation and protrusion of fat on the operated side. Additionally, on the normal side, the natural aging process weakens the septum, helping the orbital fat for prolapsing. Another possible reason may be a traumatic injury.

Orbital fat is herniated into the paranasal sinus by injury, and becomes gradually devascularized and cicatricial, finally loss its normal volume. Over time, this fat volume loss will become more evident compared with the fat bulging during natural aging process on the contralateral side.

A study revealed that the lower eyelid laceration and lacrimal canaliculus avulsion in transconjunctival approach happens in 0% to 3.0% of the patients (19,29). Eyelid notch deformity at the site of incision is described in the lateral paracanthal approach (3.1%) (30).

First and foremost, delicate tissue management, technical expertise, and meticulous hemostasis are necessary for preventing eyelid malposition complications. Excessive removal of soft tissues such as skin, muscle or septum fat need be avoided during operation. Important eyelid structures are supposed to have an appropriate anatomical repositioning. Hematoma occurrence could be reduced by using compression dressing and ice packs over the incision. Some preventive measures could be performed during operation, such as a Frost suture of lower eyelid for retraction and scar contracture.

All eyelid malposition complications could be first treated conservatively using taping, lubricating ointment, and steroid. Patients could be advised to massage the lower eyelid everyday postoperatively (for example, 5 minutes each hour) (31). When mild to moderate eyelid malposition still persists after 1-month massage, it is advised to continue for 6 months before surgical intervention. Lower eyelid malposition is reported to be treated with 20 mg/mL triamcinolone acetonide. The steroid is injected along the postoperative scar and strictly limited to the preseptal depth to avoid fat or muscle atrophy. The injection interval could be three weeks or longer, and the number of injections depends on patients’ clinical manifestation (15,32).

Unless significant corneal exposure and ocular irritation occur, early surgery intervention needed to be avoided (17). If conservative treatment fails in persistent or severe ectropion, the etiology of the ectropion should be addressed. Scars should be removed and released, and grafting of the anterior lamella deficiency is essential for vertical shortening from excessive skin and muscle resection (33). Weis technique can be used for mild entropion: a transverse lid split and a block resection of the posterior lamella create a fibrous scar available for upward migration of the pretarsal orbicularis oculi muscle. For severe entropion, Successful reconstruction requires scar excision, release of the posterior lamella contraction, and replacement of tissue deficiency (34,35). Electrolysis of the offending eyelashes is possible for persistent entropion with ocular irritation. Various methods are available to correct postoperative ectropion and eyelid retraction, such as tarsal strip technique (14), lateral canthal tendon tightening, spacer graft (lingual mucosal grafting or material), and midface lifting for lower eyelid retraction (16).

Funding: This work was supported by the National Natural Science Foundation of China (grants 81970834 and 81870688), the Science and Technology Commission of Shanghai Municipality (grants 19441900800).

Provenance and Peer Review: This article was commissioned by the editorial office, Annals of Eye Science for the series “Eyelid Surgery”. The article has undergone external peer review.