In the small incision refractive lenticule extraction (SMILE) procedure, a stromal lenticule is created and removed through a small peripheral incision. Previous studies (1-5) have reported an increase in epithelial thickness after SMILE but studies (1,6) examining stromal thickness changes were few. Luft et al. has observed that the stromal thickness decreased significantly during the first 6 weeks and amounted to a mean of 10.4±6.3 µm at the apex. The central stroma thickened by a mean of 8.8±5.9 µm up until the 1-year follow-up (6). Refractive regression impacts the predictability of SMILE surgery. It is supposed that the epithelial and/or stromal remodeling induced partly to refractive regression after PRK and LASIK (7-9). Changes in epithelial thickness after SMILE have shown to be related with the regression (2).

In the present work, we used spectral-domain optical coherence tomography (SD-OCT) to study epithelial and stromal remodeling of eyes with different refractive diopter throughout 6 months after SMILE. A better understanding of these might help surgeons in accurate treatment planning and further improving the predictability of outcomes.

We present the following article in accordance with the STROBE reporting checklist (available at http://dx.doi.org/10.21037/aes-20-105).

This study was approved by the Institutional Review Board of Tongren Hospital and adhered to the tenets of the Declaration of Helsinki (as revised in 2013). Written informed consent was obtained from all participants.

All procedures were performed by the same experienced ophthalmologist (FZ) using a VisuMax 500-kHz femtosecond laser (Carl Zeiss Meditec AG, Jena, Germany). The intended cap thickness was 120 µm and the diameter of the optical zone was 6.0–6.5 mm. A 2-mm incision was made at the 12 o’clock position. The upper interface was separated and the lower layer was dissected. Once both layers had been separated, the lenticule was removed from the cornea. All patients received one drop of topical ofloxacin 0.3% (Tarivid; Santen Inc., Osaka, Japan) at the end of the procedure, and postoperatively four times a day for 10–14 days. Fluorometholone 0.1% (flumetholon; Santen Inc., Osaka, Japan) was also applied four times a day for 1 week and then tapered over 9 days. Artificial tears were used four times a day for 4 weeks or more (10).

SPSS (version 23.0; SPSS Inc., Chicago, IL, USA) was used for statistical analysis. The normality of all data samples was checked using the Kolmogorov-Smirnov test. A repeated measures ANOVA with Bonferroni correction was used to compare the thickness changes between different times. The difference in the thickness between the two groups was compared using the Student’s t-test. Linear regression analysis was performed. A P value of less than 0.05 was considered significant. 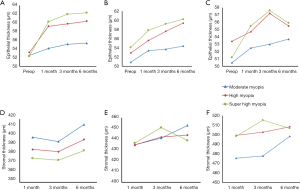 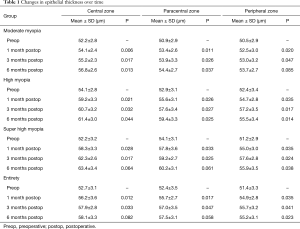 The present study found significant central stromal thickness increased between 1 and 6 months in three groups postoperatively. The finding may agree with Reinstein et al. (4) and Luft et al. (6) studies. Reinstein et al. (4) suggested that the central stroma might expand as a result of tension release of the stromal collagen lamellae disrupted during the creation of the lenticule. We observed continuous thickening in paracentral and peripheral zones until 6 months in moderate and high myopic groups. The stromal thickness decreased significantly in super-high myopia group in paracentral and peripheral zones between 3 and 6 months. The results were inconsistences with the report (6) in which stromal thickness remained stable after 6 weeks in the 1.25 mm and 2.5 mm corneal zone. The keratocyte-mediated wound healing in the laser-cut interface, glycosaminoglycans (GAG’s), fibrin and other extracellular matrix components induced stromal thickening response (11-13). Dong et al. (11) showed keratocytes were transformed into fibroblasts or myofibroblasts and migrated to repopulate the depleted stroma. Subsequently, the remodeling of the extracellular matrix and the stroma was achieved by myofibroblasts. Luft et al. (6) reported central stromal thickness was highest on the first postoperative day (mean 407.2±29.8 µm) and decreased by a mean of 10.4±6.3 µm until the minimum at 6 weeks. The potentially influential factor may be early transient stromal edema which elevated the thickness then normalized.

However, MRSE was not associated with the postoperative central stromal thickening in the present study.

In the current study, observed increases in epithelial and stromal thickness did not lead to any significant refractive change in the moderate and high groups at 6 months. It proved the refractive stability of SMILE for most myopic patients. MRSE only showed significant differences between 3 and 6 months in the super-high myopic group, as observed in both eyes of two patients in previous study (2).

The epithelial thickening was positively correlated with MRSE of myopia, which may indicate that eyes with super-high myopia may have an increased tendency toward epithelial hypertrophy. Our study found significant central stromal thickness increased between 1 and 6 months in three groups postoperatively. Luft et al. (6) have demonstrated the central stromal expansion observed between 6 weeks and 1 year coincided with a mild (nonsignificant) myopic regression. So, the hypothesis in this study put forward that epithelial hypertrophy and stromal remodeling might lead to potential chances of refractive regression of super-high myopic group after SMILE. These results suggested that properly prolonged steroid eyedrops management may decrease the epithelial and stromal thickening resulting in super-high myopic regression.

The limitations need to be considered. The epithelial thickness changes within the 6.0–6.5 mm corneal zone should be evaluated. Moreover, some deviation may have been caused by incorporating the tear film thickness into the epithelial thickness measurement. Furthermore, a relatively short follow-up period of 6 months was not long enough to conclude that cornea stopped remodeling completely. Additional studies are required to confirm our findings.

To conclude, this study demonstrated a wide epithelial and stromal remodeling profile after SMILE, which is correlated to different refraction. The corneal epithelial and stromal thickness increases that did not affect the refractive stability were observed during the 6-month follow-up period. A further research in super-high myopia is advocated to elucidate potential effects of corneal remodeling on refractive outcomes.

Reporting Checklist: The authors have completed the STROBE reporting checklist. Available at http://dx.doi.org/10.21037/aes-20-105

Conflicts of Interest: All authors have completed the ICMJE uniform disclosure form (available at http://dx.doi.org/10.21037/aes-20-105). The series “Ophthalmology Clinical Research” was commissioned by the editorial office without any funding or sponsorship. The authors have no other conflicts of interest to declare.

Ethical Statement: The authors are accountable for all aspects of the work in ensuring that questions related to the accuracy or integrity of any part of the work are appropriately investigated and resolved. This study was approved by the Institutional Review Board of Tongren Hospital (IRB: R/17.05.119) and adhered to the tenets of the Declaration of Helsinki (as revised in 2013). Written informed consent was obtained from all participants.