Association between the M98K variant of the OPTN gene and the risk for primary open angle glaucoma: an updated meta-analysis

Primary open angle glaucoma (POAG), characterized by progressive neurodegeneration of retinal ganglion cells (RGCs) and their axons, is the leading cause of irreversible blindness worldwide (1). It is a heritable disease with the evidence from twin studies and familial clustering studies (2,3). There is a significant progress in the genetic basis of POAG. About 5% of POAG is known as a Mendedian disease and caused by a single gene (4). Others are attributed to multiple genetic and environmental risk factors.

Optineurin (OPTN) is one of disease-causing genes of POAG, which is firstly investigated in a large British family with normal tension glaucoma (NTG) (5,6). Four mutations, Glu50→Lys (E50K), Arg545→Gln (R545Q), c.691_692insAG (Premature stop) and Met98→Lys (M98K), were identified in the original kindred (6). The rare, high-penetrance mutation, E50K, is the clearest disease-causing OPTN mutation for POAG (7). Glaucoma patients who had the E50K mutation were reported to have a younger age of onset, more advanced optic disc cupping, smaller neuroretinal rim area and higher rate of filtration surgery required (7). Among the above OPTN mutations, only M98K variant was present in normal controls (9/422), although the frequency was statistically lower than that in POAG patients (6). Multiple subsequent studies of different ethnicities were performed to evaluate the association between the risk allele (M98K) in the causative POAG gene (OPTN) and the risk of POAG, which produce conflicting results. Although three meta-analysis studies (8-10) have tried to clarify this association, the most recent meta-analysis included only 5 studies and new association studies were published after the other two meta-analyses published in 2006 (8) and 2010 (9). Importantly, the results among these meta-analyses differs, which makes an updated in depth analysis on this topic imperative to reach a definitive conclusion. We present the following article in accordance with the PRISMA reporting checklist (available at http://dx.doi.org/10.21037/aes-20-124).

In this study, we searched the PubMed, Embase, Web of Science, and China National Knowledge Infrastructure (CNKI) databases to find all articles describing the relationships between the M98K variant and POAG, which were published from the inception to 31 December, 2019. The following search terms were used as a text word: “Optineurin or OPTN or M98K or Met98Lys” and “primary open angle glaucoma or open angle glaucoma or POAG or normal pressure glaucoma or low tension glaucoma or normal tension glaucoma or high tension glaucoma”. The detailed search strategy was provided as Appendix 1. The language was restricted to English and Chinese. Two independent reviewers (C.G. and X.Y.) screened the titles and abstracts of all relevant articles, manually examined the reference lists and relevant reviews for additional publications, and evaluated the full texts to identify eligible studies.

Included studies were case-control studies in assessing the associations between OPTN (M98K) mutation and the risk of POAG and its subgroups, the age and intraocular pressure (IOP) at diagnosis in POAG patients. Studies without available data, case-only studies, reviews, conference abstracts or family-based studies were excluded. If more than one population with available data were included in a single study, each population was regarded as separate data in the analyses. We included the most comprehensive study when duplicate sequencing data existed in multiple studies.

The Newcastle-Ottawa Scale (NOS) was used to assess the quality of each case-control study with its ‘star system’ by two reviewers (C.G. and X.Y.), which is judged on three broad perspectives: the selection of the study groups; the comparability of the groups; and the ascertainment of either the exposure or outcome of interest for case-control studies respectively (11). The disagreement between the two reviewers was solved by a senior reviewer (Z.F.).

Meta-analysis was conducted using Comprehensive Meta-Analysis software version 2.2.064 (Biostat Inc., NJ, USA). The statistical significance of the pooled odds ratio (OR) and 95% confidence interval (CI) was determined by Z-test. To reduce the type I error, the Bonferroni correction was used to determine the statistically significant genetic models. Because multiple comparisons were performed 35 times, the P value less than 0.05/35 (0.0014) was considered as statistical significance after Bonferroni correction. The heterogeneity across studies was assessed and qualified by the I2 index, with I2 of greater than 50% considered as large or extreme heterogeneity (12). Additionally, a Q-statistic test was performed. All meta-analyses and subgroup analyses were performed by the random-effects model. The contour-enhanced funnel plot with trim-and-fill method and Egger’s tests were used to assess the potential publication bias. The Power and Sample Size Calculation software (13) was used to assess the expected statistical power of our meta-analysis in detecting the association between M98K and risk of POAG at a level of significance of 0.0014.

A total of 1,218 records were identified, yielding 767 studies after removal of duplicates. Following screening, 719 publications were excluded based on the title and abstract, and 48 full text articles were assessed for eligibility. After excluding 9 studies without data on M98K and 5 studies with duplicate data, a total of 34 publications including 39 populations with available data were included in the final analyses. Ayala-Hugo et al. (14) reported 4 populations, including Asian, African, Hispanic, and Caucasian subjects; Alward et al. (15) reported 2 populations, including Caucasian (Iowa and Australia) and Japanese samples; Melki et al. (16) reported 2 populations, including French and Moroccan. The flow chart of literature selection was shown in Figure 1. A total of 7,310 POAG patients and 5,173 controls were involved. The characteristics of subjects were summarized in Table 1. According to the NOS, our included studies achieved an average of 6.21 stars for quality assessment (Table 2, Figure 2). 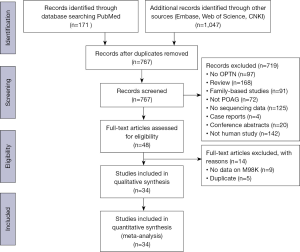 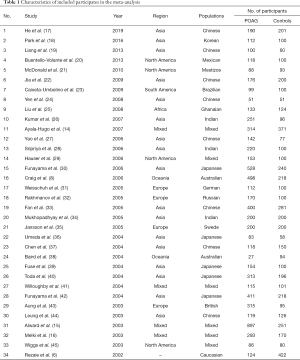 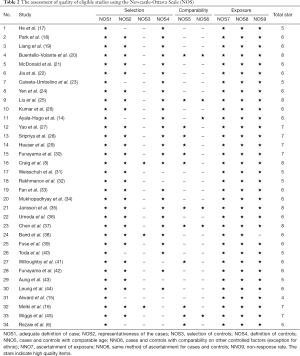 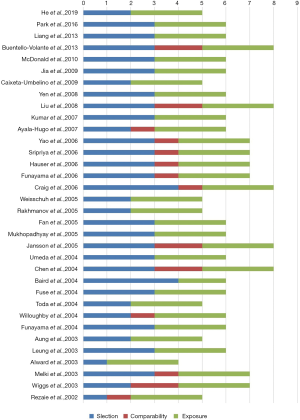 In the analyses of association between M98K and risk of each POAG subgroup, including NTG, HTG, Asian POAG, non-Asian POAG, JOAG, and adult-onset POAG, under the multiple genetic models, we performed the Bonferroni correction to reduce the type I error (Table 3). 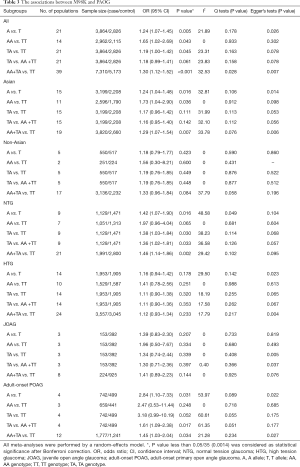 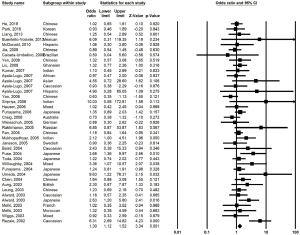 Figure 3 Forest plot of the association between M98K mutation and primary open angle glaucoma susceptibility under the dominant model.

Association between M98K and IOP/age at diagnosis in POAG patients

For the significant association in our study (Table 3), the Egger tests suggested statistically significant publication biases existed in the associations between M98K and overall POAG risk under the dominant model (P=0.007).

The counter-enhanced funnel plot with trim-and-fill method was used to assess the influence of publication bias in the pooled effects (Figure 4). The association between M98K and overall POAG risk under the dominant model (OR: 1.22, 95% CI, 1.02–1.46; P=0.029) was still statistically significant after adding 6 studies. 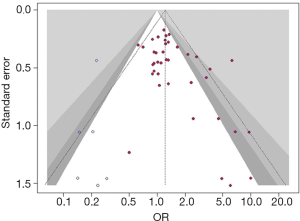 Figure 4 Assessment of the influence of publication bias in overall primary open angle glaucoma group under the dominant model by the counter-enhanced funnel plot with trim-and-fill method.

This is an updated meta-analysis to investigate the association between M98K polymorphism and risk for POAG. Our results indicate that M98K increases risks of overall POAG under the dominant model.

The three reported meta-analyses on the M98K in the risk of POAG had controversial results, with positive associations by Chen et al. (10) and Craig et al. (8) while negative association by Cheng et al. (9). The difference in included populations may explain this inconsistency. The latest meta-analysis only included 5 studies (10), and the other two published in 2010 (9) and 2006 (8) included 23 and 19 studies respectively. In this comprehensive study, a total of 34 publications including 39 populations were included, which made us possible to make a more definitive conclusion.

Being in accordance with the dominant inherited mode of OPTN in the POAG pedigree (5,6), M98K was found to be positively associated with overall POAG under the dominant model. Hubens et al. (46) recently reported that OPTN was intensively expressed in the retina, including RGCs, in the healthy mouse eyes. There is some evidence that OPTN might play a neuro-protective role by reducing RGCs susceptibility to apoptosis through negatively regulating TNF-α-induced NF-κB activation (47,48). The M98K, evolutionarily conservative in various species (Figure 5), was reported to induce cell death when expressed in RGC-5 (49) and 661W (50) cells, which may indicate the M98K could directly induce the death of RGCs. In this study, we found that the M98K is associate with NTG at a nominal level of significance, but not with HTG patients, in which the myocilin (MYOC) mutations may be the common causes. Besides, the age at diagnosis showed no significant association with M98K mutation in POAG patients, the mean age at diagnosis was 61.07 (95% CI, 57.00–65.14) years in POAG patients with M98K pooled from 4 studies (8,32,36,42).

Some concerns remain in this study, though. Firstly, the effects estimated here were modest although several significant associations were observed, suggesting the possible mild role of this risk allele in POAG patients. Secondly, since publication bias existed, we performed trim-and-fill method to evaluate the influence of these biases. As a result, the association remained statistical significant, although the association should be further studied with a large sample size. Thirdly, only articles published in English and Chinese were included, which may cause language bias.

In summary, our updated meta-analysis provided the most comprehensive role of M98K in the susceptibility of POAG patients. This common variant, M98K, could contribute to POAG susceptibility.

Reporting Checklist: The authors have completed the PRISMA reporting checklist. Available at http://dx.doi.org/10.21037/aes-20-124

Conflicts of Interest: All authors have completed the ICMJE uniform disclosure form (available at http://dx.doi.org/10.21037/aes-20-124). The authors have no conflicts of interest to declare.