Novel mitochondrial therapies for the treatment of age-related macular degeneration

Age-related macular degeneration (AMD) affects over 8% of the global population and is a leading cause of vision loss worldwide in older patients (1). Risk factors for AMD include age, smoking and genetics, but the pathogenesis of the disease is multifactorial. Oxidative stress (OS), inflammatory processes, and genetic susceptibility all factor into AMD progression. AMD can be divided into two major categories: non-exudative and exudative. Non-exudative AMD is characterized by progressive vision impairment and drusen deposits between Bruch’s membrane and the retinal pigment epithelium (RPE). The three stages of AMD are classified by the Beckman committee as early, intermediate, and late or advanced. Each stage is defined by the amount and size of drusen deposits as well as the presence of geographic atrophy (GA). Exudative AMD is a less common form of the disease, in which choroidal blood vessels invade the RPE through Bruch’s membrane. Those new, fragile vessels are prone to cause fluid exudation or to breakage, with subsequent hemorrhage, leading to a sudden visual acuity reduction (1).

The retina’s high metabolic rate leads to elevated levels of reactive oxidative species (ROS) from the mitochondrial electron transport chain (ETC) and causes oxidative damage to mitochondrial DNA (mtDNA) within the RPE. Light toxicity also increases ROS production in the RPE due to mitochondrial aging. These molecules induce structural and functional changes in surrounding cellular structures, including mtDNA (2). This is relevant as studies have shown a correlation between the increase of mtDNA damage and AMD occurrence due to the RPE’s susceptibility to oxidative DNA damage (3,4). Terluk et al. found that mtDNA damage and mutations in AMD patients tended to localize in the RPE, indicating it as a promising target for mitochondrial therapies (5). Rodent models have shown decreased levels of mtDNA repair enzymes in the RPE and choroid, which further supports the role of mtDNA damage in AMD. Lin et al. confirmed the correlation between mtDNA damage and AMD stage. They showed a negative correlation between the efficacy of mtDNA repair after induction of OS and AMD stage (6). Focusing on mtDNA repair pathway components could be a promising avenue for determining effective therapeutic targets to prevent AMD progression.

Proteins that contain flavins have also proven to be effective biomarkers when studying mitochondrial dysregulation. ETC activation, as discussed earlier, leads to the generation of more ROS, which oxidize flavoproteins that function in that system and cause them to fluoresce. Field et al. studied this in diabetic eyes by inducing metabolic stress. They found that flavoprotein autofluorescence (FA) measures were representative of retinal damage and could be used as a marker for retinal disease progression. The study showed significantly increased levels of flavoprotein fluorescence (FPF) in patients with AMD, and these fluorescence levels increased as the disease progressed (8). A study by Chen et al. further confirmed the ability of using FPF to measure stages of retinal diseases (9). As such, FPF could also be used as a tool to determine effects of AMD therapies.

This review will focus on available therapies that target specific aspects of mitochondrial dysregulation to prevent AMD progression. Additionally, it will consider how that change can be measured using novel mitochondrial biomarkers.

Current studies and therapies focus on targeting mitochondrial dysregulation and increased OS. NFE2L2 and PGC-1α are two proteins involved in antioxidant pathways that can be targeted to counteract natural ROS production over time (Figure 1). 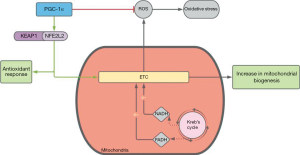 Nuclear factor erythroid 2-related factor (NFE2L2 or NRF2) is a protein associated with the outer mitochondrial membrane to protect the organelle from oxidant injury. It functions in the Kelch-like ECH-associated protein 1-NFE2L2 (KEAP1-NFE2L2) pathway. KEAP1 is inactivated in response to OS, releasing NFE2L2, which mediates gene transcription of antioxidant proteins (10). Knockout rodent models of NFE2L2 have been established to show accumulated deposits, increased RPE degeneration, as well as a decline in visual acuity, indicating an active role in the prevention of AMD (11).

Similarly, PGC-1α functions by stimulating detoxifying responses to OS in the inner retina by upregulating genes that prevent mitochondrial apoptosis. It also plays a major role in mitochondrial biogenesis. PU-91 is an FDA approved drug for the treatment of dyslipidemia that functions to activate this protein, and its upregulation has shown to increase mtDNA copy numbers in AMD cybrid cell lines. Nashine et al. in 2019 used a transmitochondrial cell model to measure its ability to protect RPE cells and found that it has the ability to rescue cells from apoptotic death and stabilize mitochondrial health. This study also showed that PU-91 can improve mitochondrial membrane potential, which prevents mitochondrial depolarization and subsequent collapse of the membrane potential, thereby preventing apoptosis as well (12). This study suggested PU-91 as a potential drug for AMD therapy, however further studies are needed to concretely establish its role in human eyes.

Sridevi Gurubaran et al. focused specifically on the mechanisms of both NFE2L2 and PGC-1α in rodent models. Mitochondrial damage after OS leads to mitophagy, a process regulated by PTEN-induced kinase 1 (PINK1) and the gene PARKIN. The retina has high levels of mitochondria, so mitophagy would severely impact its function and energy output. The localization of PINK1/PARKIN on the outer mitochondrial membrane allows for formation of the autophagosome, a structure crucial for intracellular organelle degradation. Researchers created a double knockout (dKO) NFE2L2/PGC-1α mice model to measure its effect on mitophagy and found significantly increased levels of PINK1/PARKIN compared to normal mice by measuring auto fluorescent protein aggregate components (13). While further research needs to be conducted to determine specific effects of the dKO model on mitophagy, it supports the potential of NFE2L2 and PGC-1α as therapeutic targets for AMD.

Although these molecules are in early stages of testing with relevance to AMD and show promise, other therapeutics have emerged and are better studied.

MTP 131, more commonly known as elamipretide®, is a peptide that functions by localizing to the inner mitochondrial membrane and associating with cardiolipin (CL). CL is a multifunctional protein that plays roles in mediating mitochondrial biogenesis, mitochondrial dynamics, and forming ETC complexes (14). However, due to its direct role in these processes, it is also subject to attack by ROS, which inhibits its function. This causes changes in lipid structure in the inner mitochondrial membrane, directly affecting the ETC since CL is also essential for the function of complexes I and IV. Damage to those complexes significantly increases ROS production and consequentially the risk of mitochondrial damage (15). By associating with CL, MTP 131 prevents mitochondrial malfunction and damage from the cytotoxic effects of ROS.

In April 2016, MTP 131 was tested in patients with primary mitochondrial myopathy (PMM), a group of disorders that affects organs with high metabolic demand such as the retina (16). MMPOWER were phase I, II, and III clinical trials conducted to test the effects of subcutaneous MTP 131 injections on PMM patients. Participants were given increasing doses of the drug subcutaneously for 5 consecutive days. Phase I and II patients showed significant improvements in their primary outcome measure, the change in distance travelled during a 6-minute walk test after 5 days of treatment. Phase III of the trial was planned to continue for 144 weeks but terminated because initial findings of the trial did not reach its predicted endpoint. While there were no adverse effects of the drug, participants did not perform significantly better on the walk test compared to the placebo group. It is important to note that while phase III of this trial was unsuccessful, walking distance is not an accurate measurement when it comes to determining effect on retinal function.

ReCLAIM is a clinical trial testing the effect of daily, subcutaneous injections of 40 mg MTP 131 on patients with any stage of AMD. Phase I results for patients with non-exudative AMD and noncentral GA (NCGA) showed an improvement in low-luminance visual acuity (LLVA) as well as a mean change of NCGA area of approximately 0.13 mm (17). Patients with quiescent exudative AMD showed significant LLVA gain, with 54% of eyes gaining over 6 best-corrected visual acuity (BCVA) letters and 31% gaining over 10 BCVA letters (18). The company is currently in the process of recruiting for phase II (NCT03891875). Participants will receive a 40-mg subcutaneous injection of the drug daily for 48 weeks and be observed primarily for improvements in low-luminance BCVA. Secondary outcomes include the change in GA area measured by fundus autofluorescence as well as optical coherence tomography (OCT) imaging.

Metformin stimulates adenosine-monophosphate protein kinase (AMPK), a protein essential in managing cellular energy levels. This medication is commonly used to assist type II diabetic patients in managing their blood glucose levels. Interestingly, AMPK protein goes on to activate PGC-1α, which as discussed above, actively stimulates detoxifying responses in the retina. A retrospective case-control study performed in 2019 studied the effects of metformin on AMD development and established a protective effect of the drug against the disease (19). A phase II clinical trial (NCT02684578) is studying the effects of metformin on patients with advanced non-exudative AMD and NCGA. In this phase, participants will receive increasing doses of metformin over the course of 18 months and be observed primarily for the rate of change in GA and drusen growth.

There are several potential therapies for AMD treatment in various stages of testing. Molecular mechanisms of AMD indicate potential therapeutic targets for the disease, and the role of NFE2L2 and PGC-1α in preventing mitophagy make them promising targets for future development. Drugs with mitochondrial activity used for other diseases show promise for the treatment of AMD, such as MTP 131 and metformin. Further research into mitochondrial pathways and the organelle’s role in AMD pathogenesis could bring new targets to light and offer new avenues for drug development in the future.

Provenance and Peer Review: This article was commissioned by the Guest Editor (Sayena Jabbehdari) for the series “Novel Treatment in Age-related Macular Degeneration” published in Annals of Eye Science. The article has undergone external peer review.

Conflicts of Interest: All authors have completed the ICMJE uniform disclosure form (available at http://dx.doi.org/10.21037/aes-21-7). The series “Novel Treatment in Age-related Macular Degeneration” was commissioned by the editorial office without any funding or sponsorship. The authors have no other conflicts of interest to declare.

Ethical Statement: The authors are accountable for all portions of the manuscript and ensure that questions related to the accuracy and integrity of any part of the work are appropriately investigated and resolved.