Retrospective review of patients, who underwent lower eyelid basal cell carcinoma excision with total loss of lower eyelid tissue, was conducted. Eyelid reconstruction was performed as described below, under local anaesthesia (Figure 1). A full thickness skin flap is raised from the lateral cheek, with its base at the lateral canthus. Subcutaneous tissues are not included in the skin flap. The length of the flap is measured, to ensure that it will fill the horizontal defect of the lower eyelid. For larger defects extending onto the cheek, a larger width skin flap is fashioned to fill the defect. The width of the flap is kept at 4mm or more to mimic the natural height of the lower eyelid in patients where the excision had resulted in loss of eyelid tissue only. The lower forniceal conjunctiva is released from the inferior retractors and advanced superiorly to cover the inner surface of the skin flap. The skin flap is transposed to cover the lower eyelid defect and sutured to the soft tissues at the medial end of the defect. The advanced forniceal conjunctiva is sutured to the superior edge of the skin flap with 6/0 Vicryl, forming the new mucocutaneous junction of the eyelid margin. A bandage contact lens is placed on the cornea as a precaution and is removed 3 days post-operatively. 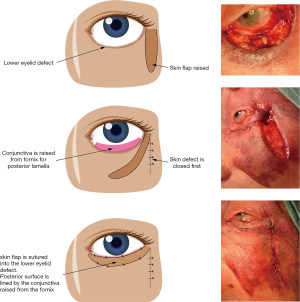 The study conformed to the provisions of the Declaration of Helsinki (as revised in 2013). Written informed consent was obtained from all patients. Ethical approval was not required because this was a retrospective review and was performed as part of our organisational audit requirements. All procedures performed in studies involving human participants were in accordance with the ethical standards of the institutional and/or national research committee(s).

Five patients underwent lower eyelid basal cell carcinoma excision with total loss of lower eyelid tissue. There were 4 females and 1 male, with a mean age of 74 years (range, 68–80 years). Histological clearance was achieved in all cases. Mean follow up was 28 months (range, 15–44 months). None of the patients developed lagophthalmos, symblepharon or dry eye symptoms. None of the patients required any further revision surgery.

Another patient with ill-defined basal cell carcinoma involving the right lower eyelid (Figure 2D). There was near total lower eyelid defect after Mohs micrographic surgery (Figure 2E). This was reconstructed (Figure 1) and this photo illustrates the reconstructed eyelid at 1 year follow-up (Figure 2F).

Large lower eyelid defects with loss of greater than 50% of eyelid tissue are usually repaired using tarso-conjunctival flap (Hughes flap) (1) or a modification of this flap. Auricular cartilage or hard palate grafts have also been used as a substitute for the tarsus. The advantage of our technique is that it avoids tissue recruitment (from eyelids, ear or hard palate) and is a one stage procedure (unlike a Hughes flap). In addition, none of the patients developed eyelid margin erythema post-operatively, which is a relatively common occurrence following Hughes procedure. Skippen and colleagues reported a similar technique, where they used full thickness skin graft for the anterior lamella reconstruction and advanced the forniceal conjunctiva for the posterior lamella repair (2). In our technique, we employ a skin flap instead of a skin graft. The skin flap is anchored at the lateral canthus to provide an upward vector and also has its own blood supply.

The drawback of not substituting the lost tarsal plate is that there can be increased inferior scleral show, due to lack of firm middle lamella support, as was seen in 2 of our patients (Figure 2F). Patients should be informed of the possibility of increased inferior scleral show. This technique cannot be performed when there is insufficient residual forniceal conjunctiva to provide coverage for the entire posterior lamella. All patients in this case series were satisfied with the surgical outcome and none required further surgical intervention (Figure 2C,F).

Conflicts of Interest: Both authors have completed the ICMJE uniform disclosure form (available at http://dx.doi.org/10.21037/aes-21-2). The authors have no conflicts of interest to declare.

Ethical Statement: The authors are accountable for all aspects of the work in ensuring that questions related to the accuracy or integrity of any part of the work are appropriately investigated and resolved. All procedures performed in studies involving human participants were in accordance with the ethical standards of the institutional and/or national research committee(s) and with the Helsinki Declaration (as revised in 2013). Written informed consent was obtained from the patient. Ethical approval was not required because this was a retrospective review and was performed as part of our organisational audit requirements.