Red eye is common in our daily practice. It ranges from non-inflammatory to inflammatory causes. Non-inflammatory such as subconjunctival hemorrhage, pannus etc. Inflammatory causes such as orbital cellulitis, dacryoadenitis, keratitis, scleritis, uveitis etc. (Table 1). As such, we present a case of a prolonged conjunctivitis mimicking nodular episcleritis, which is one of the possible presentations of granulomatosis with polyangiitis (GPA), in accordance with the CARE reporting checklist (available at https://aes.amegroups.com/article/view/10.21037/aes-21-32/rc).

A 57-year-old woman presented with two weeks duration of discomfort, with generalized conjunctival redness and tearing in both eyes. She did not have any constitutional symptoms, rash or any systemic associations. She was a housewife and did not have any medical illnesses or allergies. She was treated for simple conjunctivitis with guttae chloramphenicol 0.5% four times a day for three weeks. Despite the symptomatic relief, the redness persisted. She was commenced on guttae olopatadine hydrochloride 0.2% once daily for two weeks. In the subsequent reviews, both eyes showed segmental redness on the superior bulbar conjunctiva (Figure 1A) which was partially blanched with phenylephrine 1%. She was started on guttae nepafenac 0.1% three times a day and oral celecoxib 200 mg twice a day. Two weeks later, she developed peripheral ulcerative keratitis (PUK) on both eyes. Her physical examination showed injected uvula (Figure 1B) with absence of upper respiratory tract infection. She was admitted for blood and imaging investigations. Her inflammatory markers were raised: ESR was 49 mm/Hr (normal <29) and CRP 13.65 mg/dL (normal <0.3), Antinuclear antibody and C-ANCA tests were positive. The immunology study of her proteinase 3 (PR3) was also positive. All other investigations such as renal profiles, urine full examination microscopic examination (UFEME), CT brain/orbit and chest X-ray were normal. She was diagnosed with GPA and commenced on three days of intensive intravenous methylprednisolone 750 mg once daily and followed by tapering dose of oral prednisolone 1 mg/kg/day. Microscopic polyangiitis was unlikely as her P-ANCA was negative. Giant cell arteritis was ruled out too as she did not have headache or temporal tenderness. In her hospital admission, she developed a vasculitic lesion with cutaneous abscess at the site of intravenous cannula insertion (Figure 1C). Our rheumatology team thereafter commenced on long-term oral methotrexate 10 mg once a week with folic acid 5 mg supplementation. On the subsequent visits, she showed good response to treatment with tapering regime of oral prednisolone. The conjunctiva and sclera remained white, and the areas of cornea thinning scarred up (Figure 1D). Her intraocular pressure, which was raised as a sequelae of corticosteroid, was well controlled with guttae timolol 0.5% twice a day. She was scheduled for regular follow-ups with her antiglaucoma and non-preserved artificial tears. The timeline of events was shown in Figure 2. All procedures performed in this study were in accordance with the ethical standards of the institutional and/or national research committee(s) and with the Helsinki Declaration (as revised in 2013), Written informed consent was obtained from the patient for publication of this case report and accompanying images. A copy of the written consent is available for review by the editorial office of this journal. 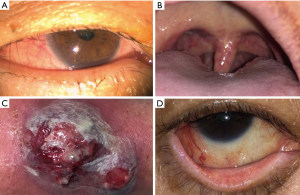 Figure 1 Ocular and systemic findings of patient. (A) Conjunctival ciliary injection on presentation; (B) vasculitic changes on the uvula; (C) cutaneous abscess with vasculitis at the site of intravenous cannula insertion of the left arm; (D) resolution of conjunctival redness at 14th day of systemic corticosteroid.

Figure 2 Timeline of events shows the presentation of signs to its resolution with the treatment commenced.

There are many causes of red eye which associated with systemic disease, ranging from life-threatening to idiopathic. In a patient over 50 years old with raised ESR and vasculitis, giant cell arteritis is a possible cause. However, the lack of headache and temporal tenderness has reduced its possibility. In small vessels vasculitis, microscopic polyangiitis is a differential. However, her immunology results of positive C-ANCA and PR3 has showed a higher probability of GPA (11,12).

GPA or Wegener’s Granulomatosis can be found worldwide. The incidence and prevalence of the disease in Asia is not known. In Japan, it was estimated to be 2.1/million population (13). In Taiwan, Wu et al. estimated 0.37/million based on the National Health Insurance database (14). Cases of GPA have been reported in Malaysia, with involvement in oral cavity (15) and ocular (16). A unilateral eye redness presentation was also reported (17).

GPA is an autoimmune condition of unknown etiology which is characterized by the classic triad of necrotizing granulomatous vasculitis of the respiratory tract, focal segmental glomerulonephritis, and necrotizing vasculitis of small arteries and veins. It has a spectrum of presentation which include nonspecific constitutional symptoms, to ophthalmic, ear-nose-throat, pulmonary, musculoskeletal, renal, nervous system, cutaneous, cardiac and lastly gastrointestinal manifestations (18). Ocular involvement is reported ranging from 28% to 60%, commonly with scleritis. In orbital involvement, it was reported up to 10%, with involvement of orbital cellulitis, dacryocystitis, orbital pseudotumour or involvement of the paranasal sinuses extension, into the orbit (19). Scleritis of the necrotizing type is the most common ocular manifestation (20).

Treatment of the disease requires high doses of corticosteroid. The side effects of the treatment could lead to other complication such as electrolyte imbalance, uncontrolled blood pressure and blood sugar, acute psychosis and long-term side effects such as ocularly glaucoma, cataract, systemically osteoporosis, central abdominal obesity etc. Our reported patient has no co-morbid. The treatment plan is tolerable without adverse event, and she recovers well.

Our case shows a well-documented presentation of GPA: from a simple conjunctivitis to development of PUK and diagnosis of GPA. The subtle evolvement of the early presentation masked the possible underlying connective tissue disease. If resources allowed, it would be favorable for earlier investigation. Success in detecting early subtle systemic signs has succeeded in commencement of treatment, halting the progress of PUK and thus reducing ocular morbidity.

Presentation with red eye is frequent in our daily practice. However, a prolonged duration with incomplete resolution should prompt for suspicion. Diagnosis of GPA is not uncommon. Further investigation is required as the impact of GPA is detrimental, especially with the systemic involvement of the disease.

Reporting Checklist: The authors have completed the CARE reporting checklist. Available at https://aes.amegroups.com/article/view/10.21037/aes-21-32/rc

Conflicts of Interest: Both authors have completed the ICMJE uniform disclosure form (available at https://aes.amegroups.com/article/view/10.21037/aes-21-32/coif). The authors have no conflicts of interest to declare.

Ethical Statement:The authors are accountable for all aspects of the work in ensuring that questions related to the accuracy or integrity of any part of the work are appropriately investigated and resolved. All procedures performed in this study were in accordance with the ethical standards of the institutional and/or national research committee(s) and with the Helsinki Declaration (as revised in 2013), Written informed consent was obtained from the patient for publication of this case report and accompanying images. A copy of the written consent is available for review by the editorial office of this journal.