In vitro models of retinal diseases

Accumulating evidence has progressively highlighted the essential functions of glial cells, which can no longer be thought of as the “silent supporters” of neurons. Within the vertebrate retina, which is responsible for visual perception, Müller cells are the principal glial cells. These cells are radially organized across the entire retinal thickness as originally shown by Cajal through Golgi staining in 1892. This localization is designed for them to play major supporting roles: indeed, these glial cells constitute an anatomo-functional connection between retinal neurons and blood vessels, vitreous body, and subretinal space (1). Müller cells are deeply involved in the generation of the electroretinogram, highlighting their significant role in both retinal physiological and pathological responses. In addition, they are the major producer of retinal vascular endothelial growth factor (VEGF), providing a crucial contribution to retinal angiogenesis during physiological development but also exacerbating pathological neovascularization (2).

In vitro model systems including Müller primary cultures as well as immortalized cell lines, have been developed; these systems represent useful tools to investigate the physiological and pathological events that occur within the retina under different stress conditions.

Limb et al. described for the first time the isolation protocol of Müller cells from human retina, and they called this spontaneously immortalized cell line MIO-M1 (3). Nowadays, MIO-M1 are widely used to investigate the role of Müller cells in retinal diseases. For example, their response to hyperoxic or hypoxic exposure (when they are cultured in high or low oxygen tension, respectively), can give insights into their involvement in retinopathy of prematurity (ROP). Furthermore, it can be intriguing to analyze MIO-M1 response following stress conditions, as the case of oxidative stress (OS) (when they are cultured with H2O2) or pathological neovascularization (when they are cultured with VEGF). Below, we describe how to manage MIO-M1 cell lines and how to realize the previous mentioned experimental conditions.

MIO-M1 cells grow at 37 ℃, 5% CO2 in humified conditions. The cells must be seeded in flasks T75 (Sartstedt, Nümbrecht, Germany, catalog number: 83.3911.002) or petri dishes (Sartstedt, catalog number: 83.3902) and maintained until they reach a subconfluent density. When cell density is about 75%, MIO M1 can be expanded or frozen, according to canonical cell culture protocols. In Table 1, MIO-M1cell number at confluence are reported.

Hyperoxic condition should be performed at 75% oxygen and 5% CO2. Normoxic condition (atmospheric oxygen tension and 5% CO2) is used as a control. Experiments in hyperoxia should be performed following a time course, e.g., 24/48/72 h. At least three independent experiments for each condition (normoxia and hyperoxia) must be used to perform statistical analysis. The suggested cells seeding density is reported in Table 2.

MIO-M1 cells number we suggest seeding in TC 100 or 60 mm Petri dishes for each point of the time course experiments. MIO-M1, Moorfields/Institute of Ophtalmology-Müller 1.

After 24/48/72 h proceed with subsequent analyses.

After 24/48/72 h proceed with subsequent analyses.

H2O2 is commonly used to induce OS on cultured cells. It has been demonstrated that MIO-M1 cells proliferation/viability and morphology remain unaltered at H2O2 concentration of 100, 200 or 400 µM, while higher concentrations result in dramatic loss of cell viability and alter morphology (4).

Seed MIO-M1 cells onto 10 mm plates. Detach the cells with Trypsin-EDTA, fix and stain them in propidium iodide solution, according to the protocol described in reference (6).

(I) ROS determination with the Fluorescent Probe 2’,7’-Dichlorofluorescin diacetate (DCF)

MIO-M1 cells can be characterized through immunocytochemistry using the Glutamine Synthetase (GS) as a specific marker for Müller cells (8). In addition, a widely used target to examine pathological-like general responses of these cells following stress is the Glial Fibrillary Acidic Protein (GFAP). GFAP is a cytoskeletal protein used as a marker of reactive gliosis, and abundantly expressed in Müller cells under stress conditions (9). Below, we describe the protocol to perform immunocytochemistry analysis of MIO-M1 cells: 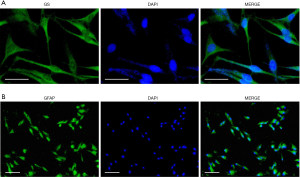 Primary cultures are widely used to investigate the molecular pathways involved in both physiological and pathological conditions, while maintaining the functional properties the cells showed within the organ they come from. Moreover, primary cultures allow us to evaluate the direct effects on cells of either synthetic or natural compounds to be used as drugs in therapy. Particularly, isolation of primary Müller cells offers the invaluable possibility to analyze status and responses of the major retinal glia lineage within diseased retinas. For example, it is possible to isolate Müller cells from diabetic animals, OIR mice, retinal degeneration 10 (RD10) mice, glaucoma rat models and so on. Here, we report the protocol to isolate primary Müller cells from the mouse retina according to (10):

Once isolated, Müller cells can be roughly recognised based on their typical bipolar morphology: they show two main cellular processes, both arising from the central soma (Figure 2). In vivo, their inner process forms an endfoot at the inner limiting membrane which borders the retina to the vitreous humour; instead, their outer process forms close contacts to the photoreceptors (11).

Once isolated, primary Müller cells can be identified using GS which is expressed throughout their length (8). Below, we report the immunocytochemistry protocol to perform GS staining on isolated Müller cells, according to (12): 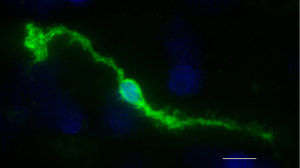 Müller cells are deeply involved in controlling osmotic and ionic homeostasis of retinal extracellular environment. To this purpose, they express a variety of ion channels including the glial Inwardly Rectifying K+ (Kir) channels. Kir channels have a high opening likelihood and, thus, a large macroscopic conductance at the resting membrane potential. These channels are open in resting Müller glia and play an important role in the spatial buffering of potassium ions and in retinal osmoregulation (13). Kir 4.1 is the main responsible for the negative resting membrane potential (approximately −80 mV), which is near to the equilibrium potential of K+ ions (14). Several homeostatic functions of Müller cells, as potassium buffering itself and neurotransmitter uptake, depend on this negative membrane potential (1). Müller cells are known to show altered membrane properties in many pathological conditions; whole-cell patch technique is a worthwhile tool to analyze these possible changes in primary Müller cells derived either from diseased animals or treated ones (15). In fact, electrophysiological studies on the retina, particularly on Müller cells, were firstly performed by recording the electroretinogram (ERG) or by using intracellular electrodes or K+-selective electrodes; these methods only allowed to draw indirect conclusion about Müller cells physiology, for example by observing alterations in the ERG following blockage of glial K+ conductance. Instead, whole-cell patch clamp technique enables a more specific investigation of the functionality of channels and receptors on individual cells. This technique was used for investigating Müller cell functions involving electrophysiological properties in different vertebrate species (9). Importantly, whole-cell patch clamp technique can be used to record current signals from different parts of a neuron as well as from a small network of interconnected neurons. Up to date, whole-cell patch clamp recordings have been performed on different neuronal cell types, including retinal ones (16,17).

Below, we report the protocols to perform patch clamp on primary Müller cells isolated from mouse and from rat:

❖ To perform patch clamp recordings from Müller cells isolated from mouse, use borosilicate glass patch pipettes (GB150-8P, Science Products, Hofheim, Germany). Their resistance should be 5–7 MΩ when filled with the intracellular solution reported in (15). To perfuse the recording chamber, use the extracellular solution as described in (15). Record membrane currents of isolated Müller cells in the voltage clamp mode, according to (15);

❖ To perform patch clamp recordings from Müller cells isolated from rats, use a patch clamp amplifier (EPC10; HEKA Electronik, Lambrecht, Germany). The resistance of pipette is 8–10 MΩ when filled with recording solution described in (18). The content of external medium is reported in (18). Kir currents can be evoked through hyperpolarized voltage pulses from a holding potential of −80 mV in increments of 20 mV, according to (18).

Single channel recording can be performed on Müller cells in order to specifically examine single-channel properties, as the ones of a Kir4.1 channel, for example. Single-channel patch recordings can be carried out with borosilicate glass pipettes. The content of both the internal solution contained in pipettes, and the bathing solution are reported in (19). Data must be recorded at 5 kHz and low-passed at 1 kHz using an Axon 200B amplifier, according to (19).

In summary, both MIO-M1 cells and isolated Müller cells represent valuable in vitro model systems to investigate biological, molecular and electrophysiological properties of a fundamental component of retina. The glial retinal cells, either in healthy or pathological condition. The choice of the model depends on the experimental settings and requirements. Indeed, primary cultures are limited by restricted lifespan since cells, once isolated, undergo senescence and death: no long-lasting studies can be performed on them, differently from continuous MIO-M1 cell line. However, primary Müller cells can be directly isolated from disease animal models, also upon in vivo treatment of the models with drugs to be tested.

Provenance and Peer Review: This article was commissioned by the Guest Editor (Dario Rusciano) for the series “Preclinical Models in Ophthalmic Research” published in Annals of Eye Science. The article has undergone external peer review.

Conflicts of Interest: Both authors have completed the ICMJE uniform disclosure form. (available at https://aes.amegroups.com/article/view/10.21037/aes-21-36/coif). The series “Preclinical Models in Ophthalmic Research” was commissioned by the editorial office without any funding or sponsorship. The authors have no other conflicts of interest to declare.