Primary congenital glaucoma is developmental glaucoma occurring before the age of 3 years due to an obstruction that prevents adequate drainage of aqueous humor caused by abnormal development of the trabecular meshwork and anterior chamber angle. Anti-glaucoma medications have limited value in the management and the most effective therapy is surgical (1). However, we initially report a case of spontaneously resolved glaucoma at a 7-year follow-up and observe the differential development between the affected eye and the healthy eye. We present the following case in accordance with the CARE reporting checklist (available at https://aes.amegroups.com/article/view/10.21037/aes-21-42/rc).

A 6-year-old boy firstly presented at our hospital for ophthalmic examination on October 28th, 2013. We found the cornea of the left eye (LE) was larger than the other in horizontal diameters (Figure 1A). According to the parents’ complaint, the boy suffered from “photophobia and lacrimation in both eyes at times since birth”, but it relieved later. His parent denied other diseases and family history of glaucoma. 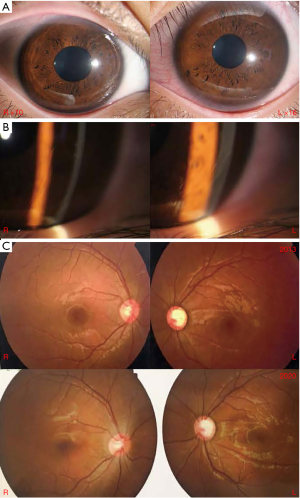 The best corrected visual acuity (BCVA) was 20/20 (Snellen) in the both eyes. The peak intraocular pressure (IOP) with daytime phasing Goldmann applanation tonometer (GAT) measured 12 mmHg in the right eye (RE) and 13 mmHg in the LE. The bilateral corneas were clear and the horizontal diameters were 13 mm in the RE and 14 mm in the LE. Anterior segment examination revealed the presence of Haab’s striae in the inferotemporal quadrant of the left cornea, which was otherwise clear (Figure 1B). Slit-lamp examination showed bilateral anterior chambers were deep, iris development is normal and bilateral crystalline lens were clear. Gonioscopy examination found bilateral anterior chamber angles were opened, and the anterior chamber angle of LE was full of the remnants of pectinate ligaments. Fundoscopic examination showed a cup to disc ratio of 0.4 in the RE and 0.8 in the LE (Figure 1C). A-scan ultrasonic examination showed the axial length (AL) was 24.0 mm in the RE and 25.1 mm in the LE. Optical coherence tomography (OCT) revealed the retinal nerve fiber layer (RNFL) of LE diffusely thinned and the average thickness was 57 µm while the other was in normal thickness of 89 µm. On cycloplegic refraction both eyes were hyperopic at +0.75 degree of sphere (DS) in the RE and +1.00 DS in the LE.

The boy was diagnosed primary congenital glaucoma in the LE and was protectively treated with 2% carteolol hydrochloride and 1% brinzolamide for 3 months. Considering the stable condition, the doctor didn’t operate a surgery and informed his parents of follow-up visit on time. Without anti-glaucoma medications or surgeries, the primary congenital glaucoma was spontaneously resolved. 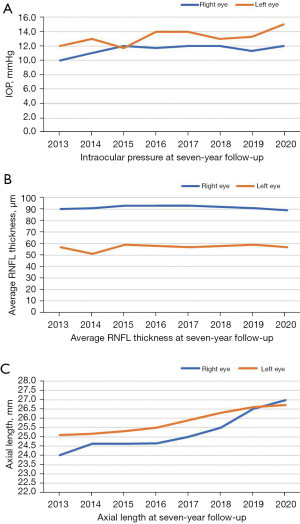 All procedures performed in this study were in accordance with the ethical standards of the institutional and/or national research committee(s) and with the Helsinki Declaration. Written informed consent was obtained from the patient’s parent or legal guardian for publication of this case report and accompanying images. A copy of the written consent is available for review by the editorial office of this journal.

Spontaneously resolved primary congenital glaucoma is rare and only several cases have been reported abroad (2-6). We report a case of spontaneously resolved primary congenital glaucoma at 7-year follow-up visit and observe the differential development between the affected eye and healthy eye in China. The boy firstly presented at our hospital with expanded corneas and ruptures in Descemet’s membranes (Haab’s striae) and apparently thin RNFL in the LE, but normal IOP of both eyes without anti-glaucoma medications or surgeries. At the 7-year follow-up, the IOP, a cup to disc ratio and RNFL were stable. The occurrence of spontaneous resolution of primary congenital glaucoma is supported by objective clinical evidence.

The exact mechanism for spontaneous resolution remains unknown but might involve continued postnatal maturation of the drainage angle (7). This makes the angle cope with the aqueous load leading to a reduction in IOP. Cupping reversal can be due to normalization of IOP in eyes with sufficient scleral elasticity that restores the diameter of the scleral canal (8). In this case, the cupping didn’t reverse. We still can see the cup to disc ratio of his LE is still stable compared to the first examination. Additionally, the visual field examination shows glaucomatous loss in accordance with the thinned RNFL (Figure 3). 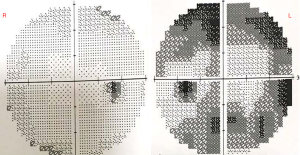 What interests us is the deferential development of bilateral optical axis. At the initial examination, the AL of RE was shorter than the LE when he was 6 years old. After 7-year follow-up visit, the AL increased almost 3 mm in the RE but 1.5 mm in the LE. So the bilateral ALs are almost the same now. In general, the affected eye usually becomes myopic as a result of the increased AL and the presence of Haab’s striae causes astigmatism. In this case, on cycloplegic refraction both eyes were hyperopic at +0.75 DS in the RE and +1.00 DS in the LE at the age of six. The RE is myopic at −2.25 DS while the LE is emmetropic at the age of 14. The AL measurements of both eyes at the first visit of 2013 were above normal values for child’s age. Optical biometry revealed the CCT was 505 µm and the lens thickness was 3.26 mm in the LE. Cronemberger et al. (9) showed controlling IOP had a positive effect on the CCT, HCD, and AL in patients with congenital glaucoma. In this case, the IOP of LE was normal between 10 and 15 mmHg. In our opinion, the LE with increased AL but still were hyperopic due to flattening of the cornea and backward displacement of the flattened lens to some extent. AL measurements of LE was 1.1 mm longer than RE in 2013, but it’s similar refraction in both eyes. It is mainly related to the difference in the corneal refractive power of the two eyes (RE is 40D while LE is 38D). The ruptures in Descemet’s membranes (Haab’s striae) of LE increased corneal astigmatism. Maybe this is another reason.

Spontaneously resolved primary congenital glaucoma still has possibility of reactivation. In the cases reported before, some patients suffered with primary congenital glaucoma reactivated again after spontaneous resolution (2). Therefore, it’s of great significance to follow up periodically with necessary examination and figure out the development of the affected eye, including AL and refraction state, taking a closer look to the effect of the disease on the affected eye (10). The parents expressed their willingness to adhere to follow-up for ophthalmic examination.

Spontaneously resolved primary congenital glaucoma is rare and the mechanism remains unknown. It may figure out the development and influence of the affected eye of the patient, including AL and refraction state with regular ophthalmic examination at periodically follow-up.

Funding: The research work was supported by National Natural Science Foundation of China (grant No. 81970847).

Reporting Checklist: The authors have completed the CARE reporting checklist. Available at https://aes.amegroups.com/article/view/10.21037/aes-21-42/rc

Conflicts of Interest: All authors have completed the ICMJE uniform disclosure form (available at https://aes.amegroups.com/article/view/10.21037/aes-21-42/coif). The authors have no conflicts of interest to declare.

Ethical Statement: The authors are accountable for all aspects of the work in ensuring that questions related to the accuracy or integrity of any part of the work are appropriately investigated and resolved. All procedures performed in this study were in accordance with the ethical standards of the institutional and/or national research committee(s) and with the Helsinki Declaration. Written informed consent was obtained from the patient’s parent or legal guardian for publication of this case report and accompanying images. A copy of the written consent is available for review by the editorial office of this journal.